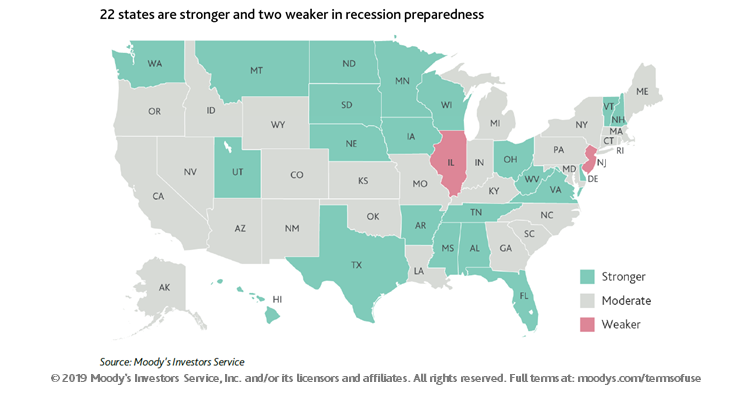 Wisconsin is one of 22 states considered to be in a strong position to weather the effects of recession, Moody’s says. And its fiscal strength has much to do with conservative reforms in recent years. #wiright #wibudget #wipolitics Click To Tweet

MADISON — The people who love it will tell you Wisconsin is a great place to live, work and play.

A new report by a leading credit rating company finds the Badger State also is a pretty good place to survive a recession.

Wisconsin is one of 22 states considered to be in a strong position to weather the effects of recession, according to the analysis by Moody’s Investor Services. Another 26 states are moderately well prepared for an economic downturn. Wisconsin’s neighbor directly to the south, well, not so much.

Moody’s ranks Wisconsin “stronger” in three of four key fiscal categories — Revenue Volatility, Coverage by Reserves, and Pension Risk — and “moderate” in Flexibility, or the ability for states to fluidly manage their fiscal situation.

Wisconsin’s strong credit position should come as no surprise. It certainly doesn’t to Moody’s, which continues to laud Wisconsin’s credit profile with an exceptionally healthy Aa1 rating.

Moody’s upgraded the state’s credit rating in 2017, the first for Wisconsin from the financial services firm since 1973. Former Republican Gov. Scott Walker at the time said the uptick reflected the “fiscal stability driven by bold reforms and accountable stewardship of the taxpayers dollars.”

When Walker and Republicans took control of state government in 2011, the state’s budget was in disarray. Wisconsin faced a $3.6 billion budget shortfall, bequeathed to them by Walker’s predecessor, Democratic Gov. Jim Doyle, and his liberal colleagues in the Democrat-controlled Legislature.

Reforms like Walker’s Act 10 (Budget Repair Bill), which required public sector workers to contribute more — or something — to their health insurance and taxpayer-funded pensions, helped turn a budget mess into routine budget surpluses.

Wisconsin is one of 10 states carrying a strong position in the revenue category, joining Nebraska as the only other Midwestern state noted for revenue strength.

The latest revenue data from the nonpartisan Legislative Fiscal Bureau project state tax collections over the next three years will come in at $753 million higher than previously anticipated. The more robust revenue figures are largely driven by higher-than-expected income and corporate tax collections.

As a result, the fiscal bureau projects the 2018-19 general fund balance will grow from $691.5 million, as estimated in January, to more than $1 billion by June 30, the end of the fiscal year.

Republican legislative leaders are considering a combination of more tax cuts (on top of the $8 billion-plus in tax relief over the previous eight years), debt reduction, and pumping more money into the state’s reserves or “rainy day” fund.

Moody’s ranks Wisconsin’s fiscal position as “stronger” on its Revenue Volatility score, based on an analysis of prior revenue volatility. The report tracks the greatest one-year revenue declines for each of the 50 states, between 2000 and 2018, scoring each state on whether they were above or below the standard deviation average.

“Vermont (Aa1 stable), Wisconsin (Aa1 stable) and Arkansas (Aa1 stable) have been the most stable as they don’t rely heavily on volatile revenue streams,” the report states, noting that a moderate recession could turn state revenues as volatile as they were in the Great Recession of 2008-09 “because many states have become more reliant on personal income taxes and on their highest earners.”

Wisconsin is one of 10 states carrying a strong position in the revenue category, joining Nebraska as the only other Midwestern state noted for revenue strength.

The state’s rainy day fund stood at $320.1 million at the close of the 2018 fiscal year, following a transfer of $33.1 million. Known as the Budget Stabilization Fund, the state now enjoys its “largest balance in state history,” according to the 2018 State of Wisconsin Annual Fiscal Report.

Moody’s applied its estimates of expected reserve levels to coverage of a revenue decline equal to the state’s largest one-year revenue decline. More than half the states fared well in this category.

Wisconsin is one of 26 states that has saved enough in its rainy day funds to cover a greater share of spending in fiscal year 2018 than in fiscal year 2007, the last full budget year before the downturn, according to a recent study by the Pew Charitable Trusts.

“The additional resources enabled states to increase their rainy day funds—also called budget stabilization funds—for the eighth straight year, reaching a record 50-state total of $59.9 billion,” the study states. “With these savings alone, states could have run government operations for a median of 23.2 days, also a new high, compared with 16.6 days just before the recession.”

Still, Wisconsin had enough in its stabilization fund to run government operations for just 6.8 days, well below most states, including Wyoming, which boasts more than a year’s worth of budget reserves.

As Moody’s notes, states with the most volatile revenues are those “relying on the highest earners through high and progressive personal income tax rates.”

Moody’s also ranked the Badger State “stronger” in pension risk. The Wisconsin Retirement System is the eighth-largest U.S. public pension fund and the 25th largest public or private pension fund in the world, and it has long been considered one of the healthiest. While the average funding level for U.S. public pensions is about 72 percent, the WRS is nearly fully funded, although some have asserted those numbers wouldn’t quite stand up to the scrutiny of private sector accounting.

Public pensions remain a big problem for Wisconsin’s neighbor to the south.

Illinois is one of three states — Connecticut and New Jersey are the others — that are most susceptible to risk from pension asset losses combined with revenue decline. Illinois’ massive unfunded pension liability grew to $133.5 billion at the end of fiscal year 2018, according to a legislative report issued in December.

Moody’s ranks Illinois and New Jersey as the two states “weaker” in recession preparedness. Illinois fares worst in pension risk and coverage by reserves in Moody’s analysis, and the state is middling in revenue volatility and financial flexibility.

Things could get worse for Illinois’ fiscal picture. Democratic Gov. J.B. Pritzker is trying to replace the state’s flat-rate tax with the kinds of progressive income tax systems that have gotten so many states in desperate financial straits.

As Moody’s notes, states with the most volatile revenues are those “relying on the highest earners through high and progressive personal income tax rates.”

The MacIver Institute has advocated for a “Glide Path to a 3 Percent Flat Income Tax” for Wisconsin.

A Glide Path to a 3 Percent Flat Income Tax

Fiscal flexibility was the one category where Wisconsin did not perform as well, receiving a “moderate” score in recession preparedness. That category is rated on a state’s ability to more quickly respond to an economic downturn, “such as whether a state’s executive branch has the authority to cut spending without legislative approval, and whether the state requires only a simple majority to pass tax increases and approve a budget.” Debt service, pensions and retiree health care, as well as Medicaid spending are all factored in.

Moody’s offers a note of caution for high-spending states, perhaps particularly to the states that, unlike Wisconsin, depend on federal funding for Medicaid expansion.

“Wide federal budget deficits and a rising debt burden have reduced the fiscal space of the United States compared with its position before the most recent recession. The federal government therefore might not be in a position to help states in the next recession as it has in the past,” the report warns.