The Kenosha School District will save almost $20 million a year in premiums by switching insurance carriers and ditching WEA Trust. District employees will also save $5 million. #wiright #wipolitics Click To Tweet

A recent decision by the Kenosha Unified School Board to change the district’s health insurance provider is not sitting well with the local teachers’ union, the Kenosha Education Association (KEA).

The school district will save almost $20 million a year in premiums by switching insurance carriers and ditching WEA Trust.

The plan selected by the board, United Healthcare, would replace the district’s previous provider, the Wisconsin Education Association (WEA) Trust. As the name suggests, WEA Trust was created in 1970 by the Wisconsin Education Association Council (WEAC) to insure public school employees, but has since expanded to cover a large assortment of Wisconsin public employees. While they are not owned by WEAC, they are still affiliated. 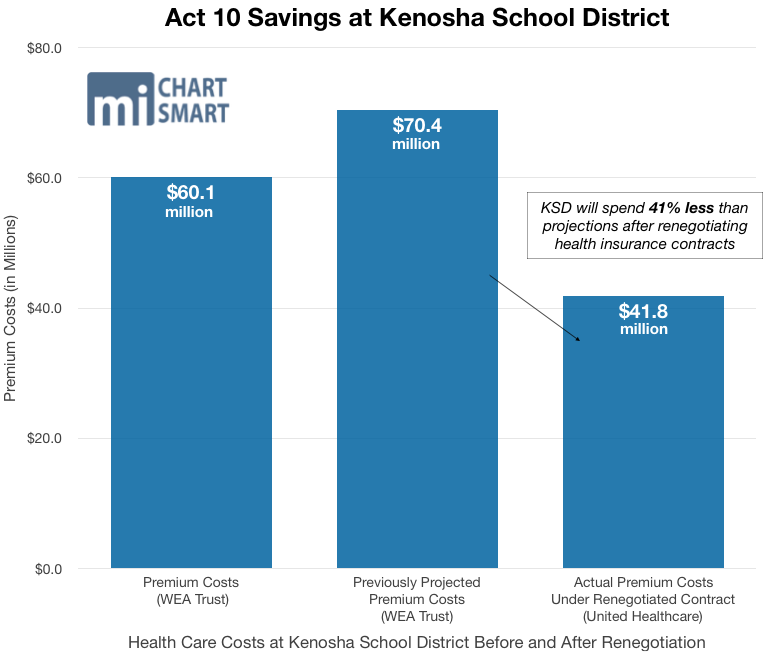 In 2012, one year after Act 10 was passed, WEA Trust endured a $70 million loss after losing a third of the schools it previously provided insurance for. With the increased freedom in their insurance market, school districts continue to transition from WEA Trust, which was often strongly encouraged or required for districts to choose in union contracts.

Like other school districts that also switched from WEA Trust after Act 10, Kenosha Unified will not be missing out on any savings.

Despite these savings, many district employees belonging to the KEA showed up at the school board’s vote to advocate on behalf of the WEA Trust. The union employees expressed that switching providers may cost Kenosha Unified its ability to retain and attract excellent teachers. The president of the school board responded by saying that the savings will allow the school district to keep class sizes low and have the potential for raises.

In the end, cost-effective measures won out over the will of the union.