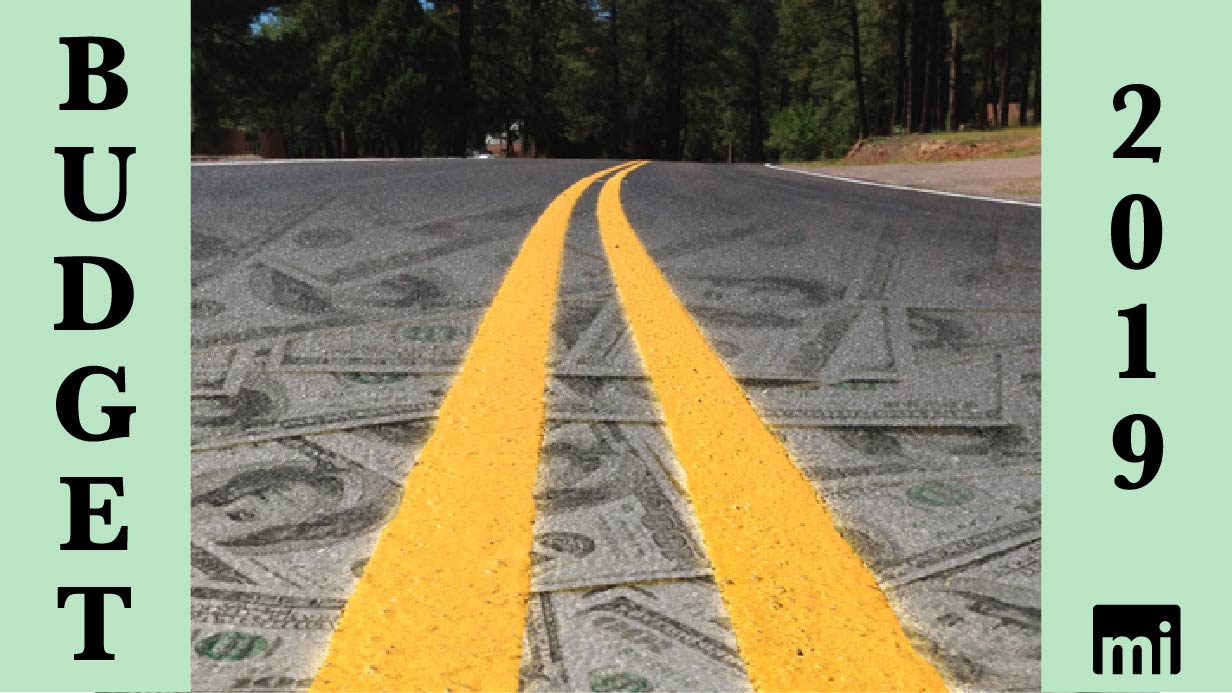 .@GovEvers' #wibudget raises the gas tax 8 cents a gallon and indexes it to inflation. That means the gas tax would rise with inflation without the Legislature ever taking another vote to do so. #wiright #wipolitics Click To Tweet

There are two good reasons Gov. Tony Evers saved transportation for the end of his budget address. It was the most contentious issue of the last budget cycle, and it was the only area in his address where Evers openly proposed raising taxes.

After indexing raises the gas tax another cent in April 2020 in addition to the initial 8-cent increase in the budget, it will be 41.9 cents – the seventh highest in the nation.

Ignoring that progress, Evers pointed to a report from TRIPnet, a Washington, D.C.-based organization that claims poor road conditions personally cost Wisconsin residents over $6.8 billion in repairs, delays, and accidents every year. That comes out to the unlikely amount of over $1,100 for every man, woman and child in the state. TRIPnet told the MacIver Institute it is funded by labor unions, insurance companies, and businesses involved in road construction. Its report gave Evers his springboard for higher taxes and fees.

“That’s why tonight, I’m proposing the largest biennial investment in transportation in Wisconsin state history. But this won’t be a one-time fix. We’re going to raise more than $600 million in new revenues to fix our roads, bridges, and highways and make sure that our transportation fund is sustainable for our future,” Evers said during his budget address.

And so, his budget raises the gas tax 8 cents a gallon and indexes it to inflation. That means the gas tax would rise with inflation without the Legislature ever taking another vote to do so. In other words, taxation without representation. The first indexing adjustment would take place in April 2020 and add another cent to the gas tax, effective immediately.

Wisconsin used indexing from 1985 until 2006, and there were still two additional gas tax hikes during that time. During the last ten years of indexing, the gas tax increased an average of 2.5 percent every year. When the practice ended in 2006, the tax had reached 30.9 cents, plus the 2-cent petroleum inspection fee for a total of 32.9 cents a gallon. Had indexing remained in place and continued at the rate of 2.5 percent a year, today in 2019, the total gas tax would be 44.5 cents per gallon – the sixth highest in the nation.

Evers also wants to increase heavy truck fees by 27 percent, add $10 to vehicle registration fees (bringing them up to $85 annually), and implement a hybrid vehicle fee. These taxes and fee increases would raise $608.7 million over the biennium. But don’t think for a moment that this means $608.7 million more will be going into the roads.

In total, Evers’ DOT budget increases funding by $537.7 million over the base. The current budget is $6.09 billion and Evers’ spending plan is $6.63 billion. 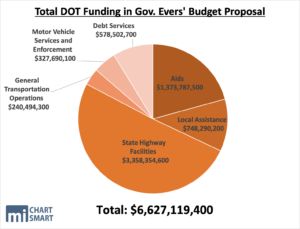 Evers said securing the new revenue through tax and fee increases is important because he wants to increase road improvements while minimizing the amount of road bonding in his budget. The DOT spent $357.6 million on debt service in the last budget, which equaled 18.7 percent of its transportation fund revenue. Transportation policy makers recommend that level not be allowed to exceed 25 percent.

“Because of our long-term solution to this issue, Wisconsin’s highway bonding in our budget is the lowest it’s been in over 20 years. It’s time we pay our bills and stop kicking the can down the road,” Evers said.

Evers’ transportation budget includes $329.2 million in new borrowing. That’s down from $402.4 million in the last budget and $805.4 million in the budget before that. The mega projects in Milwaukee have been a key driving force in the DOT’s bonding trends, which began in the 2005 budget and today are tapering off.

Between higher taxes and fees and new bonding authorization, Evers has $851.6 million in new revenues coming into the DOT for the biennium. A good portion of that will be used to backfill other revenue sources no longer available. Evers no longer wants to transfer GPR funds into the transportation fund, which leaves an $86 million hole. The DOT also received a one-time federal infrastructure grant last biennium for $160 million.

Evers’ executive budget for DOT features 32 separate proposals that include $629.7 million in new spending. Prior to his budget address, the governor said he wanted to shift resources towards local aid. His budget increases funding for General Transportation Aids (GTA) by $66.2 million and the Local Road Improvement Program (LRIP) by $1.9 million. That’s only $68.1 million more for local roads, while Evers’ tax and fee hikes will be bringing in over $600 million. Ultimately about half the tax and fee increases will support increased road spending and the other half will offset the loss of one-time federal grants and decreased bonding.

After everything shakes out, the big winner in Evers’ DOT budget is the state highway rehabilitation program. That covers all the maintenance work and smaller projects on state highways. It will get a $252.5 million increase over the biennium. Evers’ proposals include numerous nods to his special interests. It does away with the “Fed-Swap” law, which requires DOT to consolidate federal funding into as few major highway projects as possible. The axed reform saves money by limiting the number of projects subject to the more stringent and costly federal requirements, including prevailing wage. The budget would allow the DOT and DNR to use eminent domain to build bike paths and sidewalks.

It’s not surprising that he’s increasing transit aid by $13.8 million, transit capital assistance by $10 million, and passenger rail by $45 million. There’s also new money for bridges ($17 million) and freight rail ($30 million) in the proposals. Not including funding for GTA, LRIP, and Highway Facilities, his proposals add up to $156.4 million, which are supported by $131 million in bonding.

Evers’ new tax and fee revenue won’t be going to pay off debt either. Evers only wants to increase debt service by $29.5 million over the biennium.

At the end of the day, Evers can only claim he is adding $294.1 million to local and state road improvements, while increasing taxes and fees by $600 million. His critics could add that without bonding, Evers would only be increasing total road spending by $69 million.

No matter how you look at it, fewer than half the new taxes and fees on Wisconsin drivers will go to the roads.