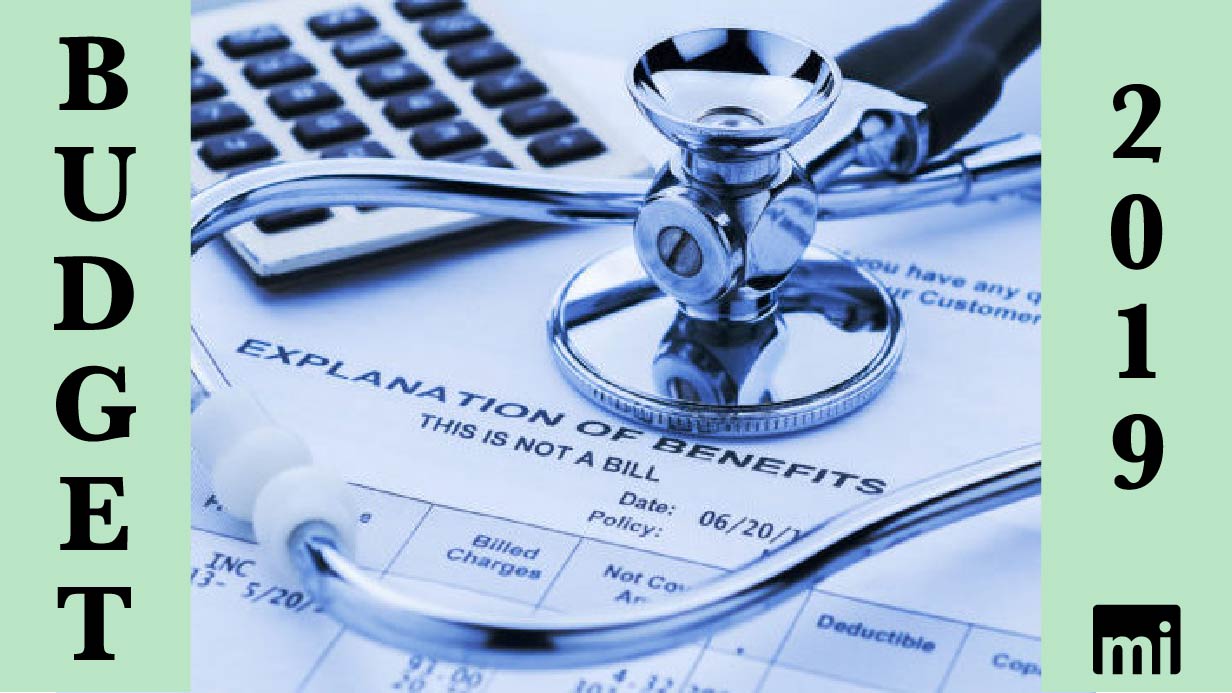 A health care budget in an age of spiraling costs should be a litany of ideas for reducing health care costs, empowering the market, and protecting the taxpayer from open-ended commitments. But Gov. Tony Evers’ 2019-21 budget proposal instead blows the lid off government’s involvement in health care. 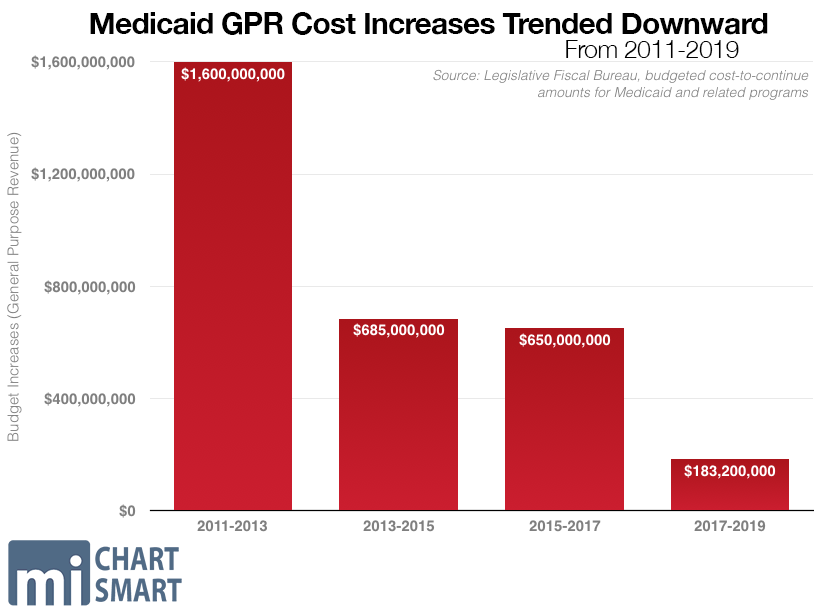 The massive increase is a sharp deviation from the trend during Gov. Scott Walker’s administration. The 2019 adjusted base spending for the second year of Walker’s final DHS budget is actually $293 million less than Walker’s recommendation, meaning spending came in lower than expected. While Walker’s budgets consistently increased spending on DHS—which administers the massive Medical Assistance program, including Medicaid—the size of the spending increases had been going down budget after budget.

Evers’ budget also increases the budget of the Office of the Commissioner of Insurance (OCI) by $200 million, mainly to fund a reinsurance program implemented during Walker’s tenure as an effort to hold down the cost of individual market insurance premiums, increases precipitated by Obamacare’s regulations. 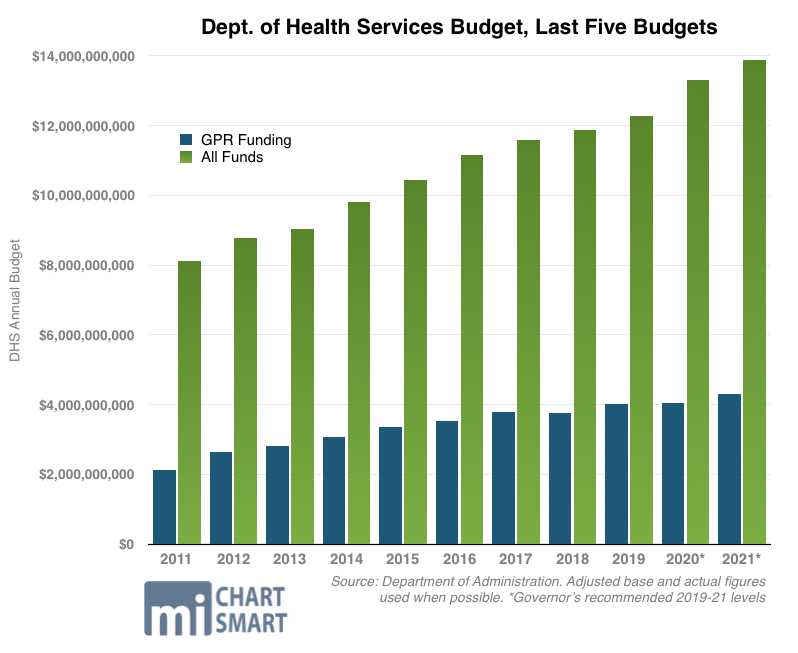 While the new governor’s budget exclaims Wisconsin faces a “human crisis” requiring a massive public-sector intervention to provide government health insurance, the numbers don’t back that up. In fact, Wisconsin has the 9th lowest rate of uninsured in the country, with 92 percent overall having insurance. Since 2010, the percentage of uninsured has dropped by more than 4 percent despite the state rejecting the costly federal Medicaid expansion under Obamacare.

Evers’ budget accepts the federal Medicaid expansion under Obamacare while significantly increasing spending on a wide range of programs.

The document proposes expanding Medicaid eligibility to everyone earning between 0 percent to 138 percent of the federal poverty level. In 2019, that income level is $34,638 for a family of four. The change would make 82,000 more Wisconsinites eligible for the program.

#wibudget: The federal gov, already $22 trillion in debt, is almost certain to go back on that 90% promise in the not-so-distant future. Nonetheless, @GovEvers' budget immediately spends the money, and then some. #wiright #wipolitics Click To Tweet

It’s important to note that while the number of people who become eligible for the program increases, that does not mean the newly eligible are without insurance now. With 92 percent of the population already insured—most of them through employer-based insurance—it’s likely a sizable share of those 82,000 newly eligible for government assistance already have insurance through their employers.

In short, the proposal seeks to encourage people to leave their private plans and seek increased dependence on a government program with poor health outcomes.

The budget asserts that expanding Medicaid will save $325 million in GPR across the biennium because of the federal government’s enhanced 90 percent match versus traditional Medicaid. The federal government, already $22 trillion in debt, is almost certain to go back on that 90 percent promise in the not-so-distant future. Nonetheless, Evers’ budget proposal immediately spends the money—plus a lot more—on increased reimbursement rates for health care providers and other new spending.

In all, the budget directs $580 million back to health care providers catering to Medicaid patients through the BadgerCare Plus program.

The Medicaid expansion is a cornerstone of Evers’ health care proposals. The plan spends all new federal dollars plus hundreds of millions more to greatly expand government’s role in health care.

The budget maintains Walker’s reinsurance program, aimed at holding down premiums on the individual health insurance market in the era of Obamacare’s skyrocketing premiums. 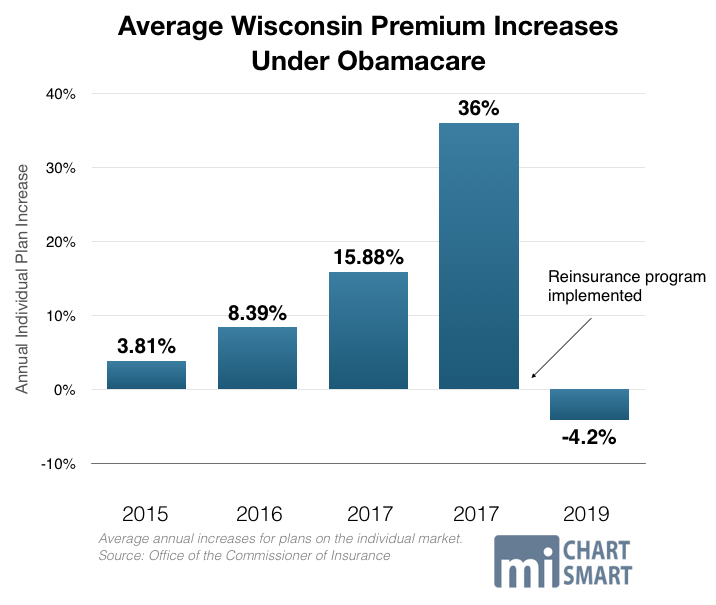 The reinsurance program was all but forced on Walker and Republican lawmakers in the wake of rapidly increasing premiums on the individual health insurance market. Headed into 2018, premiums were expected to spike by 36 percent, while 75,000 Wisconsinites were expected to lose coverage.

Only after the costly reinsurance tourniquet was applied to the state’s bleeding market did rates stabilize, with an average 4.2 percent weighted average premium decrease in 2019.

One cause of Obamacare’s price spiral was that health insurers fled the state to avoid massive losses. Anthem, Aetna, UnitedHealth, and Humana – four of the five largest health insurers in the country – as well as Molina and Health Tradition, all left Wisconsin’s market during the past few years. Molina returned only after the reinsurance program was implemented.

That left only one insurer in 11 Wisconsin counties, seven clustered in the northeastern part of the state where more than 581,000 people live. That insurer was Common Ground, a nonprofit insurance company established as part of Obamacare that has received more than $107 million in taxpayer supported loans since 2012.

In 2017, with a monopoly in those seven northeastern counties, Common Ground increased its individual insurance plan premiums by an astonishing 62.67 percent.

Ironically, Obamacare co-ops like Common Ground were established with the purported goal of increasing competition and reducing costs. It’s yet another glaring example of the myriad broken promises and lies of Obamacare, its apologists, and its expensive co-ops.

Common Ground, the Obamacare experience, and the costly reinsurance program are more warnings to taxpayers about the danger of government involvement in health care.

An eye to the Minnesota failure

Walker’s reinsurance plan was largely modeled on a similar but much more costly plan implemented in Minnesota in a last-ditch effort to spare the Gopher State’s middle class from catastrophic premium hikes in the wake of the state’s Obamacare expansion.

Hardly a role model to emulate, Minnesota’s embrace of “free” federal Medicaid money is actually a case study in failure that has cost taxpayers there nearly a billion dollars. In 2017, after Obamacare’s implementation and Minnesota Gov. Mark Dayton’s decision to expand Medicaid, the state found itself at risk of losing all the insurers on its individual market. On the brink of collapse, state bureaucrats allowed insurers to increase premiums by a staggering 50-67 percent. 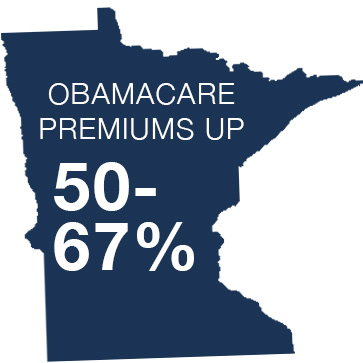 While lower-income Minnesotans didn’t feel the pinch because of federal subsidies for the poor, the state’s middle class was due to take a financial beating. That’s why state lawmakers were forced to implement the costly reinsurance program, which to date has cost state taxpayers north of $830 million — on top of the taxes they already pay to prop up Obamacare.

Health care costs have been used as a political bludgeon, with rampant distorted claims about costs. Then-candidate Tony Evers claimed that Wisconsinites pay 50 percent more for health coverage than Minnesotans, a claim rated as “Mostly False” by Politifact. Evers was only looking at a small slice of the population – those on the so-called Second Lowest Cost Silver Plan (SLCSP) on the individual market.

And contrary to the rhetoric, costs are virtually the same. The average annual premium in 2017 in Wisconsin was $5,868 for an individual and $18,785 for a family; in Minnesota it was $5,832 and $18,507, respectively. Employee contributions to the cost of their plans were virtually identical between the two states.

By accepting the Medicaid expansion as Minnesota did prior to the near-implosion of its individual health insurance market, Evers’ plan travels a dangerous path for taxpayers.

A series of critical Medicaid reforms enacted under Walker are also repealed wholesale by Evers’ budget, despite protections enacted during December’s extraordinary session.

Work requirements and health risk assessments for childless adults seeking Medicaid are struck. Walker increased from 20 to 30 hours a week the time that able-bodied adults (ages 19 to 49) without children must be working, training for work, or looking for work to receive BadgerCare health insurance. That’s the federal maximum, as even Democrats in Congress recognize that 30 hours is not too much to ask for. Evers’ budget rolls that back.

Nominal premiums of $8 for households earning from 51-100 percent of the federal poverty level are struck; requirements that recipients be in compliance with child support orders are struck; copays for non-emergency medical services are struck; and Medicaid Health Savings Accounts are eliminated entirely.

The budget implements a promising new model for expanding the pool of health care professionals, important because Wisconsin lags the nation in dental care access. According to the U.S. Department of Health and Human Services, there are 138 dental health professional shortage areas in the state of Wisconsin. A MacIver Institute policy brief explores problems with dental care access and outcomes here.

Evers’ budget takes steps to address these problems, but it spends a lot of taxpayer money along the way—$43 million.

While it implements a dental therapy license in Wisconsin to increase the dental professional workforce, the proposal comes with a hefty price tag. It spends $1.5 million to subsidize educational institutions who add a dental therapy program, with the goal to “put Wisconsin on the cutting edge of this emerging career field…”

In addition to expanding spending to the tune of tens of millions of dollars for dental care under BadgerCare Plus and Medicaid, the budget also increases spending on a series of programs aimed at in-need populations and at grants for dentists who practice in rural areas or provide care to the disabled.

Throughout the campaign, enacting protections for people with pre-existing conditions was a political football. In one of its last actions in the December extraordinary session, the GOP-controlled Legislature passed a bill essentially replicating Obamacare’s regulations on pre-existing conditions. But Democrats argued that the bill didn’t go far enough and should essentially re-create Obamacare and all of its onerous regulations at the state level.

Evers’ budget does that.

The budget directs the newly empowered Office of the Commissioner of Insurance to draft plans to implement all these regulations.

It proposes requiring drug companies to justify price increases, disclose proprietary information like production and marketing costs, and requires the OCI to post the information in the name of transparency.

The budget also requires pharmacy benefit managers to register with the state and “disclose price concessions they receive from drug companies” and calls for importing generic drugs from abroad to Wisconsin.

Our preliminary budget analysis, along with our deeper look into its transportation and K-12 education components revealed a budget rife with overtures to—and money for—a massive number of liberal initiatives and interests. That pattern holds true in nearly all of Evers’ health care proposals, a wish list for the big government left.

The Joint Finance Committee will begin its work parsing through the document next month. As always, MacIver will be here with in-depth analysis and coverage.