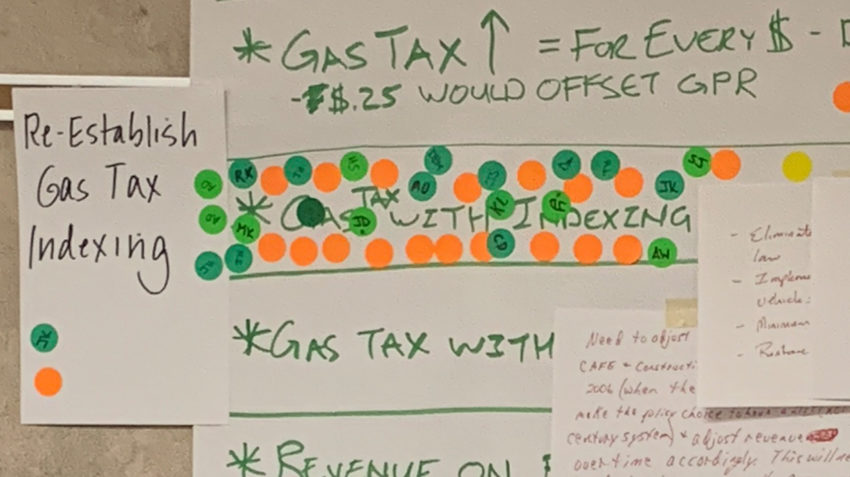 LA CROSSE, Wis. — Gov. Tony Evers’ Transportation task force has spent the past couple of days weighing all kinds of tax-and-fee-increase ideas, but members appear to overwhelmingly support a hike in the state’s gas tax and a return to gas tax indexing.

In short, fears by legislative fiscal hawks that the Transportation Stakeholder Task Force would be nothing more than a “tax force” seemingly have come to pass.

In its second day-long meeting Monday, task force members were asked to place green dot stickers on the “revenue options” they most fancied, and red dots on the ones they didn’t like.

The resounding favorite was a 5.5-cent increase on the state’s motor fuel excise tax, a proposal blanketed in green. Doing so would raise Wisconsin’s fuel tax, already one of the highest in the nation, from 30.9 cents to 36.4 cents per each gallon of gasoline.

A Department of Transportation information packet notes a 1-cent per-gallon increase on the motor fuel tax would generate approximately $33 million annually. The tax hike would raise more than $180 million in new revenue, enough, the DOT asserts, to prevent Wisconsin’s backbone road systems from deteriorating in the coming years, and stop county trunk roads from further falling into poor condition.

Task force members also really like bringing back excise indexing, eliminated by the Legislature in 2006. According to the DOT, indexing, or tying the tax to the Consumer Price Index, would raise $55 million in additional annual revenue by the third year of implementation, if indexing is not used to “catch-up.”

The task force is expected to make its recommendations to Evers. The Democrat will use the findings to help build his 2019-21 state budget proposal, expected to be released by the end of the month.

“We are not doing this for any other reason than to truly gain your input and find out where we can find the most consensus for a solution for a transportation system that is not meeting the needs of the economy that we have right now,” Craig Thompson, Evers’ Department of Transportation Secretary-designee, said in Madison Thursday during the first of the two scheduled task force meetings.

As MacIver News reported last week, Thompson, a long-time lobbyist for transportation interests, hasn’t made much room at the table for fiscal restraint. Discussions were revenue heavy, and very light on reform of a state transportation agency that has wasted billions of taxpayer dollars, according to a legislative audit.

While Thompson declared the invitation-only task force to be the “most inclusive group” assembled to talk about transportation issues, not one representative from taxpayer advocacy groups was invited.

“A lot of it is an issue of revenues, and we’re hopeful that you’ll take that on and come to a good conclusion there,” the governor told a task force made up of government officials, transportation trade groups, and unions.

While hiking the fuel tax and restoring indexing garnered the most support, the task force addressed a long list of potential revenue “enhancers.”

One of the many hand-written posters detailing the various options noted the pursuit of $360 million of additional revenue for the next budget, and that task force members were “Open to increased funding beyond this level.”

There was some interest in a proposal that would implement a 5 percent sales tax on motor fuel, something Wisconsin consumers currently don’t pay.

“If the exemption were eliminated and all revenue were directed to the Transportation Fund, we estimate that by the third year we would raise about $475 million in additional revenue annually,” a DOT presentation of revenue options notes. While Illinois and Michigan impose such a tax, the cost to consumers and service stations can’t be ignored.

Other ideas under deliberation included the ever-discussed tolling, increasing registration fees, a title fee increase, and a sliding annual registration fee on new vehicles based on the vehicle’s value. The progressive fee would continue over the life of the vehicle registration in Wisconsin.

Another proposal would divert a portion of the sales tax on automobiles and auto parts from the state general fund to the transportation fund. Redirecting the full amount would generate about $630 million annually by the third year, according to the DOT, but Wisconsin has been down the fund diversion road before.

The plan with the most “Big Brother” potential would charge Wisconsin registered motorists an annual fee of 1.02 cents per mile, with the first 3,000 miles exempted. It eventually would generate about $325 million annually, but the self-reporting system would be costly to implement and is one step removed from government monitoring of motorists.