Welcome back to Our Wisconsin.

While society has changed around us, one institution has remained largely constant: the classroom. However, new innovations are slowly moving the landscape of both K-12 and higher education. The fourth edition in the “Our Wisconsin” series takes a closer look at education.

From tele-education to the school choice movement, innovation and technology have brought new methods of learning into our lives. In 1990, impoverished families in Milwaukee were first allowed the opportunity to send their children to private schools they otherwise couldn’t afford. That program has grown rapidly, now enrolling tens of thousands of young Milwaukeeans, and similar programs have launched in Racine, statewide, and across the country.

With the implementation of annual report cards, the state has vastly improved its transparency and reporting in the education realm. However, clear disconnects exist: while more than 123,000 students attend schools ranked as “five star” institutions, fewer than half of all Wisconsin students are proficient in math or English. That’s why we must continue to keep our eyes on the many, many figures provided to us by the state and other entities like the ACT.

The University of Wisconsin System boasts one of the best research institutions in the country. Half of all state workers are employed by the UW, and thousands of students make their permanent homes in the state after first being drawn here by our excellent schools. Still, many come to college woefully unprepared, resulting in four-year graduation rates below 40%.

As we close in on Gov. Tony Evers’ first budget address, education will be a massive priority in the months to come. Though enrollment has fallen significantly over time, there is no shortage of new programs or new ideas for infusing more money into the system. As always, we’ll be here to break down every important detail.

Don’t take Gov. Evers’ word for it, or any other politician for that matter. Don’t let the media tell you what you should think. Decide for yourself. Stay tuned for more editions in the weeks to come, before Gov. Evers releases his first budget plan. 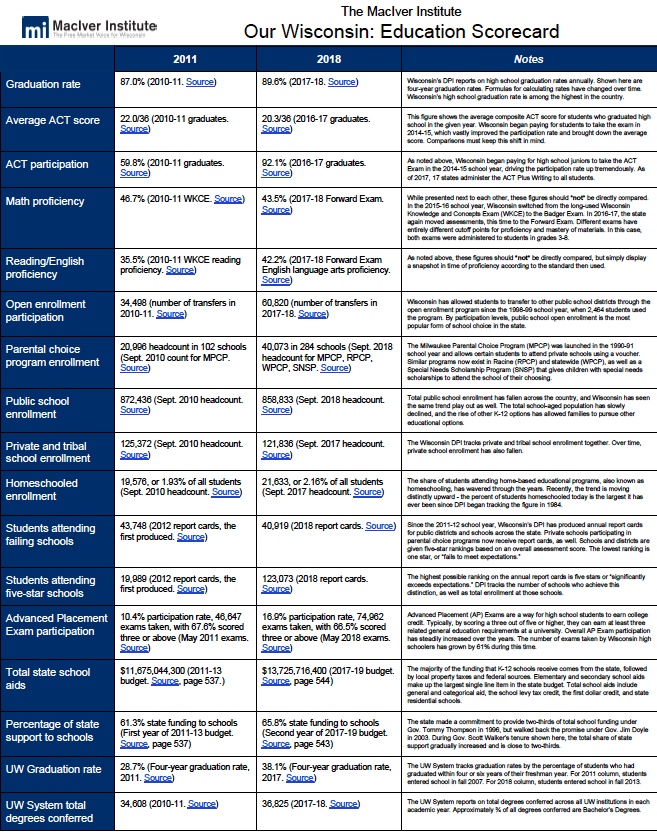 2011 column is to be considered the beginning of Gov. Scott Walker’s term, and 2018 the end. For the 2018 column, most recent publicly available data may be for 2017 or earlier, as noted. As Gov. Evers goes into his first term, we will add a new column to track success under his administration when data becomes available.