.@GovEvers wants to commit Wisconsin to the terms of the useless Paris accord, but in doing so he ignores all the progress toward clean energy made before he took office. #wiright #wipolitics Click To Tweet

Gov. Tony Evers must have needed an easy win on Tuesday, when he vowed to fight climate change by committing Wisconsin to the terms of the Paris accord. That agreement calls for a 26-28 percent reduction in greenhouse gases from the 2005 levels by 2025 – something Wisconsin already made enormous strides toward long before Evers got elected.

The U.S. Energy Information Administration (EIA) keeps detailed records on energy production, consumption, and emissions. According to its data, Wisconsin’s residents, businesses and government have increasingly demonstrated their commitment to the environment.

Between 2005 and 2016, Wisconsin reduced its carbon dioxide emissions by 14.4 percent and overall energy consumption dropped by 10 percent. Wisconsin’s use of coal for energy production dropped 32 percent between 2005 and 2016, according to EIA’s data. The result of all these trends – today Wisconsin gets 20 percent of its energy from non-carbon sources (that includes all renewables and nuclear). 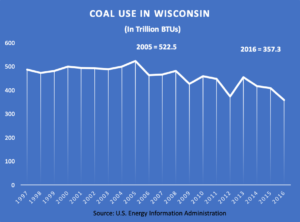 As WE Energies noted in its annual report last year, “Our customers’ use of electricity and natural gas has decreased as a result of continued individual conservation efforts, including the use of more energy efficient technologies. Customers could also voluntarily reduce their consumption of energy in response to decreases in their disposable income and increases in energy prices.”

Wisconsin’s renewable portfolio standards (RPS) also had an impact on these trends. That law required that 10 percent of the state’s electricity come from renewable sources by the end of 2015. That bill sailed through the Republican controlled legislature, and Wisconsin achieved the 10 percent goal two years early in 2013 during Gov. Walker’s watch.

The Wisconsin Public Service Commission (PSC) predicted in 2016 that renewable energy would continue to make up a larger percentage of the state’s energy production.

“Rather than being driven by future requirements of the Wisconsin RPS, this growth trend is driven by other forces, such as market opportunities, customer demand for additional renewable energy, and multiple processes involved in citing new projects. Therefore, actual production could be lower or higher than these aggregated electric provider estimates,” according to the PSC.

Regardless, Evers seized on the opportunity to downplay the free market and Wisconsin’s previous leadership on the issue of environmentally responsible energy.

“It’s a new day in Wisconsin and it’s time to lead our state in a new direction where we embrace science, where we discuss the very real implications of climate change, where we work to find solutions, and where we invest in renewable energy,” Evers said, according to Wisconsin Public Radio.

Welcome to the party, governor.