Evers' pick for DOA secretary, Joel Brennan, is taking home $152,755 a year, about 20 percent more than his predecessor. He'll earn $1 less than his boss. #wiright #wipolitics Click To Tweet

Transportation Secretary-designee Craig Thompson will make $145,017 per year, a 23 percent increase compared to his predecessor Dave Ross, who took home $117,254.

Many of the Democratic governor’s key appointees received double-digit salary increases, according to the state Department of Administration spreadsheet of cabinet salaries.

Speaking of the DOA, Evers’ pick for secretary, Joel Brennan is taking home $152,755 a year, about 20 percent more than former Gov. Scott Walker’s DOA Secretary, Scott Neitzel, according to 2017 salary information. Neitzel left that post in 2018, and was succeeded by Ellen Nowak, who made $134,000  according to news reports. Brennan will make 11 percent more than Nowak. Brennan will earn just $1 less than his boss. Evers is set to make $152,756 annually, according the Legislative Reference Bureau.

Brennan ran Milwaukee Mayor Tom Barrett’s failed bid for governor in 2002 and his successful mayoral campaign two years later. He most recently served as head of the nonprofit Discovery World, a science and technology museum in Milwaukee.

Palm served in the Obama administration as senior counselor to the Secretary of Health and Human Services. Before that, she worked for five years as health policy advisor to then-U.S. Sen. Hillary Clinton.

Palm’s No. 2 at DHS, Deputy Secretary Julie Willems Van Dijk, will make $136,801, making her one of the highest paid officials in Evers’ cabinet.

Transportation Secretary-designee Craig Thompson will make $145,017 per year, more than a 10 percent increase compared to the salary of his predecessor, DOT Secretary Dave Ross. Ross made $132,184 in his final year as secretary.

Thompson led the Transportation Development Association before being tapped as Evers’ choice for transportation secretary.

State Rep. Joe Sanfelippo questioned the hefty salary bumps in the executive branch. The West Allis Republican said the increases were “unheard of” but not surprising coming from a governor who has already proposed billions of dollars in additional spending in advance of his biennial budget plan, expected to be released later this week.

“It’s just emblematic of what I expect to see coming out in the budget Thursday,” Sanfelippo said. “(The governor) has no regard for how hard taxpayers have to work and he’s proving it by just throwing money around left and right.”

Department of Natural Resources Secretary-designee Preston Cole will pull down nearly $147,000 a year, an 11 percent increase over his predecessor, DNR Secretary Dan Meyer, who made $132,184 in his final year.

Peter Barca, Evers’ pick for Department of Revenue secretary, will haul in nearly $145,000, a 14 percent increase above the salary of the previous secretary, Richard Chandler.

Secretary salary ranges are set in the state Division of Personnel Management 2017-19 Classification and Compensation rules established by Chapter 111 and Chapter 230, in Wisconsin statutes, and the associated Administrative Rules. Officials from the DPM did not return MacIver News Service’s multiple requests for comment on the cabinet members’ salary increases.

The Department of Workforce Development Secretary-designee Caleb Frostman will receive an annual salary of $140,000 a year, a 10 percent increase from his predecessor, Ray Allen.

And Evers’ Agriculture, Insurance, Veterans Affairs and Tourism directors will all make $130,000 annually, in some cases, thousands of dollars more than their predecessors. The tourism post comes with a 14 percent salary increase.

The double-digit raises are a departure from the Walker years.

In 2011, when Walker took office, a majority of his cabinet members earned less than Gov. Jim Doyle’s secretaries, according to a salary comparison published at the time by the Isthmus.

In 2011, when Walker took office, a majority of his cabinet members earned less than Gov. Jim Doyle’s secretaries, according to a salary comparison published at the time by the Isthmus, a Madison-based liberal news organization. In most cases, when Walker cabinet secretaries did receive wage bumps, the increases were relatively small, $2,000 or less.  Walker’s deputy secretaries were, in general, paid more than Doyle’s, but, overall, cabinet level salaries were lower under Walker.

On the campaign trail last year, Evers said he wanted lawmakers to be paid the same as first-year teachers, or about $37,000 a year. The salary for lawmakers is $52,999, a 4 percent increase in the previous biennium.

Evers didn’t say anything on the campaign trail about raising cabinet member salaries by more than 20 percent. 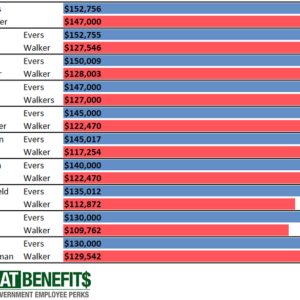 Ola Lisowski contributed to this report.