Marklein asked Thompson whether he had approved a non-competitive bid for a stretch of the $1.2 billion reconstruction and expansion of Interstate-39/90. Not yet, Thompson said. #wiright #wipolitics Click To Tweet

MADISON, Wis. — Gov. Tony Evers’ pick for transportation secretary is weighing an expensive decision, one that could cost taxpayers millions of dollars or cause lengthy delays for a major transportation project.

The DOT awarded the contract to a partnership, single bidder, despite the fact that the bid came in at $20 million over the estimated $100 million project cost.

Department of Transportation Secretary-designee Craig Thompson was in the hot seat Wednesday at a hearing of the Senate Committee on Transportation, Veterans & Military Affairs.

Thompson, who spent years working for transportation interests before Evers tapped him to lead the DOT, formally introduced himself to a committee that holds significant sway among their colleagues in the Senate, charged with confirming or rejecting the Democrat’s nominee. 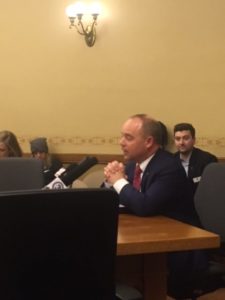 Several Republicans have expressed concerns about Thompson’s lobbyist past, something he attempted to downplay. Thompson led the Transportation Development Association for nearly a dozen years, but he told the committee that the TDA did very little actual lobbying on legislation over his tenure. Still, the organization’s mission as an advocate for transportation-related interests — from contractors and big labor to local governments — is crystal clear.

Sen. Howard Marklein (R-Spring Green) posed the question that many of his Republican colleagues have asked.

“For the past number of years you have worked for the TDA and with the road builders. What assurance can you give taxpayers that in your role as secretary you’re going to be working for the taxpayers of the state of Wisconsin?” Marklein asked.

“The assurance I would have is that my interest is in improving the transportation network for the users …” the secretary-designee said. “The folks that are involved in building the system, at the secretary level we don’t get involved at all in who wins contracts and who doesn’t win contracts.”

The secretary certainly signs off on contracts, however, and Thompson faces a $100 million decision in that regard.

Marklein asked Thompson whether he had approved a non-competitive bid for a stretch of the $1.2 billion reconstruction and expansion of Interstate-39/90.

Not yet, Thompson said. But his agency has. The DOT awarded the contract to a partnership, single bidder, despite the fact that the bid came in at $20 million over the estimated $100 million project cost.

“The department awarded the project, but all that means is they allowed it to go forward to the secretary,” Thompson said in an interview with MacIver News Service following Wednesday’s committee hearing. “If I would sign it then I would be executing it. Then I would send it to the governor and he would have to sign it and then it would be executed.”

The bidding partners, (Rock Road Companies Inc. of Janesville and Hoffman Construction Co. of Black River Falls, according to Thompson) have handled the brunt of the 45-mile expansion project, from the Illinois state line to the U.S. 12/18 interchange near Madison.

‘So, We Started With, Obviously, A Gas Tax Increase’

Rock Road is a member of the TDA, according to its website. So is Hoffman.

Thompson said five other contractors put together bid plans but ultimately decided not to submit a bid.

“I don’t know why that is. Some had said that the timelines to get it done were very compressed and that the penalties were very high and some decided it was too high a risk.”

Wisconsin taxpayers have been stuck before with the higher-than-expected tab from single-bid projects.

So the I-39/90 partnership of Rock Road and Hoffman got another winning bid — at $20 million over estimate.

Wisconsin taxpayers have been stuck before with the higher-than-expected tab from single-bid projects. A 2017 audit of the State Highway Program by the nonpartisan Legislative Audit Bureau found that the DOT could have saved taxpayers $44.7 million had it obtained more than one bid for 363 of its construction projects over a 10-year period.

Thompson told the transportation committee that 11 of 12 DOT lettings last year were over budget, after the agency saw significant competitive bidding savings in 2016 and 2017.

Now, Thompson says he faces a difficult decision on the I-39/90 project.

“If we send it out to rebid we know we’ll delay the project, but we could save enough money it would be worth it,” he said.

Thompson told the committee that DOT engineers “believe they underestimated costs” in the project, and that they don’t believe that the contractors’ bid was “out of line.” The 2017 audit found the DOT failed to consider the full and future costs of a number of projects, adding to the agency’s waste of taxpayer money.

“What I would hate would be to not really save any money or it could come in higher (on rebid) and the project would still be delayed,” the secretary-designee said.

Thompson seemed to please committee Democrats, who doubled down on “revenue enhancements.”

While he said he is committed to finding efficiencies, Thompson said the DOT needs an additional $360 million to $400 million biennially to meet the basic needs of Wisconsin’s transportation system. He, like his boss, warned of rapidly deteriorating roads and the ultimate cost of not fixing them.

Thompson echoed the findings of his hand-picked Transportation Stakeholder Task Force, which recently adjourned after two meetings with full-throated endorsements of a 5.5-cent fuel tax increase and the return of gas tax indexing.

“So, we started with, obviously, a gas tax increase/indexing to raise enough revenue to not only be able to pay for state roads and highways but also to filter down to the local governments as well,” Racine County Executive Jonathan Delagrave, a member of the task force said, repeating the tax-increase refrain of road builders and government bureaucrats.

The Senate is expected to vote on Thompson’s confirmation in the coming weeks.