For more than 40% of WI students, education ends in high school - at least that's their plan. Fewer than 60% of 2018 grads went on to secondary education and 10% of students don't graduate in four years. #wiright #wiedu #wipolitics Click To Tweet

More Wisconsin high school students are graduating in four years, and there’s good news on Advanced Placement participation and attendance, according to an expansive new data release from the Department of Public Instruction (DPI).

89.6 percent of Wisconsin high school students graduate in four years, according to a new data release.

At the same time, the report shows a troubling increase in student behavioral issues, with an increase in campus cases of assaults, drug use, weapons violations and other endangering behavior leading to a significant increase in school expulsions.

The dataset focuses on the class of 2018 and includes metrics such as graduation rates, Advanced Placement (AP) Exams, attendance, dropout rates, and post-graduation plans. Enrollment figures for the 2018-19 class are also included. 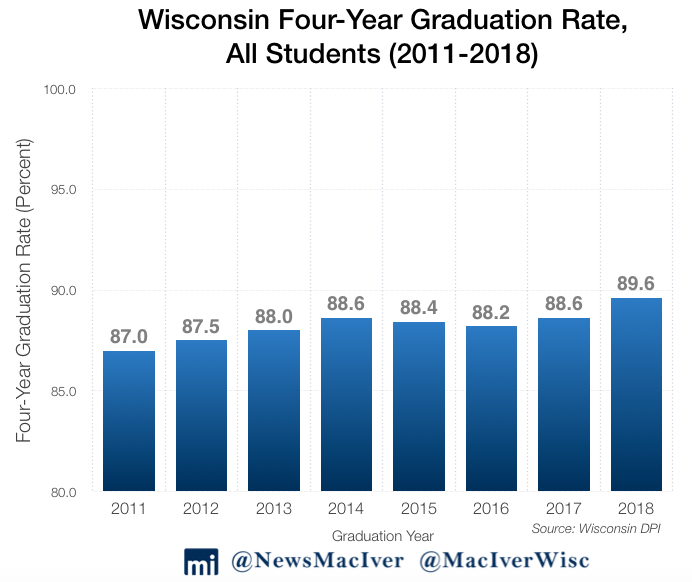 More high school students are taking AP Exams, and perhaps more significantly, more students are scoring well on those exams. Students with an AP Exam score of three or higher are awarded college credit at many universities, including in the University of Wisconsin System.

Even as the number of exams taken increased by 2.5 percent in one year, scores also continue to increase. Approximately two-thirds, or 66.5 percent, of AP Exams that students took in May 2018 had scores of three or higher. The previous year, 65.9 percent of exams were scored three or better.

The overall participation rate remains low, at 16.9 percent in 2018, but has gradually increased since 2010. In 2017, 16.4 percent of high school students statewide took an AP Exam. 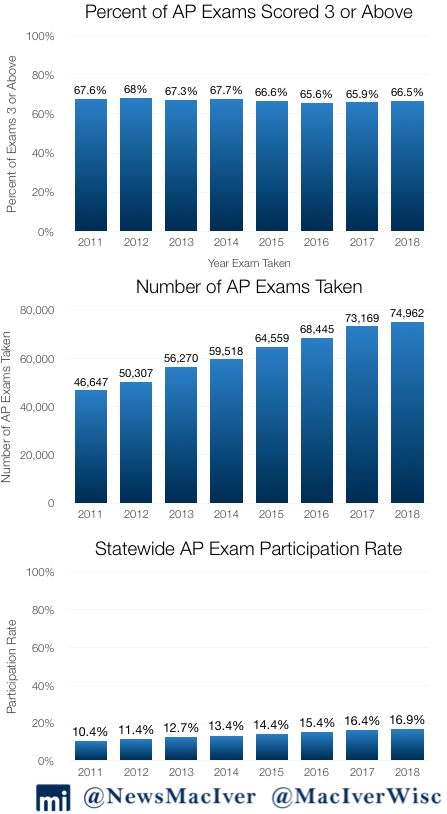 Postsecondary enrollment for all students also fell dramatically, continuing a strong trend of students opting out of college in recent years. For students who graduated in 2018, 59.4 percent are enrolled in some institute of higher learning. Currently, 66.1 percent of 2017 graduates and 68.3 percent of 2016 graduates are enrolled. The data include students who attend public or private two- or four-year colleges, technical schools, or training programs.

That particular set of data is updated twice a year when the state receives new enrollment figures, after students complete gap years or decide to go back to school. This time last year, 61.6 percent of 2017 graduates had enrolled in a college or trade school of some sort.

Clearly, students are making different choices than those before them. As thousands more chose to take AP Exams each year, many others opt out of college altogether.

School discipline rates are part of a new set of data first published in Wisconsin’s WISEdash system for the 2016-17 school year. Those figures show a troubling increase in incident reports involving students — from assault, drugs and alcohol, endangering behavior, weapon related, and all other violations of school rules, the incident rate for all students increased to 8.1 percent in 2018. The prior year, the student incident rate was 6.8 percent.

The dataset shows an increase in discipline rates at schools across the state.

Overall student enrollment continues to fall, though the 0.15 percent decrease is smaller than in recent years. The third-Friday headcount last September showed that 858,833 children attend Wisconsin K-12 schools. The previous year, the headcount had fallen by 0.43 percent.

Wisconsin has seen declining enrollment in its schools for years. At the same time, spending on the public education system has increased dramatically. The issue will be particularly crucial in the months to come, as Gov. Tony Evers introduces his first biennial budget.

“A high school diploma is a ticket to the future,” new State Superintendent Carolyn Stanford Taylor said, congratulating the class of 2018 in a statement. “Graduation is to be celebrated because it improves students’ opportunities for better jobs, income, and further education, which contributes to life success.”

The data release comes earlier than in previous years. Read our coverage from last year’s release here, and our deeper dive on achievement gaps and districts of particular interest here.