A new data report shows that Wisconsin schools spend almost half their revenue on overhead with only 54 percent actually going toward classroom instruction. The release demonstrates how little of the $6 billion in annual state education funding actually makes it to the classroom.

Wisconsin’s public school districts spend an average of 54 percent of total costs on instruction, according to a new data release. District costs per student total $13,182.

The figures come from the 2016-17 school year and are the most recent numbers available from the Department of Public Instruction (DPI). That year, the state average “cost per member,” or amount of money that districts spend on each student, was $13,182.

Taxpayers may be surprised to learn that just a slim majority of all K-12 education spending reaches the classroom. An average of $7,122 goes toward classroom instruction of each student. The largest part of instruction costs is the salaries and benefits of classroom teachers, teaching anything from reading and math to physical education.

If top-heavy overhead were reduced, the teachers doing the vast majority of meaningful work in schools could perhaps be better compensated. Instead, the many secondary and tertiary roles schools have taken on directly compete with the primary reason for schools’ existence: educating children. 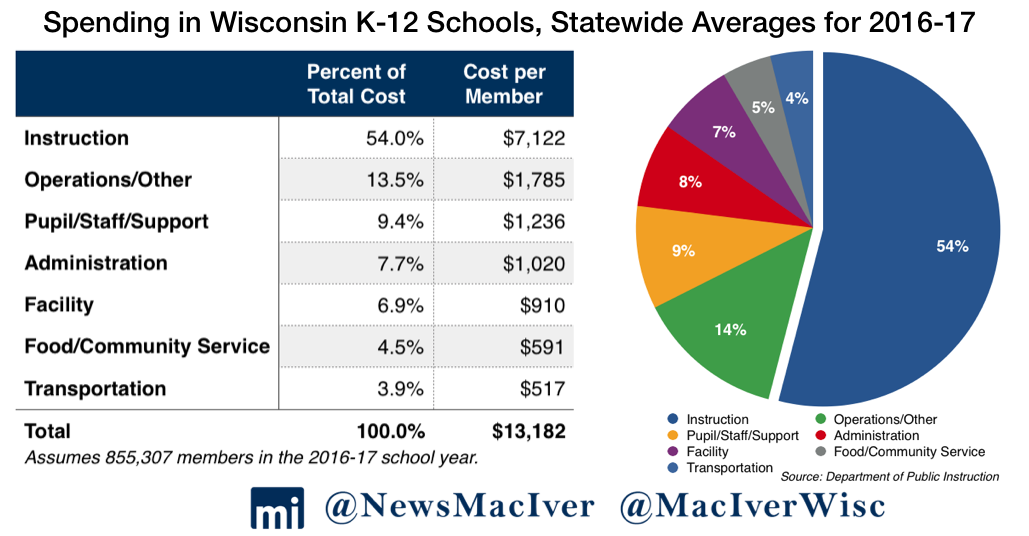 “Operations/other” is the second largest spending category by percentage statewide, which  takes up 13.5 percent of budgets on average. That catch-all category includes line items such as central services, maintenance, debt service, insurance, and post-employment benefit debt.

Administration costs take up 7.7 percent of total spending, comprising of school business offices, administrative assistants, building and grounds departments, and other related functions. That category used to be included within operations/other, but DPI began separating out administration costs in 2017.

After operations/other, the next biggest spending category is pupil/staff/support. That includes expenses such as guidance counselors, school nurses, and professional development support for staff.

District cost breakdowns vary widely. The report shows Barneveld spent the most on instruction (70%), while Grantsburg spent the least (29%). Grantsburg also had the highest administrative costs (24%).

MacIver has reported on high costs at central services buildings in the past, especially at Milwaukee Public Schools (MPS), the state’s largest public school district. MPS’ 2018-19 budget, for example, includes funding for 356 administrators. Of the 336 administrators with publicly reported salaries, those individuals earn an average of $126,808 including fringe benefits. At central office alone, 78 administrators earn an average total salary of $111,624. That’s more than five times the median per capita income in the city of Milwaukee, and almost three times the median household income in the city.

The top-heavy MPS administration has also grown in recent years. Since 2008, the number of officials, administrators, and managers has doubled. The district employs 27 percent fewer elementary and secondary classroom teachers than it did in 2008. At the same time, student enrollment is down almost 15 percent. 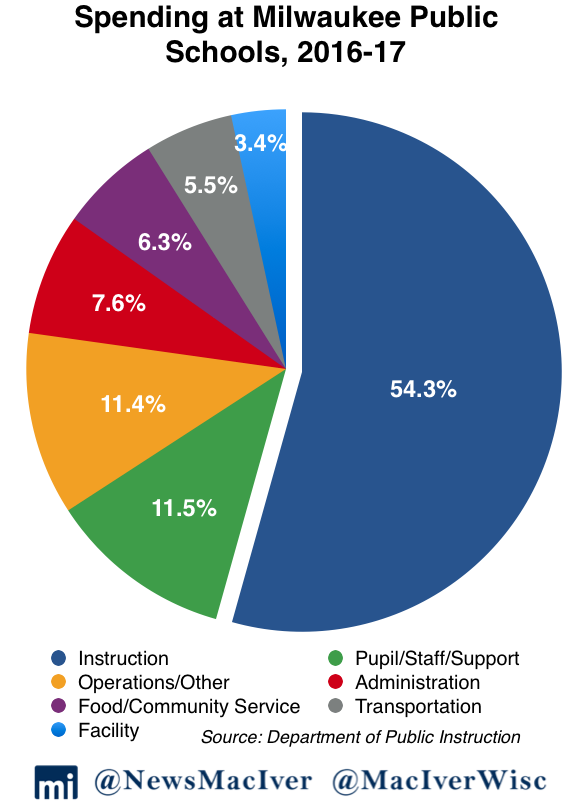 Official district documents show a different picture. According to a 2018-19 MPS fact sheet, 89 percent of the school operations budget is spent on classrooms and schools. The sheet describes that percentage as the portion of the school operations budget spent on school-based staff and supplies. It’s unclear where exactly the figure comes from, but it appears that numerous categories are rolled into the number.

MPS has come under fire in past years for refusing to reform certain priorities such as food services. Former superintendent Mark Thornton was slammed by the district’s board and union  when he called for outside contractors to examine food service inefficiencies. One estimate showed the district could have saved between $8 million and $13 million annually by privatizing school meals, one-third of the entire food service budget at the time. 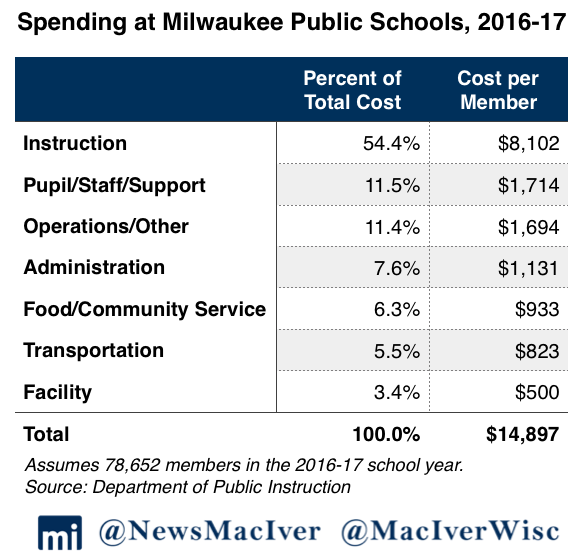 One Milwaukee Journal Sentinel piece quoted Thornton as saying “we owe it to our community, we owe it to our children, to just explore.” Board member Terry Falk rebuffed the idea and encapsulated the employment-first attitude, remarking that students would be told “we saved a bunch of money for your education. Too bad your dad lost his job.”

The district’s newest superintendent, Dr. Keith Posley, showed his willingness to make reforms to the district budget when his first move in his new role was to eliminate nearly 33 central office positions. In all, 16.7 percent of central services funding was cut in Posley’s first budget. However, the document failed to address employee benefits packages or MPS’ expansive, half-empty facilities.

Madison Metropolitan School District (MMSD) spends more than GBAPS, and almost as much as MPS per student. The state’s capital city spends $14,741 per member, with 54.8 percent going toward instruction. At 13.5 percent spent on operations/other, the district is in line with state averages on spending in that category. The biggest variance with the state average is for pupil/staff/support, with 13.2 percent of spending going toward those expenses. At 3.3 percent spent on each transportation and facilities, the district has significantly lower costs than the state averages in those categories. MMSD spends just half of the overall state average for facilities, at $484 per member.

The data release comes as new Gov. Tony Evers has made education spending a priority for his administration. Evers was State Superintendent during the year this data was accumulated.