Sights from the Capitol – We’ve been here all day as the extraordinary session moves in fits and starts. The protesters have mostly gone, and we are still waiting for the Legislature to break an hours-long logjam. But here’s what we saw today.#wiright #wipolitics pic.twitter.com/kzHiZeUZNb

MADISON – After a marathon-and-a-half floor session that extended deep into the new day, Senate Republicans on a party-line vote passed a watered-down version of extraordinary session legislation aimed at protecting the Gov. Scott Walker-era reforms of the past eight years.

All eyes now turn to outgoing Gov. Scott Walker, who has signaled he will sign the bills, which include more legislative oversight of the executive branch but also deliver on limited-government reforms and one final round of tax relief.

The Republican-controlled Assembly continued to debate remaining measures as Wisconsin began the work days but was expected to pass legislation that the GOP majority says will restore balance to the co-equal branches and Democrats breathlessly insist will “subvert the will of the people.”

All eyes — and pressure — now turn to outgoing two-term Gov. Scott Walker, who has signaled he will sign the bills, which include more legislative oversight of the executive branch but also deliver on limited-government reforms and one final round of tax relief.

Asm GOP media avail: @SpeakerVos says he expects the 3 extraordinary session bills by “the end of the day”.

Democrats and their powerful liberal allies in the media lambasted the legislation and the process as a Republican “power grab” and a slap in the face of last month’s election, which saw Democrat Tony Evers beat two-term incumbent Walker and pushed liberal legal activist Josh Kaul past Republican Attorney General Brad Schimel to head the state Department of Justice.

“Nothing that we’re going to be doing here is about helping the people of Wisconsin. It’s about helping politicians … It’s about politics and self-interest,” Assembly Minority Leader Gordon Hintz (D-Oshkosh) declared in the wee hours, as the session slipped past the midnight deadline that Republican leadership set Tuesday afternoon.

“The people have spoken,” Democrats blasted.

Assembly Speaker Robin Vos (R-Burlington) told reporters Tuesday that his constituents and conservatives from around the state have urged him and his Republican colleagues to fight for the tax and regulatory relief the Walker years brought to Wisconsin — to resist, if you will, the liberals who want to wipe out those reforms.

Democrats have been exaggerating and resorting to hyperbole throughout the debate. The vote is about ensuring equal branches of government exist in #Wisconsin especially during this time of divided government.

“What I have heard through the fall is, ‘Don’t give in.’ People have said, ‘Do whatever you have to do so the reforms don’t go away,’” Vos said.

“What I have heard throughout the fall (from my constituents) is, ‘Don’t give in.’ People have said, ‘Do whatever you have to so the reforms don’t go away.” – Speaker Robin Vos said of conservative bills in extraordinary session. #wiright #wipolitics @SpeakerVos

.@SpeakerVos speaks to reporters before extraordinary session. Says measures are the “right things to do.” Says he respects the fact that Tony Evers will be governor, “but he’s not governor today.” pic.twitter.com/ZbwKvINb2u

Republicans say their bills are about securing the Legislature’s equal powers in what are constitutionally supposed to be the co-equal branches of government.

Sen. Howard Marklein (R-Spring Green) issued a response Wednesday evening to what he described as “misleading criticism of those who opposed our work.” He said the Legislature simply asserted its authority as part of a “balanced, three-branch government, built to check and balance among the branches.”

“The content of the legislature’s extraordinary session primarily consisted of legislative efforts to protect citizens from their government,” the senator said.

“We (reined) in government – not Governor-Elect Tony Evers and Attorney General-Elect Josh Kaul. I strongly believe in co-equal branches of government and these changes enable the legislature to perform our duties as a part of this system despite the partisan rhetoric that misled citizens and continues to divide us. So much for civility and cooperation.”

We have allowed far too much authority to move to the executive branch. #WIForward

The goal is to have each of the branches negotiate equally at the table. @DanODonnellShow

Democrats argue the legislation robs Evers and Kaul of rightful executive branch powers before they take their oaths of office. 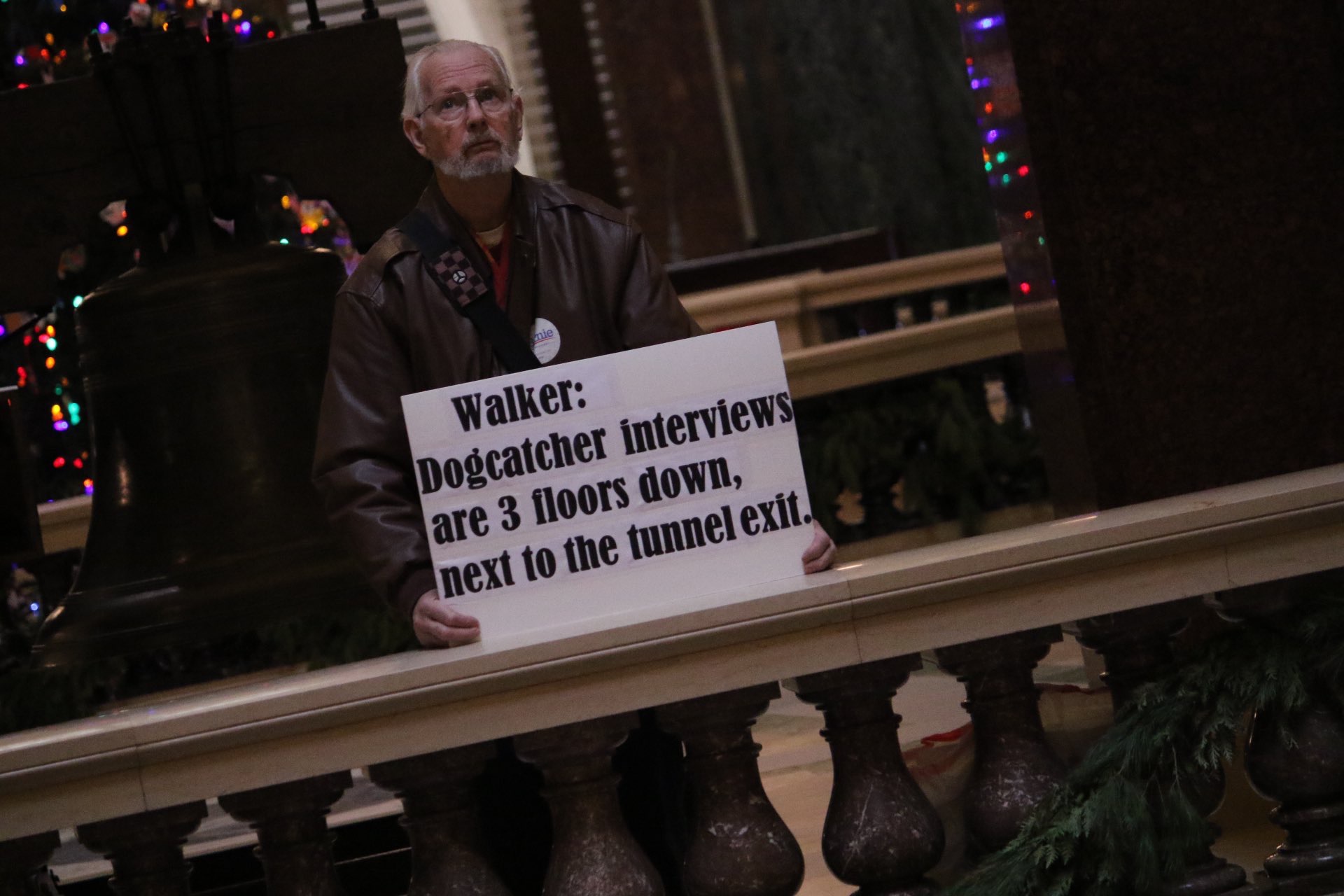 Republicans ultimately scaled back some of the more controversial provisions after long hours of closed door meetings with reluctant caucus members.

Measures that had given the Legislature more oversight and review over executive branch decisions were watered-down.

Lost in the din of the extraordinary session is this fact: The “pay-to-stay” Kimberly-Clark bailout bill was pronounced dead on arrival – nowhere to be found in the omnibus bills. https://t.co/uyEYvXjBgc #wiright #wipolitics.

Republicans relented on provisions that would have taken away Evers’ ability to name the head of the Wisconsin Economic Development Corp., but the incoming governor will have to wait until September to make any changes.

The majority kept a bill that limits early voting to two weeks before the election but offered extended voting hours each of the 14 days. Democrats still hated it and threatened another round of lawsuits. They reminded Republicans that a federal court already had struck down earlier attempts to reign in early voting, but GOP leadership believes the additions in their bill can survive a court challenge.

A measure that would have codified insurance coverage of pre-existing conditions failed as conservatives in the Senate bolted on a messy bill that came out of the Assembly earlier this year.

Legislation that would have moved the 2020 presidential primary from the first Tuesday in April to the second Tuesday in March died on the vine. Changing the date would decouple the partisan presidential election from the nonpartisan spring election. The shift would clearly benefit Republicans’ efforts to retain conservative state Supreme Court Justice Daniel Kelly, a Walker appointee, by moving a significant voter draw from the April ballot.

Several measures would provide more legislative oversight of executive branch agencies and the attorney general. It boils down to a matter of trust, and Republicans clearly don’t trust Kaul and Evers to keep liberal activism out of the executive branch. Kaul has pledged to remove Wisconsin from a list of state plaintiff’s in a lawsuit challenging the constitutionality of Obamacare. Amendments to one provision would give the Legislature a voice in AG lawsuits.

The Republican-controlled Legislature did deliver on some substantial limited government reforms. Key provisions in the “Agency Transparency Reform Act” authored by state Rep. Andre Jacque (R-De Pere) and Sen. Dave Craig (R-Big Bend) won passage. One of the bills aims to close the wink-and-nod “sue and settle” loophole that has given unelected bureaucrats increased and unchecked regulatory authority.

“This legislation will provide more transparency, accountability and oversight of state agencies and give the public greater access and opportunity for input, ensuring that state agencies are not overstepping their regulatory authority and imposing new regulations that have not been through the rulemaking process,” Jacque said in a statement.

Again, Democrats, who couldn't stand George H.W. Bush when he was president, are invoking his memory and praising him as a true statesman as they vilify Gov. Scott Walker and the Republican-led Legislature. #wiright #wipolitics

Republicans also want to make sure that welfare reforms, including stricter work requirements and drug testing initiatives, aren’t wiped out by a Democrat who has declared how much he loathes the reforms. The updated versions of the legislation hold onto those protections.

Fewer protesters showed up at the Capitol Tuesday, but they were vocal and, at times, disruptive. 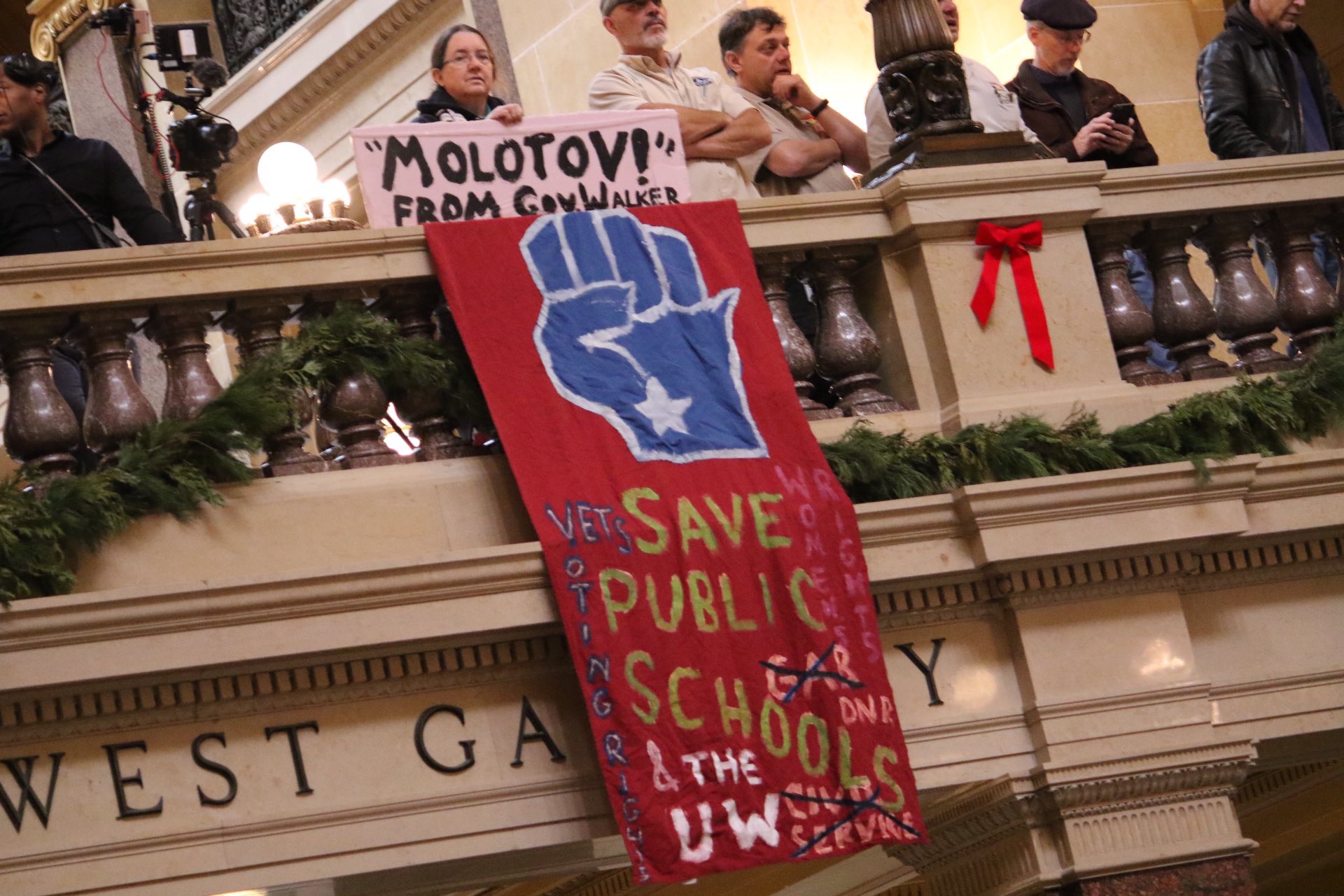 The Senate president ordered the gallery cleared just as floor session began following outbursts and disruptions. And Walker hecklers booed and jeered the governor as he led the annual tree-lighting ceremony in the rotunda. 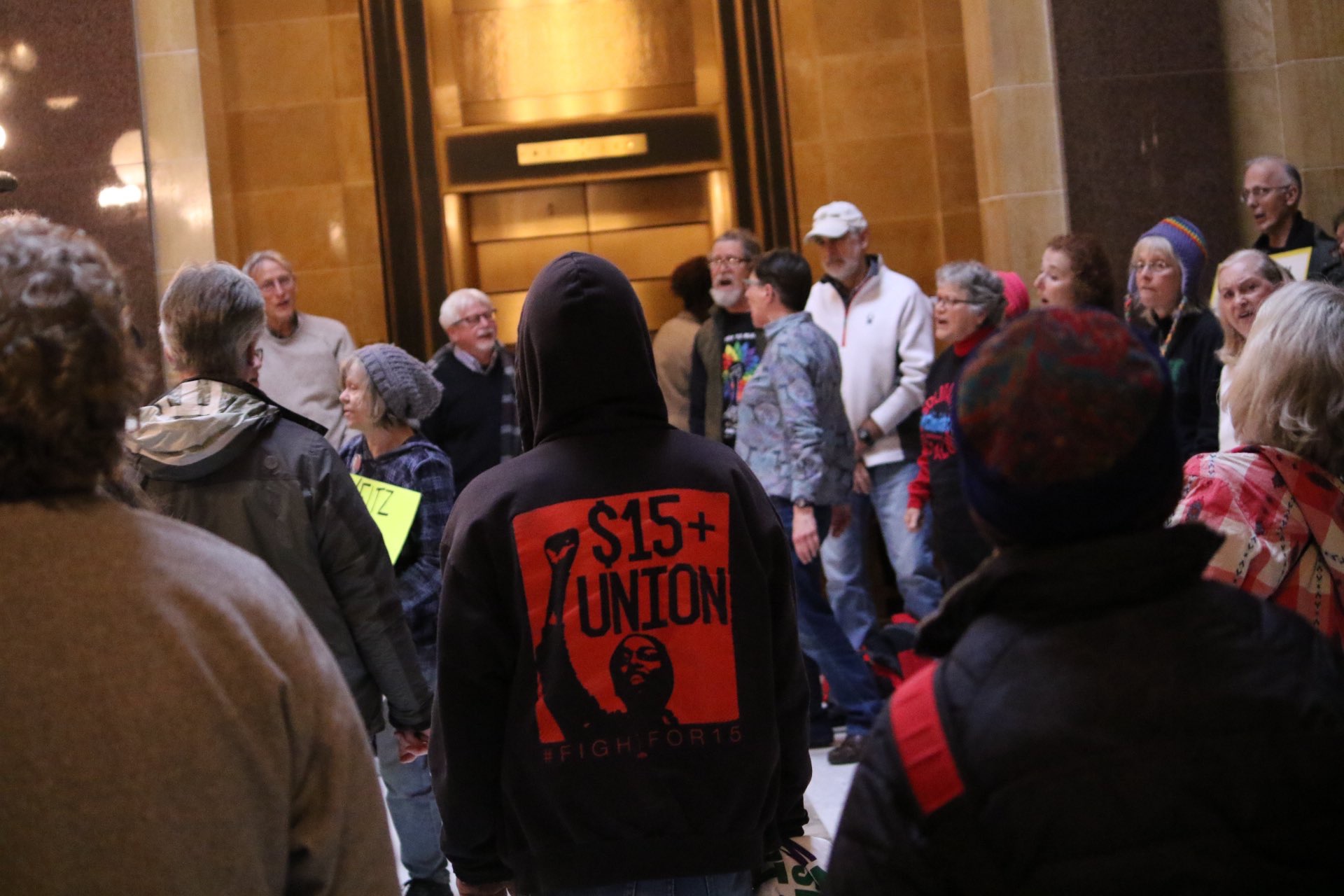 The Senate had to stand informal this evening as protesters in the gallery disrupted our proceedings. Here’s the view from my seat. #wiright #wipolitics pic.twitter.com/aVp15MeCdP

Protesters outside the Senate chanting “kill the bills” after singing Solidarity Forever. Numbers nothing like 2011, but message is basically the same. pic.twitter.com/31IHOYhMV5

Capitol Police are clearing the Senate gallery after protesters got out of hand and loud. pic.twitter.com/xh7mQbefBE

As the owner of the Wisconsin State Capitol Christmas tree, which has grown in her front yard for 35 years, addresses the crowd about the magic of Christmas, a protestor yells “F*ck you, Vos!” pic.twitter.com/kv8p7E1gfq