What impact will early voting have on next week's election? The number of absentee ballots cast in Wisconsin as of early this week was markedly down from the presidential election two years ago. #wiright #wipolitics Click To Tweet

MADISON – With just days before Election Day, early voting and registration is coming to a close, and campaigns are beginning their final push to cajole voters to the polls.

But tens of thousands of voters won’t be casting ballots next Tuesday. They’ve already voted.

Absentee voting has surged in recent weeks, but vote counts are nowhere near where they were in 2016’s presidential contest, according to the latest data from the Wisconsin Elections Commission. MacIver News Service has pulled and summarized the numbers coming from key counties in this election.

In liberal stronghold Dane County, at the beginning of October, 1,752 voters had submitted their absentee ballots. As of Monday, the total climbed to 45,486 ballots, according to official numbers from the Wisconsin Elections Commission, which collects absentee ballot numbers on a county-level. According to Mayor Paul Soglin, the City of Madison accounts for 32,332 of those absentee ballots, which he says is a new record.

That might be the case for mid-term elections. However, at this point in the November 2016 election cycle (October 31, 2016), Dane County had collected 69,024 absentee ballots.

In Eau Claire County, absentee ballots have increased from 288 to 5,078 between the beginning of October and Monday.

In Brown County, one of the more politically purple regions of the state, 14,616 people had submitted absentee ballots as of Monday, about 10,000 fewer than the same date in 2016. 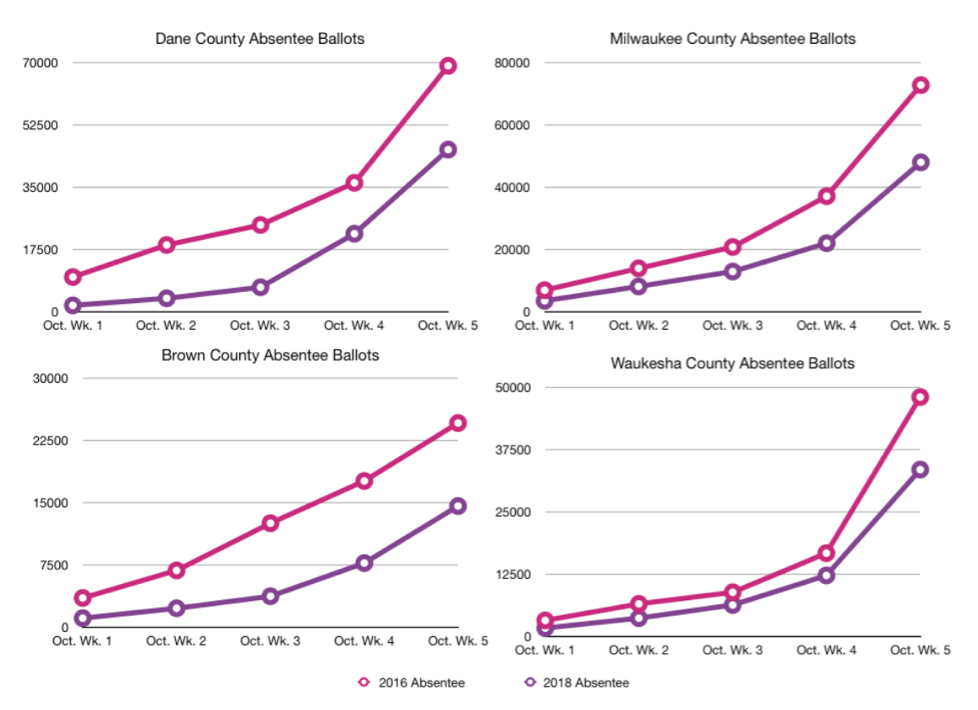