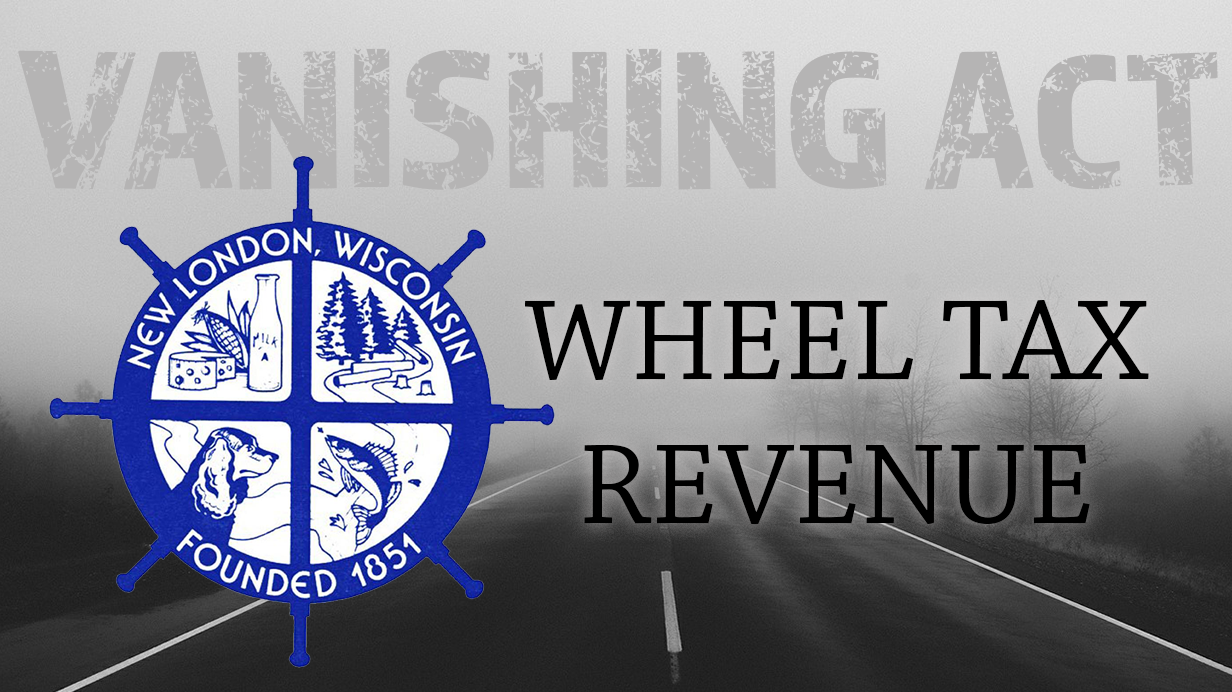 A MacIver Perspective by Bill Osmulski

The City of New London has a balanced budget this year, which includes $184,000 from its new wheel tax, but spends only $18,000 on road work. So the big question is: what did New London spend its wheel tax money on?

The city’s $20 wheel tax took effect on Jan. 1, and is expected to bring in $184,000 this year. Rather than going into a segregated account, it’s all being dumped into the general fund, according to the 2018 city budget.

Add everything together and you end up with a combined $162,500 cut to public works in the operating and capital budgets, while the city collects an extra $184,000 from a wheel tax. Where did that money go?

Most of the general fund is spent on general government operations. This year every department got a boost in funding … That is, every department except for public works, which was cut by $35,500 (going from $928,389 last year to $892,822 this year).

Public works plans to spend $18,000 on street repairs, compared to $14,000 last year. That appears to be the only road spending in New London’s budget this year.

Add everything together and you end up with a combined $162,500 cut to public works in the operating and capital budgets, while the city collects an extra $184,000 from a wheel tax. Where did that money go?

According to the city’s finance director, Judy Radke, the city plans to use $111,784 from the wheel tax on transportation projects and the rest will go into the fund balance. However, that cannot be found anywhere in the 2018 budget, which the city council approved in November 2017.

Radke says the wheel tax will pay for a $15,000 “smear patch” on House Road, and on two railroad crossing improvement projects with an initial estimate of $118,562. The railroad crossing project was first proposed at a committee meeting in June, seven months after the 2018 budget was passed.

The city council approved the initial expense of $15,000 to hire an architect at its next meeting. However, they said, “it could be a long time” before any actual construction begins.

One council member asked why the railroad isn’t paying for the project. No one had an answer at the council meeting and the motion passed. Later, MacIver News called the Office of the Commissioner of Railroads, and learned that railroads are indeed responsible for maintaining and improving their crossings – especially when they own the property, as Canadian National Railway does in New London.

In any case, it’s clear that the city will not incur the cost of the projects until the next budget.

The general fund budget is balanced, the capital budget was cut by $34,000, and only $8,000 went into the capital fund balance. There is nowhere for the wheel tax to hide. It clearly got spent on something other than roads.

At the top of the list of suspects, Parks and Recreation got a $54,791 boost in general funding and a $72,000 increase in capital spending.

The bottom line is, it’s hard to pinpoint exactly where the $184,000 from the wheel tax got spent because it was dumped into the general fund.

Under Act 10, local governments are allowed to require employees to pay up to 12 percent of their health care costs. In New London, any employee who works at least 36 hours a week only has to pay 4 percent of the cost of their premiums.

The city also has a generous sick leave payout policy. Workers can bank up to 120 sick days and put that toward health insurance premiums upon retirement.

The bottom line is, it’s hard to pinpoint exactly where the $184,000 from the wheel tax got spent because it was dumped into the general fund. The 2018 budget did not include a $184,000 increase in road projects, nor did it include a $184,000 increase in the fund balance to spend on road projects later on. So what did New London spend its wheel tax money on?