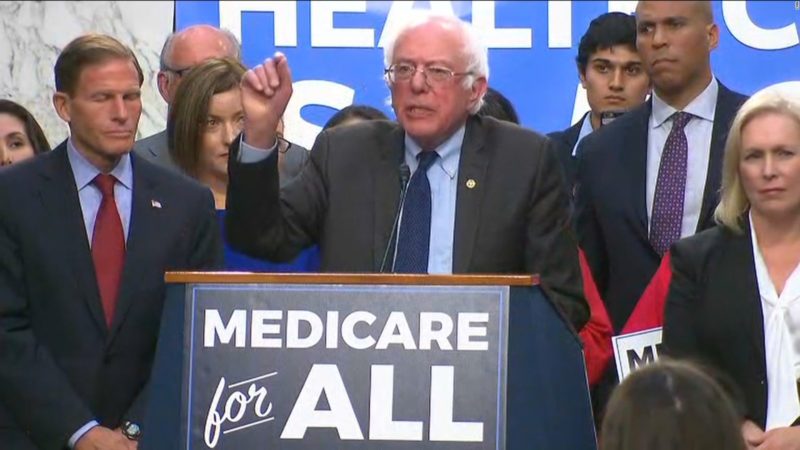 One need only look to Britain’s inability to handle last year’s flu epidemic to see what health care would be like under a single-payer system in the United States. #wiright #wipolitics Click To Tweet

Pocan, Baldwin and other left-wing pushers of U.S. Sen. Bernie Sanders’ proposed government takeover of America’s health care system are quite fond of the slogans. They’re just not keen on dealing with the reality of Medicare for All – what it would mean to health care delivery in America and to an already bloated federal budget.

One need only look to Britain’s inability to handle last year’s flu epidemic to see what health care would be like under a single-payer system in the United States.

The piece is as much a warning to young doctors flirting with support of government-run health care than a wake-up to political progressives. As Kaiser Health News recently reported the American Medical Association’s medical student caucus in June pushed for the organization to drop its long-held opposition to single-payer health care.

“We believe health care is a human right, maybe more so than past generations,” said Dr. Brad Zehr, a 29-year-old pathology resident at the Ohio State University, who was part of the debate. “There’s a generational shift happening, where we see universal health care as a requirement.”

Idealistic? Yes. Grounded in reality? Not so much.

First, as Moffit and Pham note, there is the untenable cost of the Sanders plan. Multiple estimates, including from the left-leaning Urban Institute peg the Medicare for All federal government price tag at $32 trillion over 10 years.

Sanders and his plan’s advocates claim the Vermont U.S. senator’s bill would save more than $2 trillion over a decade. But that’s a mischaracterization, according to the Associated Press, of a major study on the plan’s cost by Charles Blahous, a former Medicare trustee, now at the Mercatus Center.

“As the Associated Press’ fact check notes, the $2.1 trillion ‘savings’ estimate rests on the implausible assumption—studiously ignored by Sanders and others—that hospitals and staffing levels would remain the same—despite an estimated 40 percent reduction in compensation for medical services,” Moffit and Pham wrote in their column for Heritage.

In other words, defenders of universal health care insist health care professionals are making too much money. To provide Medicare for All, doctors must sacrifice some of their income, the redistributionists assert.

Wisconsin liberals have a similar plan known as BadgerCare for All. The same fiscal issues come up under this Medicaid-based plan. Like Medicare for All, the Wisconsin plan is mired in the reality of stunningly low reimbursement rates.

Medicaid regularly stiffs health care providers by paying less than the full cost of services provided. Nationally, Medicaid pays only 52 cents for every dollar that private insurers pay. So if we push more of our citizens into BadgerCare, fewer doctors will accept BadgerCare patients because of the lousy reimbursement rate and access to health care will only get worse.

“…(Y)ou are really talking about introducing into the United States the kinds of things that cause all kinds of ugly headlines for the British health service, which are long waits, scandalous denials of health care, and various kinds of horror stories, which the British press openly publishes,” Moffit told MacIver News Service last week on the Vicki McKenna Show on NewsTalk 1130 WISN.

Experts such as Blahous question how providers could stay in business under such “dramatic payment adjustments.”

Now, consider that America faces a looming physician shortage, as many as 120,000 doctors by 2030, according to the Association of American Medical Colleges. Trimming pay by 40 percent would only add to that gap.

But these costs could pale in comparison to the massive bureaucracy that would dog the Medicare for All model. And that’s where Britain’s single payer health system comes in.

Already dealing with delayed service and deteriorating quality, the National Health Service was paralyzed last flu season in the face of a particularly virulent strain of influenza in Britain.

“British hospital wards are often overcrowded, but the crush of flu patients exacerbated the system’s persistent and underlying problems—inadequate staffing and insufficient resources,” Moffit and Pham wrote. “The British Medical Association’s quarterly survey of physicians found that 82 percent of respondents felt their workplaces were understaffed.”

Such an outbreak has a stifling impact on the Health Service’s centralized system of service delivery.

The lumbering, government-run health care system was forced to cancel some 50,000 surgeries that were not deemed urgent, according to the Telegraph.

Moffit and Pham argue that “routine” operations, as determined by the Health Service, are not always so routine. Some involve necessary procedures that, if not conducted, could result in dangerous mortality rates.

While the Medicare for All slogans may sound nice, Moffit warns the implications of implementing a single-payer system in a nation of 325 million inhabitants is a recipe for disaster.

“When you get down to the dollars and cents of it and to how these programs work, it means health care you can have when the government says you can have it,” he said. “You get what they give you when they decide to give you it and under what circumstances they plan to give it to you.”