This is the fourth story in a periodic series on taxpayer-funded perks enjoyed by government employees.

MADISON – It’s been a very good year for public school administrators in Wisconsin.

Taxpayers shelled out nearly $437 million for administrator salaries in the 2017-2018 academic year, according to new data from the Department of Public Instruction. That’s an increase of $5 million, despite paying 20 fewer people than the previous year.

On average, public school administrators make over three times the statewide per capita income of $29,253, and far more than median income of $54,610 for an entire household.

Bear in mind we aren’t just talking about principals and superintendents. Wisconsin has added 675 positions since 2000 for a total of 4,538 “administrators,” including such titles as “library media supervisor” and “director of multicultural education and equity.” That equates to a 17 percent increase in the number of public school administrators – yet, at the same time, student enrollment fell considerably.

A staggering 41 percent of these administrators enjoy a salary over $100,000.

A comparison with the rest of the Wisconsin workforce underscores just how bloated administrator earnings are. On average, public school administrators make more than three times the statewide per capita income of $29,253, and far more than the median income of $54,610 for an entire household. 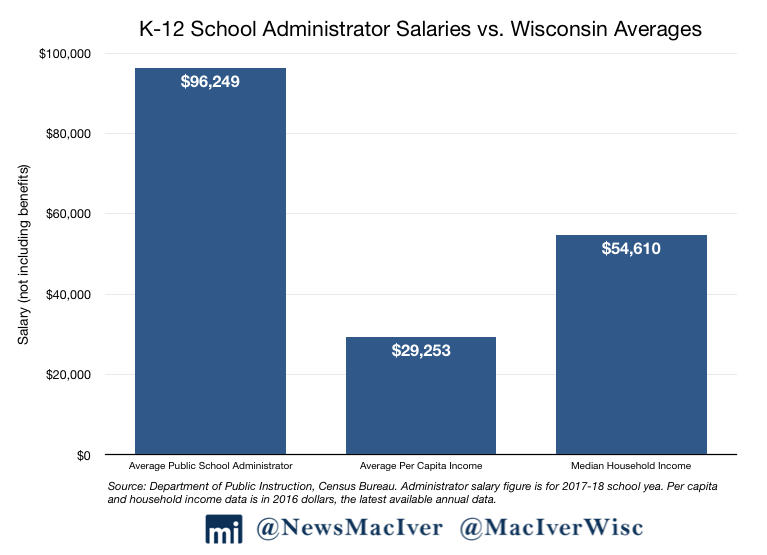 Wisconsin’s highest-paid administrator is Milwaukee School District superintendent Darienne Driver – or at least it used to be. After Driver’s departure, the title now goes to Madison Metropolitan superintendent Jennifer Cheatham at $241,235 – plus $53,489 in benefits – more than seven times the Madison per capita income of $33,215 per year.

Driver used to make $255,000 per year with an additional $28,041 in benefits – twelve times Milwaukee’s per capita income of $20,630 per year – but left to become CEO of United Way in Michigan. Although Driver’s contract ran through July, successor Keith Posley was hired at $210,000 per year to begin work in May, forcing taxpayers to compensate two superintendents for the work of one.

As the MacIver Institute has previously reported, Milwaukee schools have suffered budget problems for years due to massive administrative bloat and astonishingly high salaries and benefits packages for its central office employees. Certain public school administrators are even grossly overpaid relative to one another.

The second highest-paid business manager, however, ranks just 62nd in the state, and average earnings in the field total just $140,677 – a salary that pales in comparison to Dellutri’s, but is nevertheless needlessly overinflated.

With administrators being paid three times as much as the average Wisconsin worker, it’s really no wonder there never seems to be enough money for education.