The reinsurance plan is expected to cost $200 million a year, with about $34 million a year coming from state coffers. But state officials project it will lower premiums for those on Obamacare by 3.5 percent, reducing premiums by 11 percent compared to possible rate hikes without the program.

Under Walker’s plan, the state will cover up to 80 percent of private insurance companies’ claims that fall between $50,000 and $250,000, which is intended to mitigate insurers’ losses and encourage them to lower their rates.

Walker asked federal permission to implement the reinsurance plan after last year’s 44 percent increase for people on Obamacare, just the latest double digit increase in premiums in the wake of the disastrous health care law that just last year cost 75,000 Wisconsinites their health insurance plans as insurers continued to flee the market.

“People in the individual market saw their premiums go up by 44 percent on average last year, and some saw much larger increases – that’s unsustainable and unacceptable…Thankfully, the federal government is giving us the flexibility to implement a Wisconsin-based solution to help stabilize premiums,” Walker said in statement.

In the absence of action by Congress to repeal Obamacare and implement market-based reforms, Insurance Commissioner Ted Nickel said it’s up to the states to protect their citizens from the rising costs of health care. In addition to the reinsurance program, Wisconsin is working on other cost-saving measures, Nickel said.

“If Congress continues to avoid action, states will need to continue to take the lead to protect our citizens from the negative consequences of the ACA. We hope we can find other approaches to lower costs and more competition in the Wisconsin health insurance market,” Nickel said.

The request for the so-called Section 1332 Wavier, which allows states to implement their own innovative approaches to reduce the cost of health care, was submitted to the federal government in April.

MADISON, Wis. – Gov. Scott Walker’s request to implement a reinsurance program to stave off another round of massive premium increases under Obamacare is now in the hands of the federal government, Walker announced on Wednesday.

According to OCI data, insurers have lost a staggering $400 million in Wisconsin’s individual market in just the last three years.

State officials expect the plan, submitted late Wednesday to the U.S. Department of Health and Human Services, to be approved quickly.

“We feel very, very positive about our ability to get an approval, and to get it on a timely basis so that we can have a positive impact for people, for small business owners, for family farmers and others on the individual market,” Walker told reporters on a conference call Wednesday.

“We believe if we’re given approval under the federal government and under the waiver, we believe that premiums will be reduced by 10.6 percent from the level (of increase) that otherwise would’ve occurred,” Walker said.

That reduction means administration officials expect individual market premiums will drop by 5 percent in 2019 compared with real-dollar rates in 2018 as a result of the reinsurance.

The $200 million reinsurance plan will help insurance companies cover most of the cost of claims that fall within a certain range and is intended to prevent another massive price spike, like the 36 percent increase Wisconsinites on the individual market were projected to endure headed into 2018.

But the 36 percent projection jumped to 44 percent now that the data on who actually enrolled in 2018 is available. 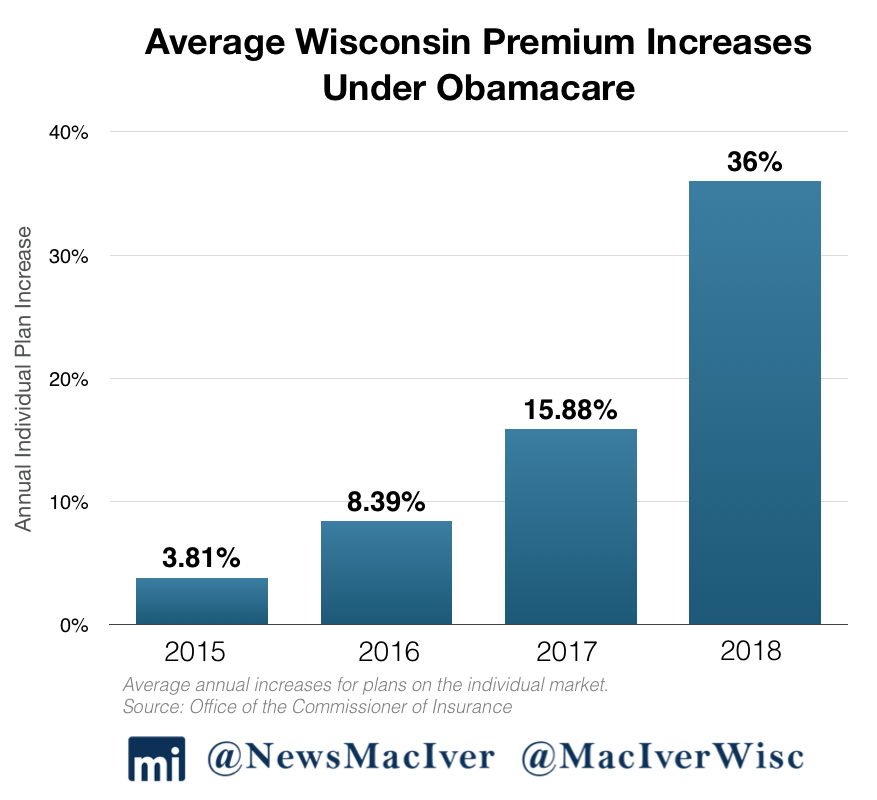 Under Walker’s plan, the state will cover up to 80 percent of private insurance companies’ claims that fall between $50,000 and $250,000. Walker administration officials say this would create an incentive for insurers to hold costs to below that upper limit.

But the plan will still cost taxpayers a lot of money – the full cost is projected to be $200 million per year, with $34 million coming from state coffers and $166 million coming from the feds. The $34 million state portion, down from an initial projection of $50 million, will be paid for by savings in the state’s behemoth Medical Assistance program, officials say.

The waiver seeks permission to run the reinsurance program for five years.

Insurance companies are also fleeing the market in droves, forcing 75,000 Wisconsinites off their plans in 2018 alone. According to OCI data, insurers have lost a staggering $400 million in Wisconsin’s individual market in just the last three years.

As a result, some of the largest insurers in the state and nation – Aetna, Humana, UnitedHealth, Anthem, and Molina – stopped offering plans on the Obamacare exchange in Wisconsin in the past year. Wisconsin’s Obamacare market lost an average of 1.39 insurers per county from 2016-2017 according to a MacIver Institute analysis, and in a growing swath of the state only one insurer is still in the market.

The decline has been particularly harsh in and around Brown County in northeastern Wisconsin, where a robust individual market has deteriorated to the point where only one insurer – taxpayer-subsidized Common Ground Health Cooperative – remains. Left with no competition, Common Ground raised its premiums for 2018 by an astounding 63 percent.

Walker’s reinsurance plan aims to prevent the complete collapse of those markets, thrown into turmoil by Obamacare, like individual markets across the country. According to the Centers for Medicare and Medicaid Services, 1,565 counties nationwide have just one insurance carrier, more than 51 percent of all counties.

The Walker administration is optimistic that the reinsurance program, if approved, will not just drive down premiums but stabilize the dwindling market, which has been beset by an imbalanced risk pool as younger, healthier, and less expensive people opt to go without the costly coverage.

“More plans will get in…By helping offset that risk pool with the reinsurance, that not only drives premiums down, it makes it more plausible for insurers, particularly those that were here before, to re-enter the marketplace,” Walker said.

The waiver request was made under a little-known provision of the Obamacare law called a “Section 1332” State Innovation Waiver. The process allows states to make changes to their insurance market provided the waiver:

At least 24 states were considering implementing State Innovation Waivers as of December 2017, according to the state Office of the Commissioner of Insurance. Alaska, Minnesota and Oregon all received federal permission for similar programs.

While the Walker administration is taking steps to keep sickly individual markets alive for the 200,000 Wisconsinites on the individual insurance market in the short term, Attorney General Brad Schimel in February sued the Trump administration in an effort to dismantle the source of the instability, the Obamacare law.

The 20-state lawsuit, led by Schimel and Texas AG Ken Paxton, alleges that Obamacare is unconstitutional now that the law’s individual tax penalty has been repealed as part of the Tax Cuts And Jobs Act, which Trump signed into law in December.

The U.S. Supreme Court upheld Obamacare in 2012 on the constitutionally shaky notion that the law’s individual mandate and associated fine for going uninsured was actually a tax, which Congress has the power to lay and collect. But the Republican tax overhaul repealed the Obamacare penalty, a deeply unpopular fine paid by individuals who in many cases can’t afford insurance coverage.

The lawsuit – and the reinsurance plan – are the result of congressional Republicans’ failure to pass an Obamacare repeal and replace plan. While one version of that, the American Health Care Act, passed the House last year, it failed in the Senate.

“We got close, we got the governors behind a variation of that (AHCA) plan. We thought we were close to getting it done, it didn’t happen. Washington has failed to act, Wisconsin needs to lead,” Walker said.