This is the second story in a periodic series on taxpayer funded perks enjoyed by government employees.

MADISON  – While tens of thousands of Wisconsinites wonder how they’re going to cover their escalating health insurance costs, scores of former government workers in the Wisconsin Retirement System may not have to worry about paying for their health care bills for the rest of their lives.

The highest sick leave balance in 2017 topped $907,000 for a 69-year-old public employee with 27 years creditable service at a top annual salary of $290,000. That’s equal to more than three years of the retiree’s peak salary.

Thanks to Wisconsin’s generous sick leave conversion system, some retirees have banked hundreds of thousands of dollars they can use to pay for post-retirement health insurance premiums in the Wisconsin Group Health Insurance Program.

MacIver News Service obtained and analyzed the data, which includes the 25 highest sick leave account balances for employees that retired over a five-year period between 2013 and 2017.

The highest sick leave balance in 2017 topped $907,000 for a 69-year-old public employee with 27 years creditable service at a top annual salary of $290,000. That’s equal to more than three years of the retiree’s peak salary.

Ranking second on the list was a 63-year-old retiree with nearly $841,000 worth of unused sick leave, equal to more than three years of salary. The retiree had 29 years of creditable service, earning a peak salary of $270,000.

State employees retiring in 2016 converted more than $168 million worth of unused sick leave, according to ETF. 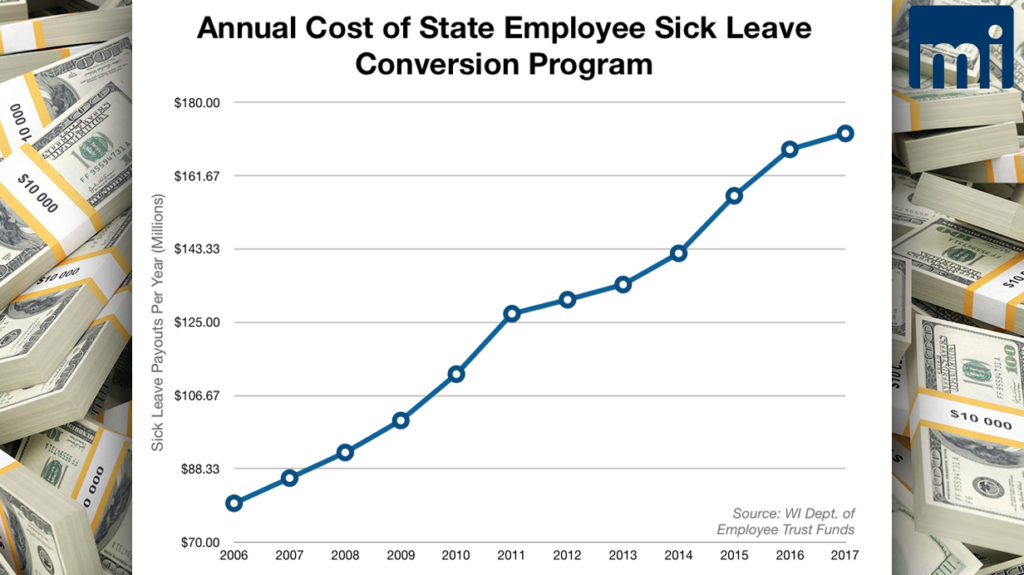 As previously reported by MacIver News, Wisconsin allows state workers to convert their unused sick leave into health insurance payments at retirement. State workers earn 16.25 sick days a year. The typical public employee in the system uses just over eight days based on 2016 averages. The unused days carry over year-to-year and accumulate throughout the employee’s career.

Sick leave is calculated using the employee’s highest rate of pay. Similar to higher pension benefits, employees with higher value sick leave account balances tend to have a higher rate of pay, work longer and are older than the average retiree.

Every state worker is enrolled in ASLCC (Accumulated Sick Leave Conversion Credit Program). That program takes the number of unused sick hours an employee has and multiplies it by their highest basic hourly pay rate.

Upon a retiree’s death, surviving spouses and dependents are eligible to use credits from both programs. Sick leave credit conversion accounts have no cash value and do not accrue interest over time.

Employees who have worked for the state for over 15 years are also enrolled in SHICC (Supplemental Health Insurance Conversion Credit Program). This program takes the employee’s ASLCC amount and matches a certain portion of it.

Upon a retiree’s death, surviving spouses and dependents are eligible to use credits from both programs. Sick leave credit conversion accounts have no cash value and do not accrue interest over time.

But they sure do add up – to the tune of $3 billion in obligations, as MacIver News Service reported last year.

The state Department of Employee Trust Funds, the agency which oversees public employee post-retirement benefits, insists the sick leave conversion programs are pre-funded based on a percentage of payroll recommended by the ETF Board’s consulting actuary and through the issuance of pension obligation bonds by the state of Wisconsin.

“As a result of the bonding, the state has paid off the majority of the unfunded liabilities of the programs,” according to ETF.

But the massive dollar figures continue to raise questions.

“I think the obvious question is, are we giving too much sick leave?” Adamczyk said.

Lawmakers certainly thought so in 2011, when sick leave conversion payments soared 13.5 percent, in the wake of a glut of public employee retirements during the Act 10 debates. One Republican lawmaker described the unused sick leave figures as jaw-dropping. The Speaker of the Assembly at the time promised reform.

But nothing has ever come of it.

A Senate bill that would have prevented state lawmakers from accruing unused sick leave passed out of committee, but went no further.

Rep. David Steffen (R-Green Bay) co-sponsored the bill. He told MacIver News at the time that it’s difficult to reform a program when lawmakers themselves benefit so greatly from it.

“The reality is when I tried to end this little known health care golden parachute, it was not well received by my colleagues,” Steffen said.

“The reality is when I tried to end this little known health care golden parachute, it was not well received by my colleagues. I put this legislation out in my first term because I felt this benefit lacked transparency to the public and encouraged long-term tenure of elected officials,” Steffen said.

The total cost of the benefit has steadily increased since 2011.

One retiree posted more than $1.17 million in sick leave balances. The 66-year-old former public employee retired in 2016 with 41 years of creditable service. At a peak salary of $330,000, the retiree earned the equivalent of nearly four years’ pay in unused sick leave. ETF does not provide identifying information of those in the retirement system.

“Should we have an overall cap in the dollar amount, or look at not giving three weeks and two days off per year (in sick leave)?” the treasurer said.