MPS faces a financial crisis of its own making, in large part because it has catered to the demands of the teachers' union, existing in a fiscal fantasy land and leaving the tab for future taxpayers. #wiright #wipolitics Click To Tweet

Days after audaciously asserting Milwaukee Public Schools needs to double its $1.1 billion budget, the Milwaukee Teachers’ Education Association is flirting with the ’S word,’ if the district doesn’t back off on budget cut talk.

Driver’s proposed changes could result in $17 million in savings. The board accepted only one – the elimination of the disability benefit, at a savings of $2 million.

All the while, union officials demand that even contemplating a strike in the pursuit of happiness for MPS teachers is all about the kids.

“Our students cannot sustain one more loss … your signatures are your commitment to take bold action,” MTEA Vice President Amy Mizialko said last week in a video in which she asks union members to sign a pledge guaranteeing “their commitment to act this May.”

“We are asking every educator in every Milwaukee public school to search your conscience and consider how far each of you is willing to go to guarantee a just budget for students and educators,” Mizialko said. While she doesn’t use the word “strike” or “work stoppage,” education experts say it’s pretty clear that’s what the union leader is talking about.

If Mizialko and her fellow union officers really searched their consciences, they would admit that all of their blustering and sky-is-falling rhetoric isn’t about MPS students as much as it’s about the money. As in “Show me the money” – more money for teachers who on average earn well above the Milwaukee County median household income and generally command better benefits than workers in the private sector. As in, more money for more teachers, despite MPS’ plummeting enrollment figures over the past decade. As in, more money for union members who would pump more cash into the coffers of a labor organization that will continue to push for the fleecing of taxpayers while it subsidizes labor-friendly, left-leaning politicians.

“The $2 million that it will cost to do that is nothing,” Mizialko declared. “This is a billion-dollar budget. But MPS students need $2 billion.”

Left out of all of the dire budget cut conversations is the fact that Milwaukee is a huge declining aid school district. MPS’ enrollment has sharply declined – dropping by approximately 10,000 students in 10 years. Wisconsin’s school aid formula is based on property values and enrollment. Declining enrollment school districts, rightfully, receive less money because their student rolls are shrinking and, consequently, they require fewer educators.

Educrats lament the loss of the funding that comes with each student’s departure. They fail to mention that when a student leaves MPS, the district no longer incurs the cost of educating that child.

MPS’ instructional staff declined by about 800 positions over the period, but the school district’s bureaucrats have flourished. The number of  administrators and managers alone has doubled since 2008, as have the number of guidance counselors.

The district faces a financial crisis of its own making, in large part because its school board has catered to the unrealistic demands of the teachers union, existing in a fiscal fantasy land and leaving the tab for future taxpayers.

MPS’ budget plan calls for eliminating more than 140 positions and trimming $11 million in spending districtwide as the state’s largest school system wrestles with a $38.7 million budget shortfall (about 3 percent of the $1.17 billion budget) in the 2018-19 school year.

That number balloons to nearly $200 million just a few years down the road.

“We will be bankrupt in about a year and a half,” board member Terry Falk said last month.

In other words, the loan on Fantasy Land is coming due.

Over the past decade, district spending on long-term debt interest has spiked by 34 percent. Spending on community services has ballooned by more than 50 percent. Outstanding pension debt alone totals nearly $190 million as of 2017. Classroom spending directly competes with the benefits accrued by the growing army of school district retirees who collect hefty checks every month.

The proposed $11 million cut in spending is a drop in the ocean compared to the $545 million unrestricted deficit in Other Post-Employment Benefits (OPEB) that MPS is anchored to, according to the 2017 Comprehensive Annual Financial Report.

Whenever reality has intruded, when a rare district official has offered a fiscally responsible idea, the MPS school board and the teachers’ union have quickly killed the proposal.

Outgoing Superintendent Darienne Driver recently committed the transgression of recommending changes to the district’s generous benefits package. She proposed increasing employee copays, boosting educator contributions, creating a spousal surcharge, and ending a long-term disability benefit. The changes could result in $17 million in savings. The board accepted only one – the elimination of the disability benefit, at a savings of $2 million. 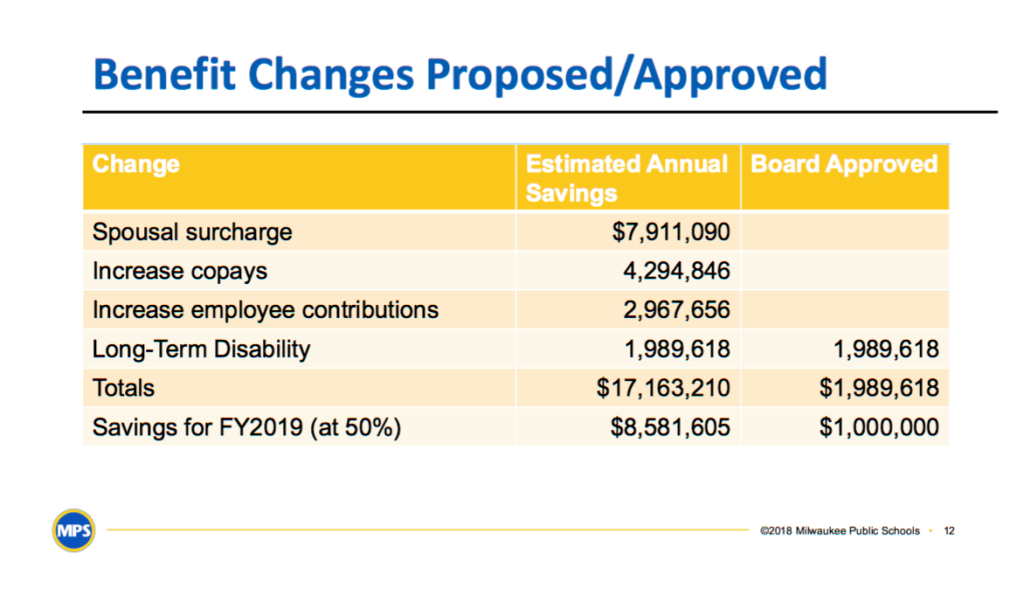 MPS’ former Superintendent Mark Thornton saw Fantasy Land first-hand when he called for outside contractors to examine food service inefficiencies. One estimate showed the district could save up to $13 million a year – one-third of the entire food service budget at the time – by privatizing school meals. Both board and union rejected the plan, preferring to provide for jobs – and big-ticket government benefits – rather than kids and classrooms. Thornton lost the debate and was universally slammed for even suggesting the idea.

The teachers union wants to see full benefits for “full-time” substitute teachers working 32 hours per week, an idea that is foreign to most private-sector contracted employees.

MPS’ fiscal problems aren’t merely a Milwaukee taxpayer concern. State revenue makes up more than half of MPS’ funding stream, and is more than twice the amount of local revenue sources.

Mizialko claims MTEA is preparing for attacks on teachers.

In MPS Fantasy Land, taxpayers better prepare for another attack on fiscal reality – and on their wallets.