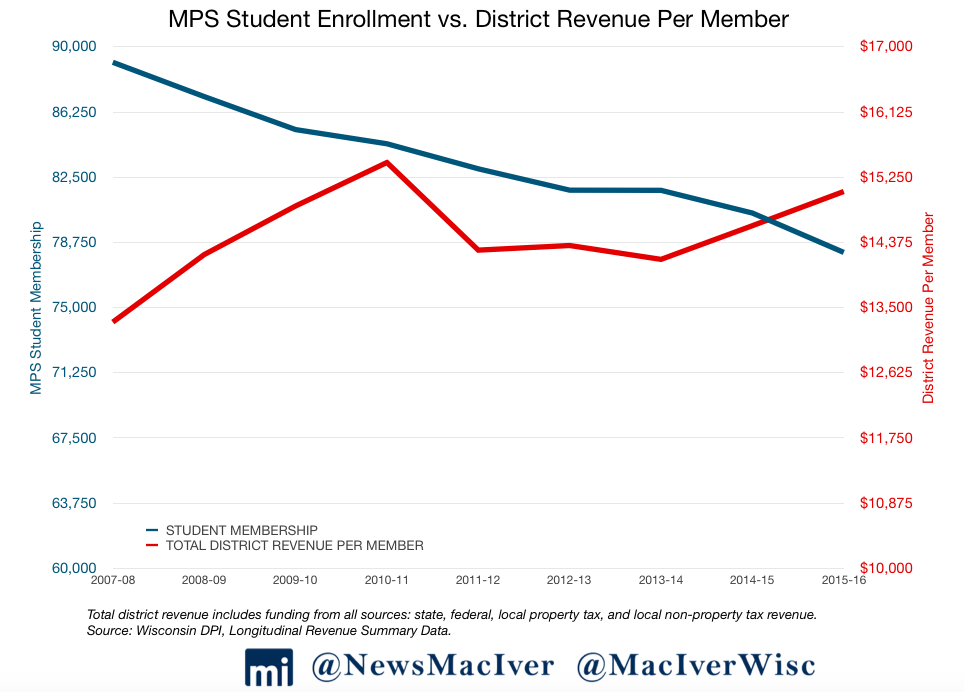 As an elected official, Bonds’ comment was out of line – but Mizialko’s remarks are the real controversy, and deserve much more attention and critique. As the union leader testified against Bonds’ idea to swap a proposed $2 million in cuts to student transportation for employee raises, she showed her hand. 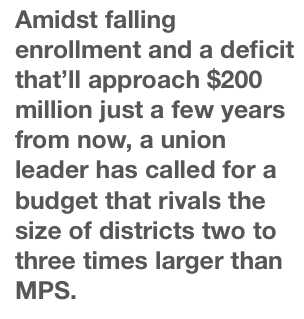 “The $2 million that it will cost to do that is nothing,” Mizialko declares. “This is a billion dollar budget. But MPS students need $2 billion.”

Now we know the labor leaders’ starting bargaining position. To the union, nothing short of $2 billion in taxpayer funding for MPS will suffice.

To put the imagined $2 billion for MPS in context, Dallas Independent School District has a budget totaling just over $1.9 billion. Their enrollment approaches 158,000 students, double MPS’ 75,539.

Hillsborough City Public Schools, in Florida, spends approximately $1.9 billion on its 197,000 pupils, a student body 2.6 times the size of MPS. Broward County Public Schools, also in Florida, has a $2.3 billion budget – and student enrollment more than three times the size of MPS. It’s worth mentioning that recent test results showed Florida public students demonstrating stronger improvement than anywhere else in the country, including Wisconsin, where results stagnated.

Mizialko laments falling taxpayer support for the district, a myth in itself. She highlights the coming November election and says that the public will get to cast votes for “a governor who will proudly fund Wisconsin public schools.”

Never mind that Democrat Gov. Jim Doyle’s last budget was built on the back of one-time federal stimulus money. After Gov. Scott Walker’s first budget, every bill since then has increased K-12 funding, culminating in a record-breaking, largest-in-a-decade $636 million increase in school funding just last year.

Educrats lament the loss of the funding that comes with each student’s enrollment. They fail to mention that when a student leaves MPS, the district no longer incurs the cost of educating that child.

It’s no wonder the district faces growing deficits. With a stubborn refusal to do anything about major cost drivers for the district – namely, pension and healthcare spending – MPS is staring down a $38 million deficit in the next year. That number balloons to nearly $200 million just a few years down the road. As board member Terry Falk said at a recent budget hearing – “We will be bankrupt in about a year and a half.”

In that context, Mizialko’s $2 billion wish is even more ridiculous.

It is long past time for MPS to take a serious look at its finances. In the last 10 years, district spending on long-term debt interest has spiked by 34 percent. Spending on community services has ballooned by more than 50 percent. Outstanding pension debt alone totals nearly $190 million as of 2017. Classroom spending directly competes with the benefits accrued by the growing army of school district retirees who collect hefty checks every month.

The truth is, no amount of state aid will ever be enough to prop up such cost drivers and an establishment that is more focused on employment than students. 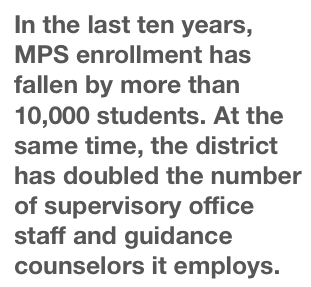 Just look at the case of MPS’ former Superintendent Mark Thornton, who saw this first-hand when he made a call for outside contractors to examine food service inefficiencies. One estimate showed the district could save up to $13 million a year – one-third of the entire food service budget at the time – by privatizing school meals. Both board and union rejected the plan, preferring to provide for jobs – and big-ticket government benefits – rather than kids and classrooms. Thornton lost the debate and was universally slammed for even suggesting the idea.

The school board has the tools – including Act 10 – to get costs under control. The only question is whether it has the political will to make these tough calls.

Bureaucrats have also accumulated like barnacles on the bottoms of boats, adding considerable costs. The number of officials, administrators, and managers alone has doubled since 2008, as have the number of guidance counselors.

These mid-level managers and paper-pushers are crowding out more important hires, including teachers. While the district continued to hire support staff, it chose to employ 27 percent fewer elementary and secondary classroom teachers compared to 2008.

As more Milwaukee families move outside the district – which had some of the worst scores in the nation for large cities on recent national test results – MPS’ problems will only get worse. Even $2 billion, as absurd as the number is, will never be enough to cover the coming wave of debt payments. Only with serious spending and benefit reform does the district have a chance at getting its head above water.