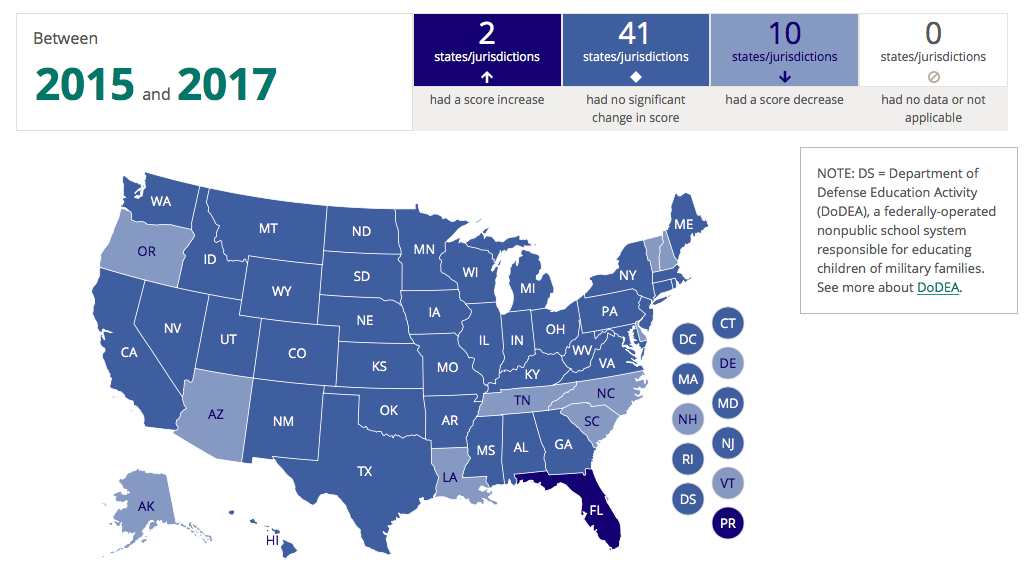 Performance in math and reading has stayed flat for most American students, according to a new national data release from the Department of Education. Students in Wisconsin scored above the national average in both subjects, with fourth-grade reading scores falling by one point and scores for both tested grades staying flat in math.

The results come from a statistically representative group of nearly 585,000 fourth- and eighth-graders across the country who took the National Assessment of Educational Progress (NAEP), also known as the Nation’s Report Card, in 2017. 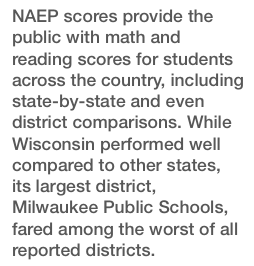 Nationwide, the average reading score ticked up by one point for eighth-graders. No significant score change occurred for fourth-graders in reading, or for math in either grade.

A state-level analysis shows more stagnation in scores. The average scores for most states did not change compared to 2015 in either grade or subject. Wisconsin fourth-graders fared worse on reading than they did in 2015, while eighth-graders fared the same in reading, and math scores for both grades stayed flat. 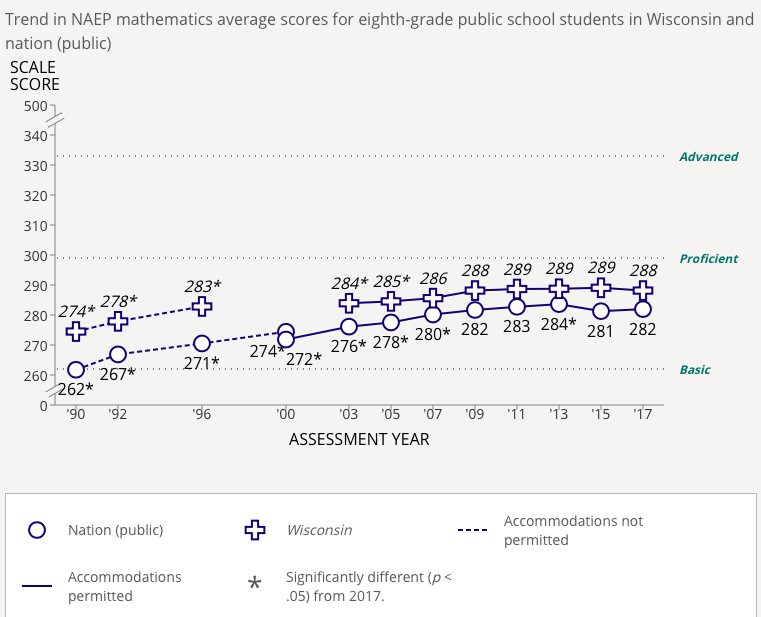 The data highlights a number of public school districts across the country, including Milwaukee Public Schools. MPS students in both grades and in both subjects fared worse than the state and national average.

For both tested grades, MPS students received among the worst scores in the country in both reading and math, with only Detroit performing worse in every category.

MPS students did not take the exam in 2015, so the most recent data for comparison comes from 2013. Fourth-grade MPS students fared worse in math than they did in 2013. Scores were not significantly different for eighth-graders in either subject or for fourth-graders in reading, compared to 2013.

At the national level, while overall scores stayed mostly flat, gaps grew slightly between the highest- and lowest- performing groups. High-performing eighth-graders – those in the 75th and 90th percentiles – improved their scores compared to the last test in both subjects. 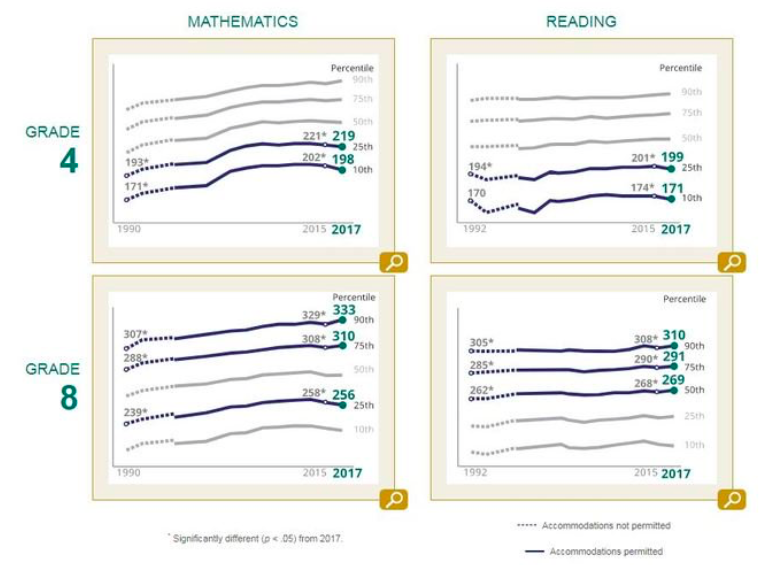 Low-achieving fourth-graders in the 10th and 25th percentiles saw their scores fall compared to 2015 in both math and reading.

In reading, eighth-graders in public schools and in suburban schools increased their scores. Other groups with score decreases in mathematics included fourth-graders in urban schools, students with disabilities, and students eligible for the free lunch program. Those groups did not see a significant score change in reading.

Achievement gaps between ethnic and racial groups persist. The largest reported gap between any student group was for eighth grade math, where white students scored an average 32 points higher than black students. The fourth grade math gap between white and black students is smaller, at 25 points, pointing to growing disparities.

Those gaps have existed as long as the test has been administered, with the 1990 exam showing a 32-point gap in fourth grade math between white and black students. Nearly 30 years later, a 25-point gap between the same group of students exists today.

Scores in both math and reading have improved since the tests were first administered in 1990 and 1992, respectively, but have flattened out in recent years. Students in the fourth grade testing for math skills have improved the most since 1990, with a 27-point increase in the average score. In reading, the same group has seen a 5-point increase since 1992.

State Superintendent Tony Evers released a statement highlighting achievement gaps in the results. “Wisconsin’s NAEP results, and those of the past decade plus, show how desperate the need is for us to work together to close opportunity gaps for our kids,” Evers said. “As our population continues to diversify, we cannot afford to leave large numbers of our students behind their peers and expect the Wisconsin economy to continue without disruption.”