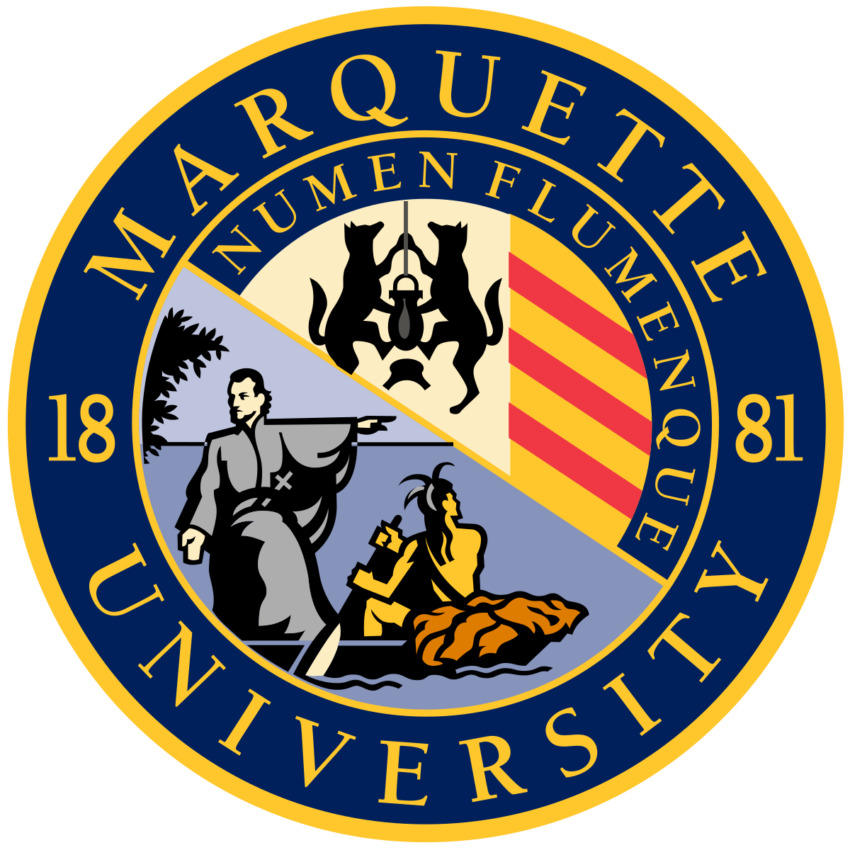 MADISON, Wis. – Just when you think things couldn’t get any weirder at Marquette University, the social justice warriors have taken weird to another level.

This time, the left’s trigger image is a depiction of the Catholic school’s namesake, Fr. Jacques Marquette, being guided by a 17th century Native American.

But to some of Marquette’s “best and brightest,” Father Marquette was all about white privilege more than 300 years before fringe liberals forced the accusation onto the American psyche.

As Marquette freshman Zachary Petrizzo writes in Campus Reform, faculty members at a recent white guilt and shame forum pronounced the school’s seal a “microaggression.” Why? Because it depicts white French explorer Marquette pointing out into the pre-colonized American Midwestern distance while ostensibly getting directions from one of the many natives who assisted him on his faith-based mission.

“Do you know what the Marquette seal looks like? Is that a microaggression?” Marquette University counselor Nicholas Jenkins asked a gathering of students and others at the university’s Center for Intercultural Engagement. The audience agreed that the seal is indeed a microagression, described by the safe space crowd as “verbal, nonverbal, and environmental slights, snubs, or insults, whether intentional or unintentional, which communicate hostile, derogatory, or negative messages to target persons based solely on their marginalized group membership.”

To some of Marquette’s “best and brightest,” Father Marquette was all about white privilege more than 300 years before fringe liberals forced the accusation onto the American psyche. #wiright #wipolitics Click To Tweet

Of course, the Miami tribe guide didn’t know he was part of a “marginalized group” when he was helping the Jesuit missionary find his way. Father Marquette, of course, as the Catholic university named after him will tell you, loved the Great Lakes tribes he lived among for nine years while bringing them the Good News of the Gospel.

“The Miami guide represents the many Miami guides who accompanies him on his explorations of the western Great Lakes and the Mississippi River system,” Marquette University notes on its website.

But to some of Marquette’s “best and brightest,” Father Marquette was all about white privilege more than 300 years before fringe liberals forced the accusation onto the American psyche.

“It is a fact that a white man took advantage of an economic disparity to have a Native American as his guide, so portraying that is value-neutral, arguably,” Theology Graduate Assistant Gary Klump insisted, according to Petrizzo’s piece. “The history happened. Portraying it can be positive or negative, depending on the values attached.”

There’s also another bit of history the lefty professors and faculty members failed to “attach.”

Jesuits take vows of chastity, obedience, and poverty. Just another example of “poor people” being exploited by another poor person?

Fr. Jacques Marquette was a member of the Society of Jesus, or the Jesuits, a religious order of the the Roman Catholic Church, founded by St. Ignatius of Loyola. Jesuits take vows of chastity, obedience, and poverty. Just another example of “poor people” being exploited by another poor person?

“Father Marquette was actually quite poor himself, and was merely looking to the Native Americans as a guide. So the historical context shows us that his claims are actually false,” Petrizzo told MacIver News Service in an interview this week on the Dan O’Donnell Show, on NewsTalk 1130 WISN.

Marquette is a Jesuit institution of higher education.

“Administrators here have come up with the slogan, ‘We are Marquette.’ Well, we are not Marquette if we are calling what we believe in a ‘microaggression’ and if we are not staying true to who we are as a Catholic and Jesuit institution,” Petrizzo said.

But administrators arguably have countenanced all kinds of left-wing theories while marginalizing, even silencing conservatives on what once was a conservative campus.

So have many of its students, under the intellectual guidance of educators such as Simon Howard, a Marquette psychology professor.

“I often look at multiple ways in which we socialize in a system of white supremacy, which is the United States … This is a system that perpetuates white supremacy and that is ideological,” Howard told the forum audience. “Where does this stem from? I look at the church” and its primary image of a “white Jesus.”

Petrizzo, chairman of the Marquette College Republicans, said forum organizers weren’t interested in challenges to their racist points of view.

“If you were a white male you really couldn’t talk (at the forum),” he said. When he entered the room, Petrizzo said he was told by a Marquette counselor that white men asking a man of color in a grocery store if he needs help is but one of many examples of microaggressions.

“I guess I was seen as a microaggression,” Petrizzo said.

This isn’t the first time the university’s 110-year-old seal has come under fire.

In 2015, a group calling itself the Ad Hoc Coalition of and for Students of Color” clamored for more mandated diversity courses as four of their ranks blocked a busy campus intersection in protest. The students demanded the “biased” seal be cropped or altered, according to the College Fix.

Marquette conservative students and those who resist the notions of microaggressions in school seals and white supremacy pervading modern culture, probably aren’t thrilled to know they are helping to fund the university’s intercultural center – the site of the microaggression forum – through their tuition and activity fees.

University officials did not respond to MacIver News Service’s request for comment.