Jarrar’s statements trashing the late Barbara Bush are protected. Not McAdams’, at least according to @MarquetteU’s interpretation. #wiright #wipolitics Click To Tweet

A MacIver Perspective By M.D. Kittle

Let’s do the radical math.

Marquette Political Science Professor John McAdams published a factual blog outing a grad student teacher who forbade her philosophy student from discussing his opposition to same-sex marriage because doing so would be homophobic and offensive.

The professors made their comments on private communication accounts, not affiliated with their universities. 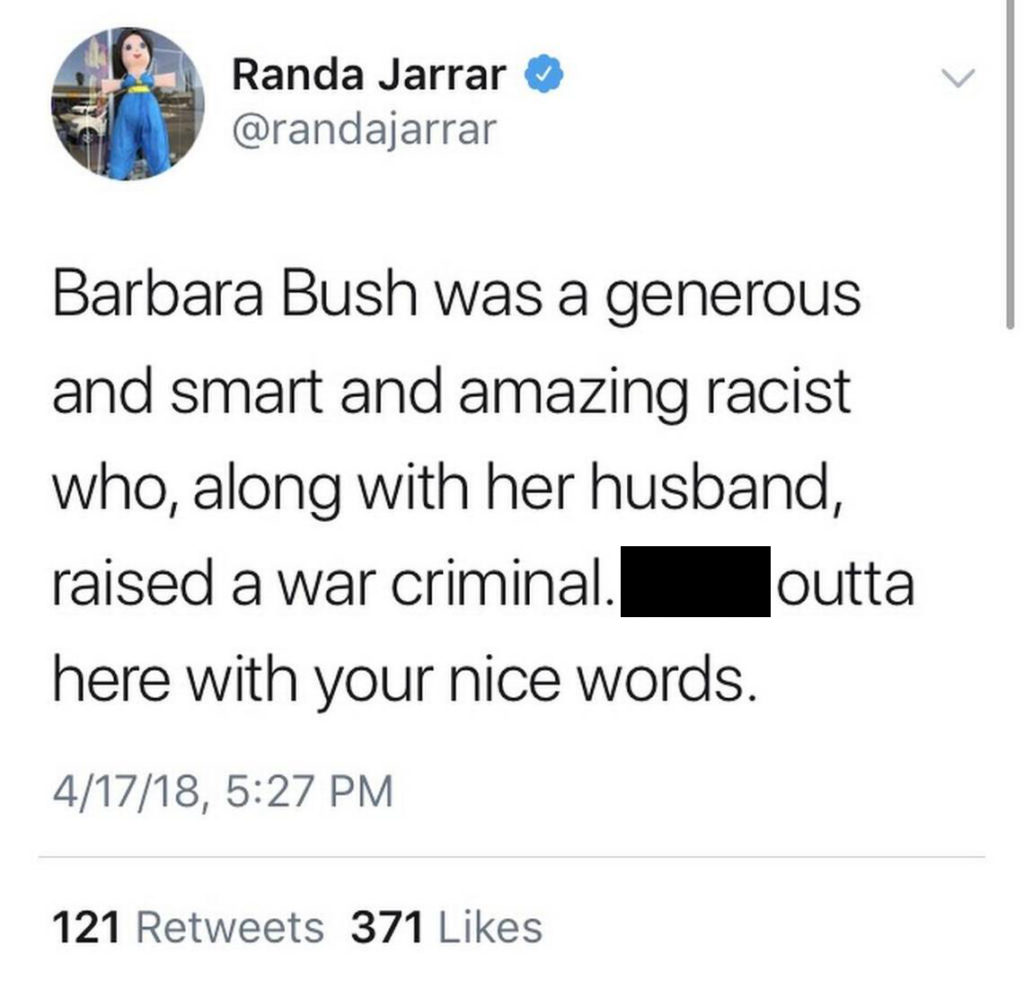 But Jarrar, who falsely tweeted that the former First Lady known as America’s Grandma “raised a war criminal,” will keep her job and will not face any discipline from her university.

McAdams is forced to fight for his job and his academic freedom before the Wisconsin Supreme Court more than three years after Marquette kicked him out of class.

McAdams, like Jarrar, has argued that his contract with his school grants him the right to speak freely, including criticizing university administration and staff.

Jarrar, however, could confidently thumb her nose at the thousands of Twitter critics, insisting that she “will never be fired.”

Fresno State President Joseph I. Castro confirmed as much this week when he issued a five-paragraph statement.

Yes, Jarrar’s conduct was “insensitive, inappropriate and an embarrassment to the university,” Castro wrote. But after reviewing the facts and consulting with lawyers, the university concluded that the creative writing professor did not violate any state university policies. She was, Castro said, “acting in a private capacity and speaking about a public matter on her personal Twitter account.”

“Her comments, although disgraceful, are protected free speech under the First Amendment of the U.S. Constitution,” the president stated.

“Her comments, although disgraceful, are protected free speech under the First Amendment of the U.S. Constitution,” said Fresno State President Joseph I. Castro.

Jarrar’s statements are protected. Not McAdams’, at least according to Marquette’s interpretation.

“Barbara Bush was a generous and smart and amazing racist who, along with her husband, raised a war criminal,” according to the Fresno Bee.

“I’m happy the witch is dead,” Jarrar wrote in another tweet. “Can’t wait for the rest of the family to fall to their demise the way 1.5 million iraqis have. byyyeeeeeee.”

She chided the thousands of Twitter subscribers appalled by her comments, critics the professor also described as “racists.”

“What I love about being an American professor is my right to free speech, and what I love about Fresno State is that I always feel protected and at home here,” Jarrar tweeted, after insisting that she was being targeted because she is “an Arab American Muslim American woman with some clout.”

Here’s where we find two Americas.

McAdams, a long-time outspoken critic of Marquette administration, was suspended in late 2014 after writing his post on his blog, Marquette Warrior. Administrators insist that the nationally renowned political science professor violated the university’s code of conduct when he identified the graduate student teacher in his blog post. In spring 2016, Marquette President Michael Lovell demanded the conservative professor, a long-time critic of Marquette’s increasingly liberal policies, apologize for his actions. Then, and only then, could McAdams return to the classroom. McAdams declined, and filed a wrongful termination lawsuit.

Yes, professor McAdams sees the irony in the situation. No, he doesn’t believe Jarrar should be fired for using “intemperate or inflammatory” speech.

“One of the problems in trying to define intemperate language or hate speech in a punishment way is that standards like that are never applied in a viewpoint-neutral way,” said Professor John McAdams.

“She’s an idiot. My academic freedom includes the right to call her an idiot,” McAdams said. “But one of the problems in trying to define intemperate language or hate speech in a punishment way is that standards like that are never applied in a viewpoint-neutral way.”

“In left-wing academia it would always be conservatives accused. Leftists would pretty much always get away with saying what they want.”

McAdams said Jarrar’s tweets do say something about the state of higher education in America today.

“This woman has been considered perfectly respected in academia. That doesn’t mean she doesn’t have First Amendment rights, it just speaks badly for academia to have too large a number of people like her in it.”

But what does it all say about the double standards applied to speech on colleges campuses today? McAdams is Exhibit A in the case of silenced conservative speech now before the Wisconsin Supreme Court.