[Madison, Wis…] More Wisconsin high schoolers are graduating in four years and the number of students who drop out is staying steady, according to an extensive new dataset released Thursday by the Department of Public Instruction (DPI). The data also show that the average ACT composite score and participation rate remains generally unchanged compared to last year, but more high school students are opting out of attending college.

The data, mostly focusing on the class of 2017, offers a mix bag of results. The release shows that 88.6 percent of students graduated in four years, up from 88.2 percent in 2016. The percent of students who dropped out of high school – 1.5 percent – was the same percentage as last year.

Overall public school enrollment for the 2017-18 school year was down, falling by 0.41 percent, or 3,743 students. The percent of students enrolled in postsecondary institutions plummeted to 55 percent, a drastic drop from 71 percent in 2013.

ACT results for the class of 2017 were positive, though not groundbreaking. The scores, which are the average of all ACT exams taken by 2017 graduates, stayed exactly the same for English, math, writing, and the overall composite.

The participation rate also stayed steady at 92.1 percent, the same as last year, which was the first year that the state paid for all students to take the exam. Last year, the average score fell by 1.8 points, but nearly 46 percent more students took the exam compared to the year prior. This time around, both participation rates and overall scores stayed mostly steady.

The average score in reading fell from 20.5 to 20.4, but the percent of college-ready exam takers grew to 40.5 percent from 39.6 percent. Students stayed steady in science, earning an average 20.7 of 36 points with 35.9 percent marked college-ready, both the exact same results as last year.

Another good sign for students came in the data on Advanced Placement (AP) exams. High school students can take AP exams to earn college credit, with many schools – including the University of Wisconsin-Madison – providing general education credits for a score of three or higher. 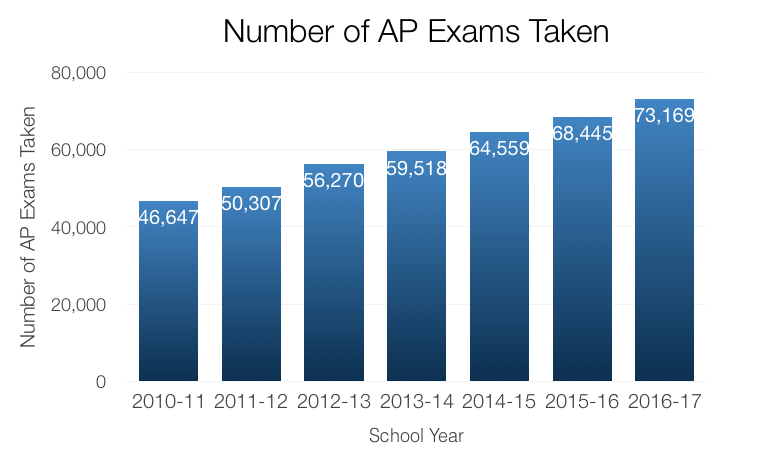 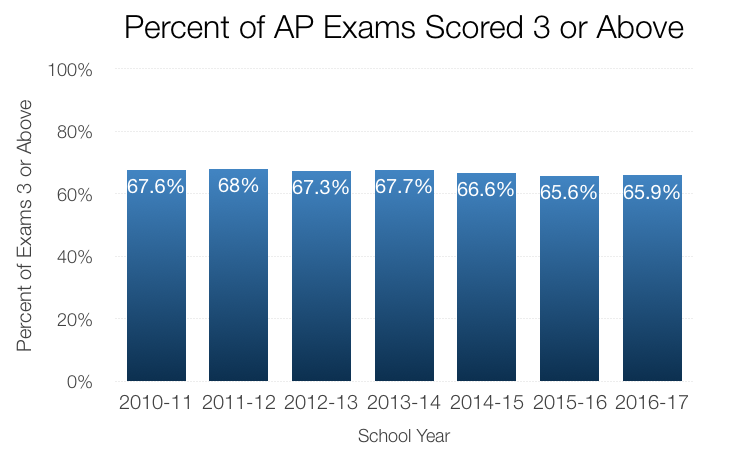 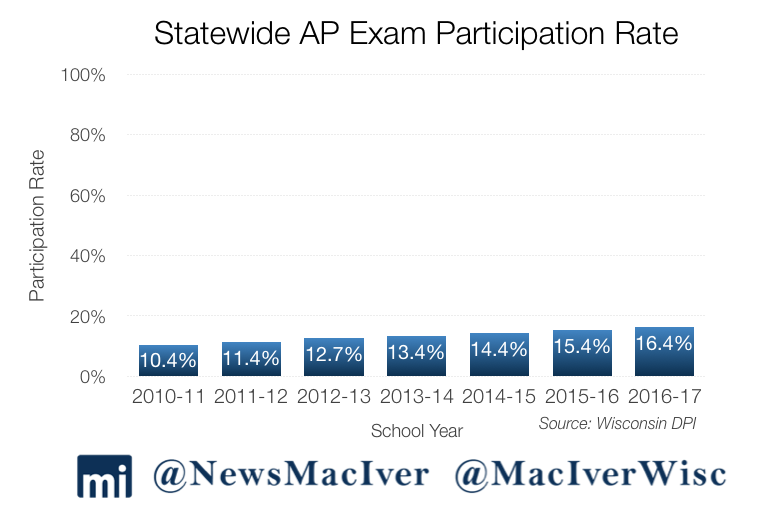 The participation rate among high school students taking an AP exam grew by a full percentage point in the 2016-17 school year, from 15.4 percent to 16.4 percent. The percent of exams graded three or higher also increased from 65.6 percent to 65.9 percent. Compared to last year, 7 percent more AP exams were taken in the state of Wisconsin. More students are considering these exams as a legitimate way to get ahead on general education credits and save money on future college expenses. While 16.4 percent is still a low participation rate, the year-over-year trend is promising. 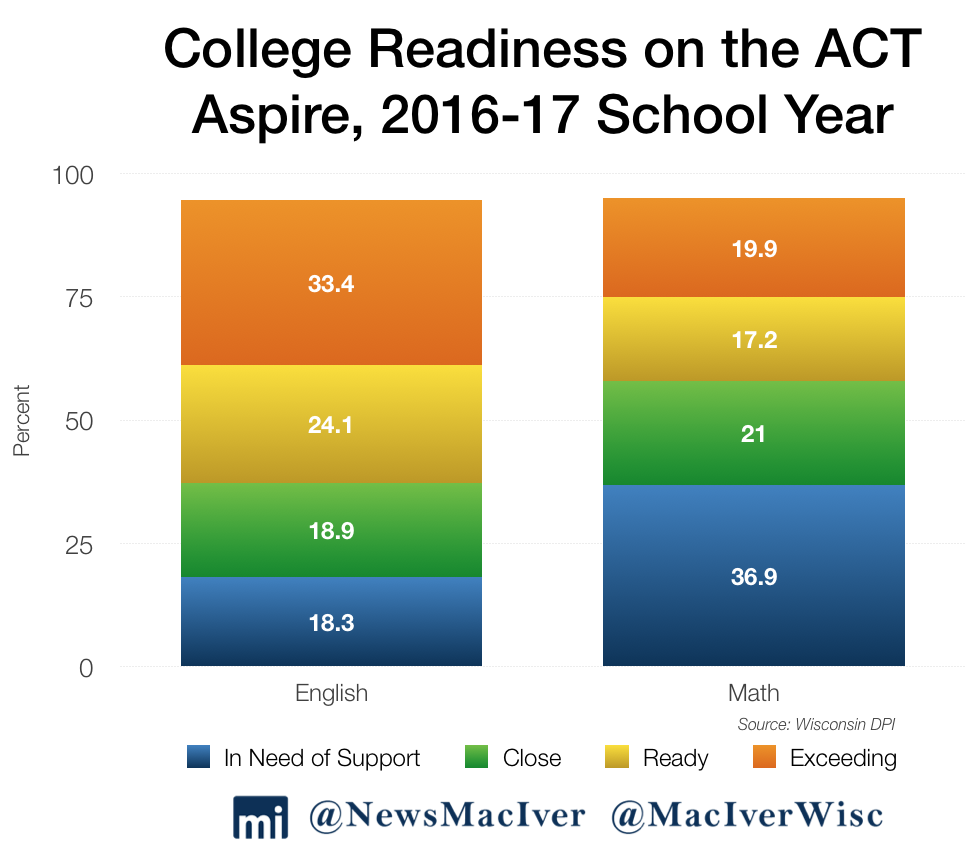 While ACT and AP score results showed positive news for students, ACT Aspire data showed some retreats. Fewer students demonstrated proficiency on the ACT Aspire in almost every subject compared to last year. That exam is taken by 9th and 10th graders as they prepare for the full ACT exam that they submit with college applications.

Writing was the only ACT Aspire subject area in which more students were proficient over last year, albeit by a small amount – 51.4 percent of students were ready or exceeding, up from 51 percent in 2015-16.

Last year’s data release on graduation rates was marred by questionable, asterisk-laden numbers. The department released 2016 graduation rates months after they were expected, and 21 school districts submitted “data errata” letters showing that their submitted data was wrong. For that reason, DPI warned the public to consider the data carefully as it reworked the numbers for the November report card release. DPI had originally published a four-year graduation rate of 88.4 percent, but that number later fell to 88.2 percent as corrections were made. Zero school districts submitted data errata letters for this release.

Another strong trend emerged in the data, showing how students are making different choices than those just a year or two before them. In the 2016-17 school year, 54.9 percent of graduates were enrolled in a postsecondary institution, down from 61.6 in 2015-16. That continues a steady drop in the percent of postsecondary enrollments among high school graduates – just five years ago, in the 2012-13 school year, 70.9 percent of students were enrolled in a postsecondary institution upon graduating high school. The 15-point swing is perhaps the single largest change in any measured indicator of Wisconsin students.

Declining public school enrollment continued a longstanding trend as more students choose K-12 schools outside the traditional public school system. In the 2017-18 school year, 860,138 students are enrolled, down from 863,881 the year before, a 0.41 percent decrease. 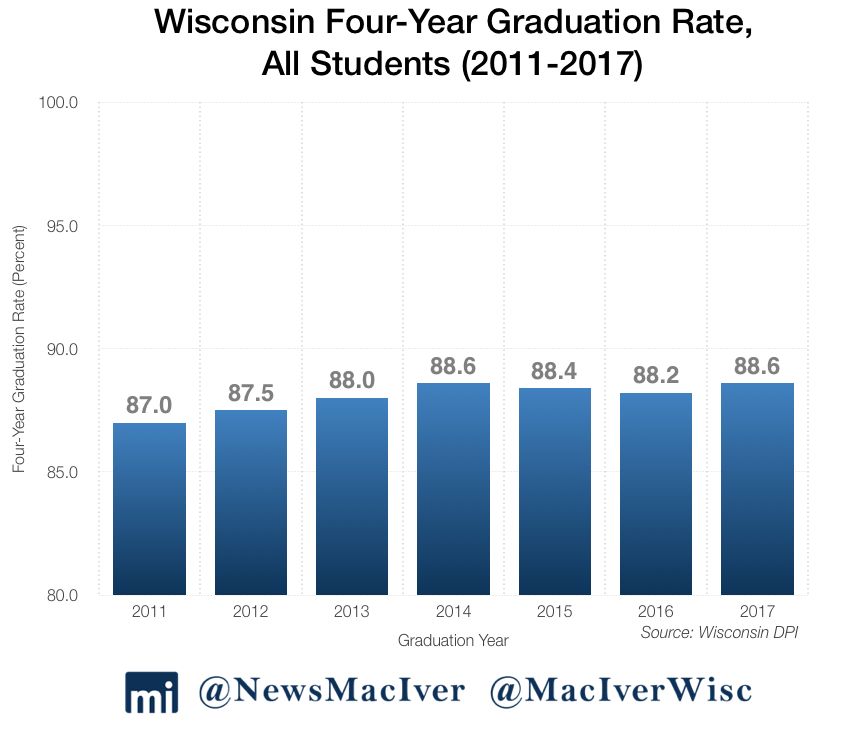 Students in Milwaukee Public Schools (MPS), the state’s largest public school district, generally fared worse than the state average, but showed some areas of improvement. The four-year graduation rate at MPS rose to 62.2 percent from 59.7 percent last year. That rate is considerably lower than the 88.6 percent statewide average. On the ACT Aspire, 24.2 percent of MPS students scored ready or exceeding in English, down from 31.7 percent last year. That’s less than half the statewide figure. In math, just 8.3 percent of MPS test takers scored ready or exceeding, down from 10.2 percent.

MPS graduates of the class of 2017 had a lower ACT exam participation rate than the class before them, with 90.6 percent of students taking the exam compared to 95.3 percent. That drop in participation could partly explain the increased average composite score, which grew from 16.1 out of 36 to 16.5. English composite scores increased from 14.7 to 15.1, and math scores increased from 16.3 to 16.4. The percent of students considered college ready also grew accordingly.

While fewer 2017 MPS graduates took the ACT exam, more took the ACT + Writing. That participation rate grew from 72.1 percent last year to 80.3 percent this year. At the same time, the average writing score increased from 5.3 out of 12 to 5.5, a commendable increase considering the large growth in participation.