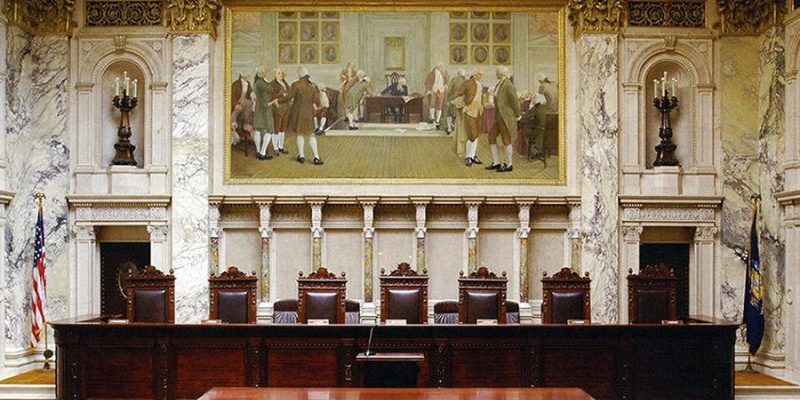 The ruling is another in a long line of court wins for Gov. Scott Walker’s 2011 public sector collective-bargaining reform law known as Act 10 #wiright #wipolitics Click To Tweet

Once again, the state Supreme Court has ended another litigation ploy by big labor.

The ruling is another in a long line of court wins for Gov. Scott Walker’s 2011 public sector collective-bargaining reform law known as Act 10, which has faced a litany of lawsuits from organized labor and their allies.

In its 5-2 decision, the court found that the Wisconsin Employment Relations Commission did not exceed its authority in requiring labor groups to file petitions for certification elections in a timely fashion. It also upheld the constitutional authority of government agencies to promulgate rules in support of laws.

“Thus, we reverse the decision of the court of appeals and reinstate WERC’s orders dismissing the Unions’ petitions for election,” concludes the Supreme Court majority opinion, written by Justice Annette Kingsland Ziegler.

Ultimately, the decision is more instructive than restorative. The unions continued to represent members during the appeals process and filed petitions before the deadline the following year. They lost nothing in the bargain but, once again, the Supreme Court has ended another litigation ploy by big labor.

SEIU and WASP made their arguments after they were tardy in filing petitions to be named as collective-bargaining representatives on 2014 certification ballots.

SEIU and WASP made their arguments after they were tardy in filing petitions to be named as collective-bargaining representatives on 2014 certification ballots. WERC subsequently voted not to accept the unions’ petitions because they were not filed in a timely manner.

The unions sued, arguing that they shouldn’t have to file a petition in the first place because, as the sole unions already representing their respective employees, they are required under Act 10 to go through an annual recertification vote. In essence, they shouldn’t need to file a petition and that the requirement is invalid to begin with. Further, the “absence of a statutory requirement … means that the legislature did not intend for there to be any requirement.”

DiMotto decided that WERC had “neither express nor implied power to impose a condition precedent to its statutorily mandated duty; and that such a requirement was unnecessary because an incumbent labor organization has a ‘real, de facto and legal interest in continued representation.’”

An appeals court agreed with DiMotto.

The Supreme Court doesn’t share those interpretations of the law.

WERC has “express authority” under Wisconsin Statute Chapter 111 to “promulgate rules that require a demonstration of interest from labor organizations interested in representing collective bargaining units.”

“Consequently, we reinstate WERC’s orders dismissing the Unions’ petitions for election as untimely,” the opinion states.

Wisconsin’s enabling statute, giving agencies the ability to create rules, “need not spell out every detail of the rule. If it did, no rule would be necessary.”

“Accordingly, whether the exact words used in an administrative rule appear in the statute is not the question,” the ruling states.

As for the petition requirement, the decision notes that WERC necessarily must determine which labor organizations have an interest of being on the certification ballot. The unions’ argument is a presumption – that they would continue to be the only collective-bargaining agent for government employees they had previously represented. WERC is not allowed under law to assume such things.

“(T)here is no statutory indication that past representation triggers a presumption of interest in future representation,” the Supreme Court ruling states.

“In this regard, we reject the argument that the rules were not necessary because a current representative has a continuing interest in representing the bargaining unit.”

Wisconsin unions have repeatedly tried - and failed - to bring down Act 10 in the courtroom, losing at the state and federal levels. #wiright #wipolitics Click To Tweet

James Daley, chairman of the Wisconsin Employment Relations Commission, said the decision underscores the Legislature’s authority to entrust WERC to “execute their wishes in regards to collective bargaining in Wisconsin.”

Daley said the expectation of unions filing required paperwork in a timely fashion is no different than candidates for office – incumbents or newcomers – expected to file nomination papers on time.

Wisconsin unions have repeatedly tried – and failed – to bring down Act 10 in the courtroom, losing at the state and federal levels. That hasn’t stopped the endless litigation.

“Our goal is to create an election atmosphere for collective-bargaining elections that is respectful and takes every voter into account,” he said. “This is a simple case where the union failed to apply in a timely manner.”

Wisconsin unions have repeatedly tried – and failed – to bring down Act 10 in the courtroom, losing at the state and federal levels.

That hasn’t stopped the endless litigation.

Earlier this month, the state Supreme Court rejected an argument by Madison Teachers Inc. that they should be allowed access to voter names while a union certification election is going on. The union, which has filed other lawsuits against Act 10, claimed it wanted to make sure WERC was fairly administering elections.

The court, again in a 5-2 decision, ruled that WERC did not violate Wisconsin’s open records law in denying access to the names until after the voting period concluded.

Operating Engineers of Wisconsin Local 139 and Local 420 recently filed a lawsuit moving to kill Act 10, this time using the Janus v. AFSCME case in the U.S. Supreme Court as a pretense.

Organized labor is hurting in the wake of laws that have given workers the right to choose whether they want to be in unions. Many are taking a pass.