MADISON, Wis. – The state Senate is looking to sunset a proposal by Gov. Scott Walker aimed at stabilizing premium increases for plans sold on the state’s Obamacare exchange.

Walker’s plan is intended to stanch the bleeding that Wisconsinites who buy individual coverage through Obamacare have suffered from astronomical premium increases – 36 percent in 2018 alone.

Wisconsinites in 2018 saw a massive 36 percent premium increase and have seen steep declines in the number of insurers participating in the Obamacare market.

The plan provides $200 million per year for a reinsurance program, which is a sort of stop-loss coverage for health insurance companies with large claims. Under Walker’s proposal, the state would pay for 80 percent of insurance companies’ claims that cost between $50,000 and $250,000.

The federal government would cover 75 percent of the estimated $200 million annual cost, leaving $50 million in costs to the state. That amount would be covered by anticipated savings in the state’s Medicaid program, officials have said.

Walker said in his State of the State speech that his reinsurance proposal is a market-oriented way to lower costs. Insurers would have an incentive to keep costs below the upper limit of what the state would help cover.

While the reinsurance plan is intended as a shorter-term effort to prevent another massive premium hike for Wisconsinites who get individual insurance coverage through Obamacare, it’s potentially a permanent new expense. The Senate is evidently looking to make sure that doesn’t happen, putting a time limit on the reinsurance with the expectation that Congressional Republicans will eventually coalesce around a plan to repeal and replace Obamacare.

“I can tell people are starting to pay attention, they’re starting to look at it a little bit closer and say, you know, what is not only the impact of this, but what does this look like, kind of politically as you…get closer and closer to maybe adopting something,” he said.

Fitzgerald confirmed that a sunset provision is being considered. “That is part of the discussion,” he told reporters.

.@SenFitzgerald talks about passing #reinsurance in six weeks – and if it would sunset… #WIright pic.twitter.com/5R9slUPkXQ

Reinsurance has been implemented in Alaska, Oregon, and Minnesota. Proponents say that while it’s a direct government subsidy of insurance companies – similar to other federal subsides that Republicans in Congress have cancelled – it’s necessary because Obamacare rate hikes are so sharp. 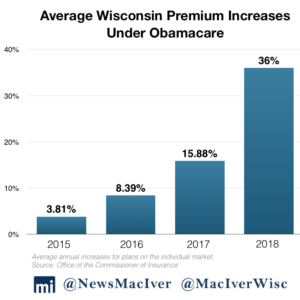 Wisconsinites in 2018 saw a massive 36 percent premium increase and have seen steep declines in the number of insurers participating in the Obamacare market. The percentage increases for Obamacare plans have roughly doubled each year that Obamacare has been in effect. For 2017, premiums for Obamacare-compliant plans in Wisconsin increased 15.88 percent.

Exacerbating the problem of sharp price hikes has been the decline in competition as insurers flee the Obamacare market. Wisconsin counties have lost an average of five insurers on the individual market per county between 2016 and 2018. Plans offered on the Obamacare market – a significant subset of insurance plans on the individual market – have declined by an average of 2.44 plans per county over that time.

#Obamacare has sent the individual market in WI into a death spiral. Watch as insurers flee the state's exchange from 2016-18:#wiright pic.twitter.com/nVQ9piqUEH

Walker’s plan is a “bifurcated” attempt to stabilize Obamacare, deputy insurance commissioner J.P. Wieske said. One of its aims is to get premium increases under control in the shorter term with the reinsurance plan. Another is to try addressing the federal health law’s fundamental flaws stemming from its blanket “guaranteed issue” provision which mandates insurance companies provide coverage to anyone regardless of pre-existing conditions or gaps in coverage. That creates an incentive for some people to wait to get coverage until they’re sick.

Walker has instead asked the Legislature to pass a bill by Rep. Joe Sanfelippo (R-New Berlin) that changes how coverage for pre-existing conditions is treated. The bill, already passed by the Assembly last fall, extends guaranteed issue for people with continuous coverage. It also directs the state Office of the Commissioner of Insurance to create a plan to provide insurance for people who have gaps in their coverage.

The governor also wants the state Department of Health Services to request a permanent waiver from the federal government for SeniorCare, the state’s prescription drug benefit for the elderly. The program has relied on shorter-term waivers since its inception in 2002. The current waiver extends the program through the end of 2018.

The Legislature will have to act on Walker’s Obamacare stabilization plan this session because of the timeline insurance companies must follow in formulating 2019 rate increases. OCI also plans to have draft waivers for public input in March and submission to the feds in April.