[West Bend, Wisc…] Washington County thinks it can fund all its highway improvements over the next 32 years without an increase in the gas tax or raising other taxes and fees. The plan is simple: make transportation infrastructure a top priority in its budget.

That is the cornerstone of the county’s 2050 Transportation Network Sustainability Plan, which officials are promoting through the #JustFixIt campaign.

Rather than just complain about the amount of  federal or state government funding for local roads, the county is proactively moving forward “to achieve a financially sustainable transportation network for Washington County.”

“Washington County is leading the way to #JustFixIt by putting forth a plan which would 100% fund the maintenance, resurfacing and reconstruction of all county highways for the next three decades,” said County Administrator Joshua Schoemann. “I believe this plan will serve as a model across the State, further demonstrating how setting priorities can result in solutions to maximize the use of every taxpayer dollar we receive and meeting the expectations for essential government services.”

Schoemann has raised some eyebrows by branding this plan “#JustFitIt.” The Transportation Development Association has been using that same hashtag in its campaign to raise the state’s gas tax. Schoemann told MacIver News his version will “just fix it” by making road repairs a priority – not by making higher taxes the priority. Washington County started this process by taking a long hard look at itself.

“We went through a ranking of priorities and then we rank every program against those priorities,” Schoemann said. “There have been literally dozens that we’ve eliminated or given over to nonprofits, saving hundreds of thousands of dollars.”

That will go a long way towards Washington County’s #JustFixIt campaign.

Washington County is responsible for 186 miles of highway. It estimates improvement and maintenance will cost $143 million over the next 32 years, including adjustments for inflation. If the county adopts the 2050 Transportation Network Sustainability Plan, officials predict it will ultimately result in a $9 million surplus.

The county currently budgets $3 million a year on road work from its 0.5 percent sales tax collections. The county estimates it will be able to increase that by 3 percent a year until at least 2030, and after that reduces it to 1 percent. The plan also assumes that state aid will remain stagnant at $490,000 each biennium throughout the 32-year plan.

Other funds are expected to become available along the way to further offset costs. For example, the county currently has a $2 million 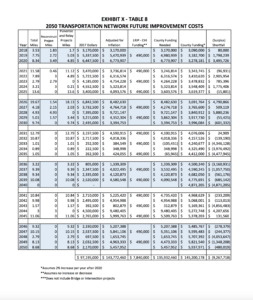 economic development fund that ends in 2022. At that point, any remaining funds could be redirected towards road work.

All the major road reconstruction projects are front loaded into the first 11 years of the plan. That’s meant to take advantage of the current low borrowing rates and the political climate in Wisconsin that’s led to the elimination of prevailing wage and efforts to reform state wet lands regulations.

The $9 million surplus will be spent along the way. The highway department plans to use it to build 3 roundabouts and reconstruct 6 bridges over the next 32 years.

The Public Works Committee approved the plan on Jan 24. The county will take it up on February 13th.

Schoemann said the county board is excited about the plan, but his colleagues in other counties are more skeptical.

“The feedback I’ve received is ‘well you might have figured it out, but the rest of us haven’t or can’t or what have you,’” Schoemann said.

Washington County wouldn’t be the only county to figure out how to fund road repairs without a tax hike. Marquette County has managed to maintain the best roads in the state through prioritization just within its highway budget. That’s resulted in 99 percent of Marquette’s county highways being in fair or better condition. Incredibly, the county receives almost the smallest amount in state aid of any Wisconsin county.

By reprioritizing the entire county budget, Schoemann expects even better results in Washington County. He believes if Washington County can #JustFixIt through making road maintenance a genuine budget priority, there’s nothing standing in the way of other local governments adopting the same solution.