MADISON, Wis. – Wisconsin’s downward trend in union membership could be leveling off as a result of an influx of blue collar jobs in the private sector.

The Bureau of Labor Statistics released updated union membership numbers for 2017 on Friday. Last year in Wisconsin, membership rose from 8.1 percent to 8.3 percent, which comes out to an increase of 11,000 workers. Altogether out of a total of 2.78 million workers in Wisconsin, 230,000 are union members.

Meanwhile, the state Department of Workforce Development released new employment numbers on Thursday, that showed blue collar trades are the fastest growing industries in the private sector. From spring of 2016 to spring of 2017, Wisconsin gained 5,577 construction jobs, 3,771 manufacturing jobs, and 2,816 utility/transportation jobs. 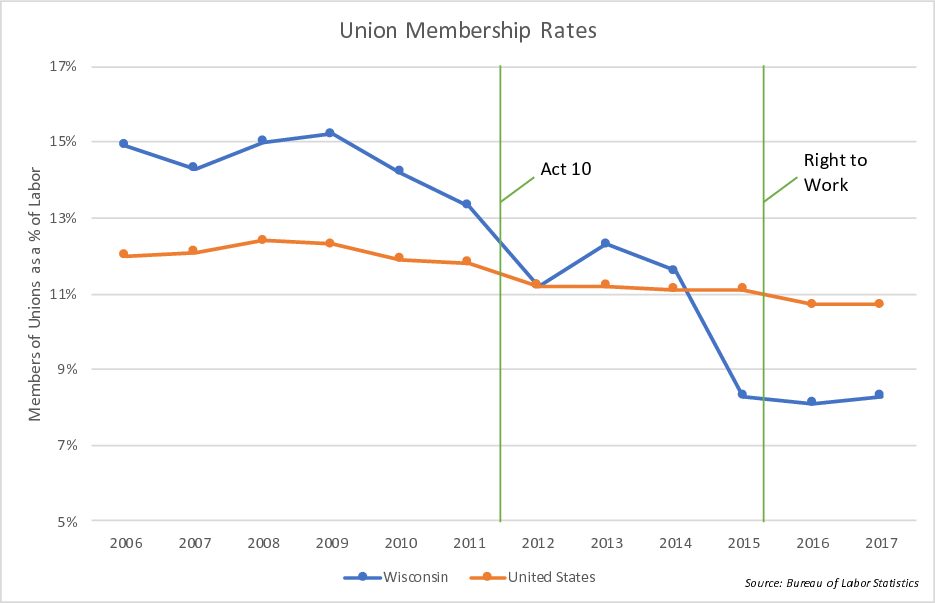 The BLS numbers on Friday do not indicate how many members are in private versus public sector unions. However, previous reports found a majority of the statewide drop in union membership from 2009 to 2016 came from the public sector following Act 10. The 2017 data indicating from where the recent uptick derives will not be available until later this year when the Census Bureau releases its own data.

The Census Bureau surveys about 60,000 households around the country every month. A quarter of those households are asked questions about union affiliation. BLS averages out the monthly union responses for each year and releases its findings annually in the Union Membership Survey.