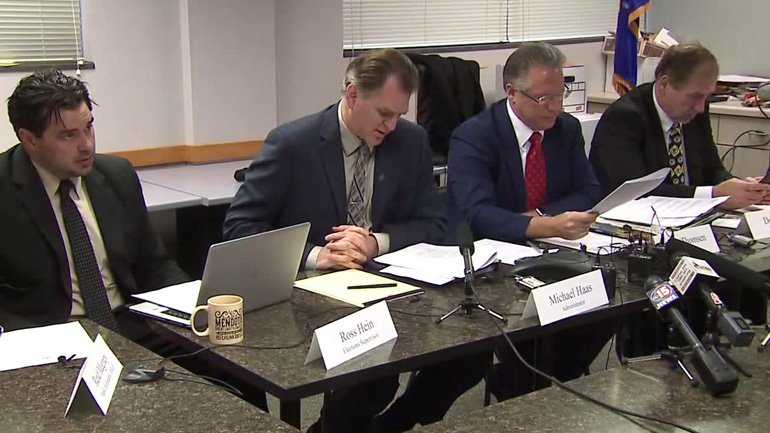 MADISON, Wis. – The Wisconsin Elections Commission is doubling down in its defense of staff integrally involved in the state’s infamous John Doe investigation.

He made his comments about Trump not long after he told reporters, “My objective is to make sure we have fair, efficient elections and try to avoid any distractions.”

The Elections Commission is asking Gov. Scott Walker’s office to appoint an attorney to represent the commission.

Meanwhile, the state Ethics Commission sent a letter to Attorney General Brad Schimel earlier in the day insisting the Wisconsin Department of Justice’s bombshell report on government abuses in the John Doe investigation contained “omissions and inaccuracies” regarding the commission’s involvement in the probe.

Later in the day, Schimel, a Republican, shot back that the DOJ stands by the report, contesting the Ethics Commission letter point by point.

“Although the commission’s letter generally describes ‘omissions and inaccuracies’ in the report, your letter does not, in fact, specify a single error in the report,” the attorney general wrote.

“Although the commission’s letter generally describes ‘omissions and inaccuracies’ in the report, your letter does not, in fact, specify a single error in the report,” the attorney general wrote. “Only six specific claims by the commission could be charitably called errors, yet closer inspection reveals that the commission is not actually claiming DOJ inaccurately portrayed any event.”

“The commission’s letter simply disagrees with DOJ’s characterization of certain events and criticizes the tone of certain portions of the report. These are not serious criticisms and certainly do not point out any errors in the report.”

The DOJ report on its year-long investigation into leaks of sealed John Doe court documents to a liberal British publication in September 2016 details a rogue agency of partisan bureaucrats bent on a mission “to bring down the (Gov. Scott) Walker campaign and the Governor himself.”

The AG report details an expanded John Doe probe into a “broad range of Wisconsin Republicans,” a “John Doe III,” as described by the attorney general, that widened the scope of the so-called John Doe II investigation into dozens of right-of-center groups and scores of conservatives. Republican lawmakers, conservative talk show hosts, average citizens – even churches – were secretly monitored by the dark John Doe.

State Department of Justice investigators found hundreds of thousands of John Doe documents in the possession of the Government Accountability Board, long after they were ordered to be turned over to the Wisconsin Supreme Court.

The GAB, the state’s former “nonpartisan” speech cop and predecessor of the Ethics Commission, proved to be more partisan than originally suspected, the report found. For reasons that “perhaps may never be fully explained,” GAB held onto thousands of private emails from Wisconsin conservatives in files marked “Opposition Research.” The report’s findings validate what conservatives have long contended was nothing more than a witch-hunt into limited government groups and the governor who was turning conservative ideas into public policy.

While the report is replete with criminal violations apparently committed by government bureaucrats and partisan prosecutors, Schimel said he could not issue charges in the illegal leaks. He said record-keeping and security at the old GAB and the Ethics Commission office were so sloppy that he cannot, beyond a shadow of a doubt, identify the leaker – although the report makes clear that the leaked documents more than likely came from within the GAB. Ethics Commission officials assert they cleaned up the security and record-keeping problems.

Thomsen told reporters Tuesday the commission needs an attorney to help it obtain access to John Doe documents that would support the commission’s versions of events, and to obtain the sealed letter filed with the John Doe judge.

“I’m a lawyer. I haven’t read anything in the attorney general’s report that gets close to contempt,” the Elections Commission chairman said. Commission employee Nathan Judnic, formerly a GAB attorney who worked the John Doe investigation, is among the officers of the probe that could face contempt charges.

Schimel’s report includes emails showing GAB staff members, including former lead attorney Shane Falk, assembling and saving illegally obtained John Doe evidence long after the John Doe judge in early 2014 told the government agents to stop. And it appears those government agents held on to hundreds of thousands of documents long after the state Supreme Court ordered the investigation shut down for good, that the secret probe was unconstitutional, and that all Doe documents be delivered to the court.

The attorney general’s report also details a sloppiness that slips into criminal negligence in the handling of private, court-sealed documents.

State Sen. Steve Nass R-Whitewater, has called for the firing of Judnic and Elections Commission director Michael Haas, among others. The commission appears to be standing by Haas, who, in return, is standing by Judnic.

Both agents have been shown in previously released emails from the John Doe case to have made questionable comments, seemingly exposing a partisan bias against the conservatives they targeted. Judnic, according to online posts, was a passionate opponent of Gov. Scott Walker’s 2011 Act 10 legislation, a driving force behind the effort by unions and Democrats to recall the Republican governor. The 2011-12 recall campaign was at the core of the abusive John Doe investigations.

As Wisconsin Watchdog reported in May 2016, while the state Legislature was deciding whether to approve Haas’ nomination as Elections chief, the long-serving bureaucrat was an aide for then-Assembly Speaker Tom Loftus, D-Sun Prairie, in 1989.

“Haas was at the center of a campaign finance controversy that predated the so-called “Caucus Scandal” more than a decade later and the more recent unconstitutional John Doe probe,” according to the publication.

Former conservative talk show host Charlie Sykes, apparently targeted in the most recent political John Doe, wrote in a 2003 investigative piece for the Wisconsin Policy Research Institute that Loftus led a Democratic Caucus staff that devoted their time to political campaigns. Haas was a Loftus campaign staffer and a part-time worker in Loftus’ Assembly office.

And yet Haas was an active agent in the GAB/Milwaukee County District Attorney John Doe that, according to the attorney general’s report, was expanded to investigate whether Republican staffers were doing campaign work on the taxpayer’s dime.

Haas on Tuesday told reporters that he had a marginal role in the John Doe investigation. Schimel’s report states, “Haas was involved with reviewing and editing court filings.” And previous emails released in court settlements show Haas was very involved in John Doe communications and meetings with GAB staff.

Asked about why the GAB had files of John Doe documents labeled “Opposition Research,” Haas repeated the curious comments his former colleague Shane Falk made to media last week – that the files came into the agency labeled that way.

“Those were from search warrants not issued by the GAB, and approved by the John Doe judge,” he said.

Of course they were. The Government Accountability Board had no such authority, but that didn’t stop the agency from working alongside prosecutors in coming up with plans to raid the homes of conservatives and tap into millions of electronic communications. It’s those documents, illegally obtained by the illegal John Doe – documents that conservatives did not know had been seized – that apparently were included in the GAB files marked “Opposition Research.”