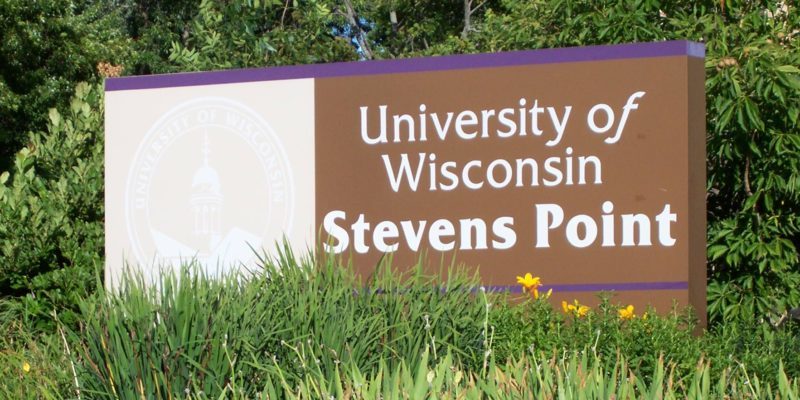 Update: Friday afternoon, the UW-Stevens Point Student Affairs Office announced it would overturn the decision denying Turning Point USA’s request to be an official campus group, citing media pressure and a failure of student government to act on the matter at its Nov. 16 meeting.

“Why exactly is it titled Victims of Communism? That seems negative towards communism,” the student asked.

MADISON, Wis. – A Facebook meme saying “socialism sucks” and accusations of racism were among the many reasons liberal student government leaders at UW-Stevens Point felt “targeted” enough to reject a conservative group’s request to become a student organization.

One student, identified as ‘Benny’ in the minutes, pointed out the “socialism sucks” image – a common meme among right-leaning groups – that he found on Turning Point’s Facebook page.

According to @UWStevensPoint
minutes, one student felt "targeted" by a "socialism sucks" meme on @TPUSA's Fb.

"We shouldn’t have to watch our backs going to class and going on Facebook."

So, you can't say #SocialismSucks if you want to be a student group at UWSP.#FreeSpeech https://t.co/TC2ZhiHVkS

“We do not feel socialism is a good form of government,” said a student named David in defense of Turning Point’s request for official status as a campus organization.

He also asked, “Respectfully aside from socialism, what communities have been targeted?”

Benny replied by saying he took offense to a quote on Turning Point’s website implying that cries of racism is a common retort by leftists after losing arguments based on facts.

The same student lamented that the @TPUSA website quotes, “I generally don’t get called racist but it’s only when I win an argument with a liberal.”

The UWSP liberal calls this "bashing the liberal community."

TPUSA student: Again, this goes to the #FreeSpeech irony. https://t.co/n1lbLgfg1z

David called this critique “free speech irony…We need to open up a dialogue and we feel it’s important we do that. It’s very easy to throw a label at somebody.”

Turning Point’s national “watch list” of left-wing bias by college professors was another topic of the lengthy questioning.

A Turning Point critic identified as ‘Stahl’ in the minutes asserted the watch list shares personal information and questioned the group’s intent to foster civil dialogue about the merits of free market capitalism.

“With this type of sharing of personal things, how do you think we can create a space where this type of dialogue can happen?” he asked.

“If you come up to me and say ‘capitalism sucks,’ you will not be put on the watch list for things like that. I will challenge you to a debate. It’s not meant as a form of intimidation,” Turning Point advocate David responded.

One exchange over the presence of racism on campus, touching on the watch list of left-wing professors, got heated as Benny grilled Turning Point advocates over which leftist ideologies and rhetoric would land a professor on the list.

“Three news sites were talking about how if a professor says white privilege is a thing or if climate change is a real thing, they are put on this list. They are just doing their jobs to educate the students that attend their university. So when you say you are not targeting people, all I see is hypocrisy,” Benny said at the end of an extended monologue.

That was before a testy exchange over racism on campus.

Benny: I did not mention anything about reverse racism not existing. I am saying that the organization you affiliate with says racism does not exist. Where do you stand on that?

Emily: I said I do believe in racism, but I believe in both sides of racism.

Then why do you affiliate with an organization that says there is no racism?

Emily: I am not officially.

“Point of order, please keep this professional. This is a respectful environment. We need to be respectful of everyone’s viewpoints,” said ‘Caucus Chair Quandt’ after further exchange, according to meeting minutes.

On multiple occasions Turning Point’s opponents tried forcing the group’s advocates to distance themselves from the national Turning Point organization. “I’m wondering if going forward you are able to create a space where you can have an open conversation without being associated with this larger group,” asked Stahl.

.@TPUSA's opponents tried forcing the group's advocates to distance themselves from the national org Click To Tweet

Some Turning Point critics probed into whether Turning Point advocates consider the Republican Party to be a sort of safe space. One questioner, identified as ‘Director Scheder,’ probed about how the group would separate itself from the College Republicans.

“Have you talked with College Republicans to team up on something and have those ideologies come together?” Scheder asked.

Another, Senator Martin-Smithwick, asked, “You talked about how you did not [feel] comfortable in the Republican Party, can you discuss more on that and what separates you from that?” Turning Point supporters dutifully described their differences with some of the GOP’s policy positions.

Martin-Smithwick and one ‘Caucus Chair Fox’ questioned the group’s need for official campus standing, a badge that is often approved with little or no debate.

“Why do you need to make it into an org, why not just hold events and incorporate other parties into this event?” Martin-Smithwick asked.

Fox followed, “Why did you want to become an org when you already have funding?”

David replied that there are a range of left-leaning campus organizations and that Turning Point would deliver a message in support of capitalism.

“Why exactly is it titled Victims of Communism? That seems negative towards communism,” the student asked, seemingly unaware that scholars widely agree communist regimes have led to large-scale human suffering and death tolls in the tens of millions.

Martin-Smithwick said Turning Point’s opposition to communism would mean the group would exclude some people – like communists. “Would you think about getting people who are in direct support of communism?” the student asked.

Questions from the audience followed a similar cadence. One student calling herself Vanessa said, “This image (possibly referring to the “socialism sucks” meme) was taken from their Facebook page and shows they are bias against liberals…I feel it is a danger to have this org on campus. I ask you represent the students on your campus.” 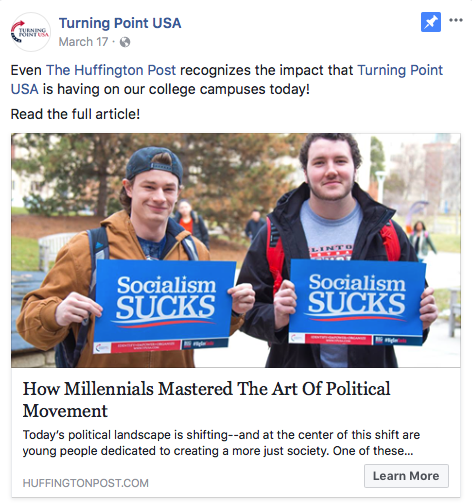 A representative from the College of Letters and Science lamented, “We feel that by recognizing them, we will fail to create a diverse and inclusive environment. Allowing this org will cause students to feel unsafe and unwelcome and now [sic] want to attend this university at all.”

Diversity of thought, it seems, doesn’t count as real diversity in this individual’s analysis.

Another student who said he is a member of BSU (Black Student Union) took the accusation that free market supporters are insular racists as fact, saying, “I’m wondering if this org will talk to people of color. A lot of people on this campus would feel targeted by this org.”

More than 20 speakers from the gallery spoke, most decrying the group as one that promotes racism and division but with few presenting evidence. Some demanded Turning Point’s campus chapter disavow the national group, change its name and amend its constitution to liberal protesters’ liking.

In exchange for the group’s agreement to radically alter its identity and mission in the ways demanded by speakers from the gallery and student senators, the student government would postpone its vote. Turning Point speakers said no – “We will not disassociate from our parent organization. It is who we are and where we come from,” Emily said.

Just two spoke in support of Turning Point. “I am ashamed we treat our fellow students in this fashion,” one said.

The lengthy interrogation ultimately was wasted breath for Turning Point’s advocates. The student government rejected the group’s petition in a secret ballot process, meaning who voted yes and who voted no isn’t a matter of record.