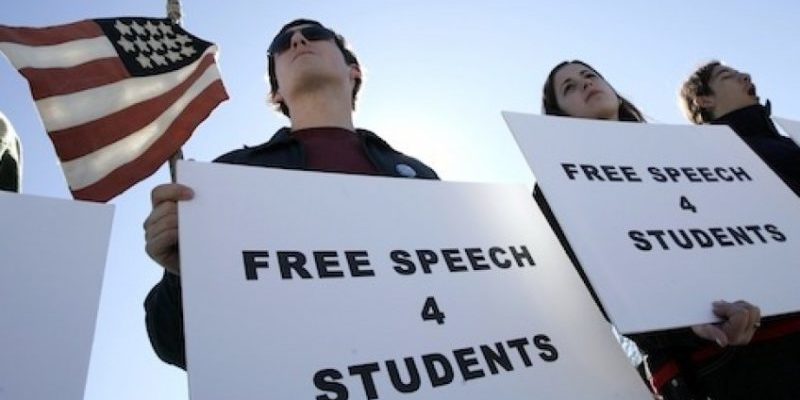 Madison, Wis. – A lawsuit may be looming if the University of Wisconsin-Stevens Point student government doesn’t do a 180 on its position denying a conservative group the right to exist, sources tell MacIver News Service.

Amelia Heup, chairwoman of the College Republicans of UW-Stevens Point, said she has heard from student representatives of Turning Point USA that the organization is “getting ready for litigation.”

Officials from Turning Point could not be reached for comment.

The SGA did so after several “safe space” liberal students cried “hate group” at a student government meeting Thursday.

Nonprofit Turning Point USA’s mission is to “identify, educate, train and organize students to promote the principles of fiscal responsibility, free markets, and limited government,” according to the group’s website. Leftists have tried to label Turning Point as an “alt-right” hate group, because labeling is what leftists do.

SGA appears to be standing firm, although it now notes that Turning Point was allowed “temporary recognition.” Such recognition had nothing to do with student government leaders, however, and the future of the local chapter is now in the hands of administrative review.

On Monday, SGA said they were just following their constituents’ demands in denying recognition to Turning Point.

But Sen. Patrick Testin (R-Stevens Point), said a group of vocal, liberal students should not be allowed to stifle the First Amendment. Testin, a UW-Stevens Point alumnus, and Heup joined MacIver News Service Wednesday morning on the Dan O’Donnell Show on NewsTalk 1130 WISN in Milwaukee.

The senator said he contacted Chancellor Bernie Patterson Tuesday expressing his concerns about the matter.

“I believe they are hoping the SGA will take this upon themselves and reverse the decision, but if that doesn’t happen the administration is prepared to step in and overturn their decision because, quite frankly, this opens up the university to a lot of liability as far as legal challenges go because this is a direct violation of students’ First Amendment rights.”

A university spokesman did not return an email seeking comment.

“The Student Government Association at UW-Stevens Point will continue to work with all student organizations and the Office of the Vice Chancellor of Student Affairs,” the SGA said.