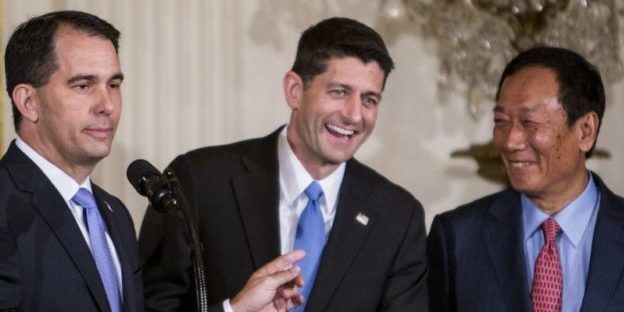 MADISON, Wis. – On Friday afternoon, Foxconn Technology Group founder and CEO Terry Gou looked out upon a crowd of welcoming Wisconsinites assembled in Racine and declared, “It’s good to be home.”

While the price tag is hefty, the economic impact of this transformational project cannot be overstated, even if Walker himself recently understated its value to his re-election campaign.

“This is a once-in-a-lifetime opportunity for Wisconsin, and this agreement provides Foxconn with the incentives the company needs to move forward with this significant investment while at the same time fully protecting the interests of Wisconsin taxpayers,” Walker said in a statement released after he and Gou signed a historic contract that officially launches Foxconn’s unprecedented development plan – and in many ways the beginning of Walker’s bid for a third term.

While the price tag is hefty, the economic impact of this transformational project cannot be overstated, even if Walker himself recently understated its value to his re-election campaign.

To build the manufacturing campus, a city unto itself, the multi-billion-dollar project will require an army of construction workers.

The supply chain serving the Foxconn operation is conservatively projected to pump $1.4 billion into the economy.

“That is a big win for everyone in Wisconsin,” Walker said.

Democrats, particularly those who aspire to challenge Walker in 2018, have nearly universally pounded the economic development deal, however, criticizing it as a giveaway to a foreign billionaire and a bad deal for taxpayers.

But a majority of Wisconsinites don’t quite see it that way.

A Marquette Law School Poll last month found 54 percent of respondents in Milwaukee and surrounding counties believe the Foxconn factory in Racine County will substantially improve the economy in southeast Wisconsin, while 37 percent believe it will not.

The same poll finds 48 percent of respondents think the $3 billion in state incentives to Foxconn to be more than the plant is worth, while 38 percent say the factory will provide that much or more in benefits to the state. But the negative return on investment notion is built on flat and false assumptions pushed by the left. In a static vacuum of development, it would take 25 years for Wisconsin to break even on the deal.

This project, however, is anything but static. The economic ripples from the Foxconn project are expected to create a wave of direct and indirect investment that will transform the economy of the state and the region.

Of course, if there are delays and glitches in the coming months, Democrats will pounce. But Terry Gou and his team sound eager to get “Wisconn Valley” off the ground.

Walker opponents will frame November ’18 as a referendum on President Donald Trump and the Republican-controlled congress. They’ll try to retread old, failed narratives about the devastation done by Act 10 (the $5 billion-plus and counting in taxpayer savings more than suggest otherwise), or Walker’s refusal to take “free” federal Medicaid money (a move that proved sagacious in the wake of the death spiral that is Obamacare).

But like most elections, 2018 promises to be another “it’s the economy stupid” contest, and Walker has a lot of good economic news to run on. The unemployment rate is at generational lows, the state’s fiscal health is strong, and Wisconsin has become recognized by CEOs across the nation as a place to do business. As the steel girders and concrete and glass of the massive manufacturing campus begin to rise, Walker and Republicans will point to the building momentum of Foxconn, and Democrats’ failure to support it.

As Foxconn finds a home in Wisconsin, its success will only bolster Walker’s campaign for a third term.