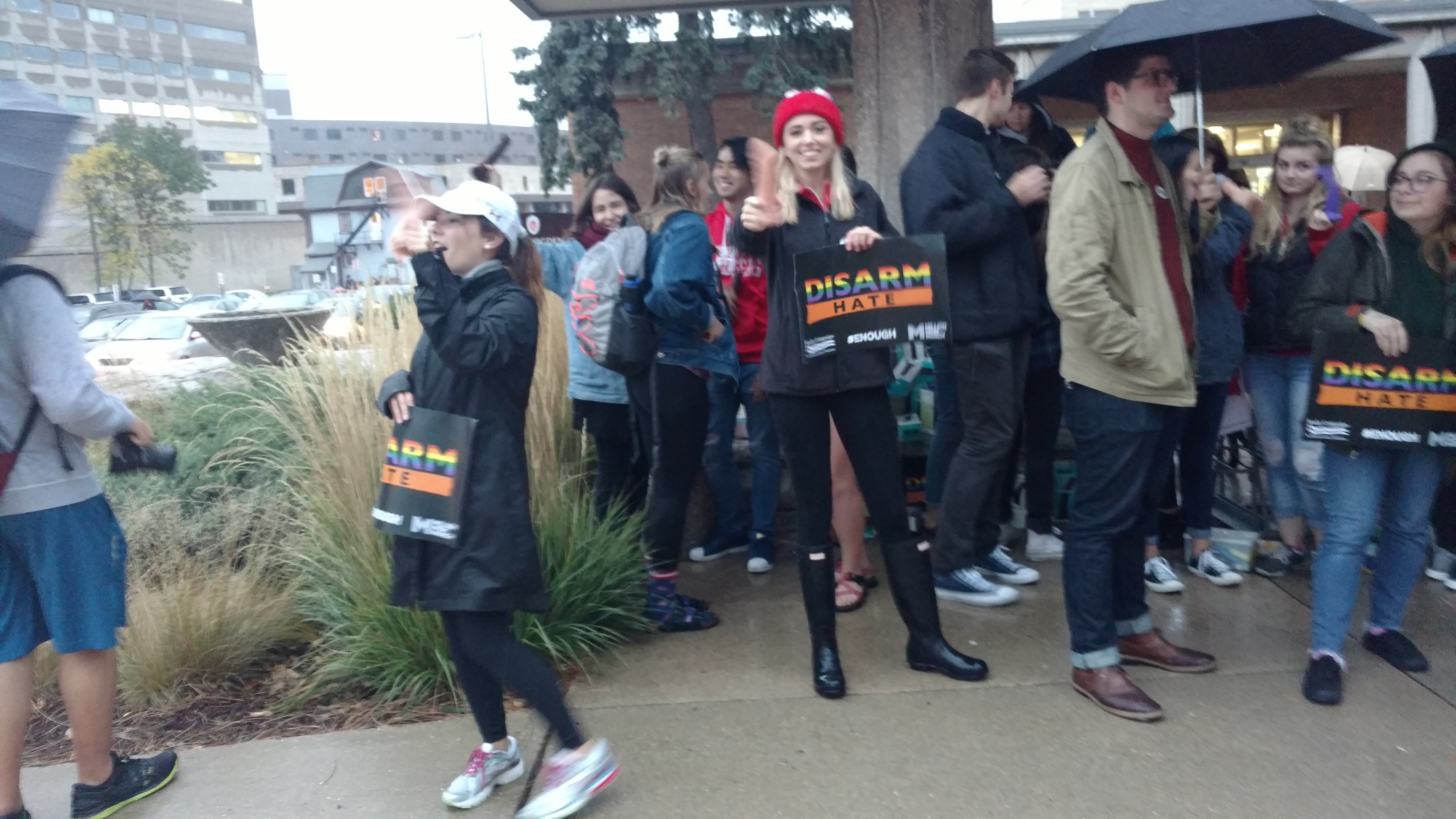 [Madison, Wis…] Just when you thought the extreme left couldn’t get any more surreal, well, enter Cocks Not Glocks.

As MacIver News Service reported last week, the University of Wisconsin-Madison chapter of the anti-gun student group demonstrated against the Second Amendment – and the “rape culture” – by waving around plastic penis sex toys.

They shrank, however, when confronted with some inconvenient truths.

Michelle Walker, a UW Madison sophomore and member of Young Americans for Freedom, the student organization that sponsored Pavlich’s speech, stood up Tuesday to the protesters’ cry to keep guns off campus.

“So you want to be raped?” Walker asks the 20 or so demonstrators. Watch the video of the exchange here

A young woman, seemingly stunned by the question, screams, “No one said that!”

“You guys are insulting survivors by not allowing them to defend themselves,” Walker shoots back.

There is a stunned pause by the anti-gun crowd, as if they’re not sure how to process the information they’ve just received.

Suddenly, the lead sex toy wielder snaps out of her protest paralysis, turns to her fellow demonstrators and conjures up a familiar left-wing chant: “Show me what democracy looks like!”

“This is what democracy looks like!” the small crowd chants back.

Walker, exhaling a plume of cigarette smoke, futilely tries to reengage. The sex toy army only shakes their plastic penises in the air and chants, “Cocks not Glocks,” like some perverse Tiananmen Square scene.

“I decided to ask them why they were against having guns on campus for the sake of having self-defense for women, because these are the people that also claim they want to end the rape culture and educate men on how to not rape women and things like that,” Walker told MacIver News Service last week on the Vicki McKenna Show, on NewsTalk 1310 WIBA. “So I figured it would be a valid question for them. And they didn’t really have an answer for me. All they did was ask me why I wanted to shoot people and kill people instantly.”

“They basically asked me why I wanted to defend myself against a rapist with a gun,” she added.

In Wisconsin, law-abiding citizens may carry a concealed weapon, with a permit. A bill pending in the Legislature would end the permit requirement, adding Wisconsin to the 12 states that have constitutional carry laws.

Public schools still could prohibit carrying concealed weapons in buildings, but only under the state’s trespassing laws.

Only Utah has a statute specifically declaring that public colleges and university do not have authority to ban lawful concealed weapons on their property, according to the National Conference of State Legislatures.

Walker said she knows students who have been caught defenseless in assault situations because of the prohibition on guns on college campuses. She recounted the story of her friend who was raped on another college campus.

“She had her concealed carry permit given to her by her state. She’s not from Wisconsin,” Walker said. “Since her campus banned guns, she was not allowed to have it at the time she was attacked and therefore she was attacked and faced all of the negative consequences in dealing with that, including dropping out of school and what not.”

Kat Kerwin, UW student and organizer of the “Cocks Not Glocks” event, told the Capital Times that such rhetoric is “divisive” and that Pavlich’s speech was designed to “divide campus.” Kerwin describes herself on Twitter as an “alternative right troller” and “gun violence prevention advocate.”

The assertion isn’t borne out by experience.

More than a year ago, Texas adopted campus carry on its public universities. Authorities say the law has had little impact on day-to-day college life.

“We have had no incidents since the law passed or since the law went into effect of criminal acts by license-to-carry holders,” Ed Reynolds, chief of the University of North Texas Police Department, told the Denton Record-Chronicle last month.

In fact, the Texas Democratic Party apologized earlier this month for trying to link the fatal shooting of a Texas Tech police officer to the state’s campus carry law.

“Hollis Daniels III, the 19-year-old freshman arrested in the shooting, could legally possess a pistol under Texas gun laws. But under campus carry, he would still be prohibited from carrying a concealed handgun into campus buildings or Texas Tech dorm rooms” because he isn’t over the age of 21, the Dallas Morning News reported.

Walker said she and her conservative friends will continue to push for campus carry. The outspoken sophomore says she refuses to be silenced by the left.

“I don’t want to let the university win in silencing me or progressive students at all,” she said. “I try to go out of my way to make sure they don’t silence me.”