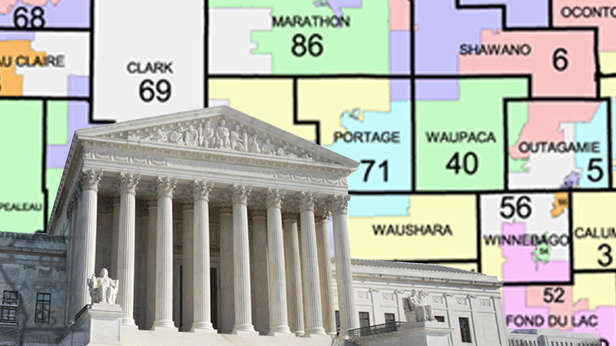 [Madison, Wis…] Wisconsin’s electoral maps were put to the test Tuesday morning during a tense session of oral arguments before the U.S. Supreme Court.

At stake is the survival of the redistricting plan put in place by the state’s Republican-controlled Legislature in 2011 and, ultimately, whether Wisconsin provides the proper test to determine whether such district boundaries are too political.

Perhaps Amy Howe, reporter for SCOTUSblog best summed up the significance of the day.

“Today may have been only the second day of the Supreme Court’s new term, but it may also prove to be the biggest,” she wrote. Although, a decision may not arrive until June, less than five months before the next major election.

Gill v. Whitford is the court’s first significant test in years on partisan gerrymandering, or the idea of crafting district lines for the benefit of one party, and whether courts should police such practices.

“When you have the law on your side, that’s a good place to be going into the argument,” he told MacIver News Service Tuesday afternoon.

Defenders of Wisconsin’s redistricting plan also have history on their side – and, perhaps, standing.

Tseytlin reminded the justices that the high court has never tossed out a map on the basis of partisan gerrymandering.

In 2004, the court narrowly determined it shouldn’t referee a Pennsylvania redistricting case, very similar to Wisconsin’s. But Justice Anthony Kennedy said at some point in the future a case so clearly partisan could rise to a judicable level – that is, meriting court review.

Liberals believe in their hearts the Wisconsin redistricting plan is that case.

They won last year when a lower court panel of judges, in a 2-1 ruling, determined Wisconsin’s district maps ran afoul of the Constitution by putting Democrats at a distinct disadvantage. Liberals complain that the redrawn maps give Dems little chance of ever winning back the Legislature, which they lost in the Republican revolution of 2010.

Their argument does not take into account that the GOP won a significant victory at that time fueled by voter discontent with the left and without the district maps in question. Nor do they mention voters fatigued by the friction and disorder of Democrat-led recall elections in 2011 and 2012, and that the state has trended red, most convincingly in the last presidential contest. In November, Wisconsin voters elected a Republican presidential candidate for the first time since 1984, an outcome not impacted by the electoral maps.

William Whitford, a University of Wisconsin Law School professor emeritus and lead plaintiff in the lawsuit, argues the state Assembly “bears no resemblance to its evenly split electorate.” He claims Republicans “wield legislative power unearned by their actual appeal to Wisconsin voters. This pro-Republican skew is no accident.”

Tseytlin counters that Whitford resides in a region of the state that is loathe to vote Republican, in a county teeming with Democrats. And that point, the solicitor general said, speaks to the question of standing in the case – whether Whitford is the correct person to bring a lawsuit. Standing was of keen interest to the justices.

“Look at the lead plaintiff. Professor Whitford lives in Madison, Wisconsin. (State Rep.) Chris Taylor (D-Madison) is his representative. Under any plan, he is going to have a liberal representative,” Tseytlin said.

“He has no standing. We are clearly correct on that.”

Kennedy, as he so often has been, is viewed as the swing vote in the Wisconsin case. The justice who brought American jurisprudence the “evolving standards of decency” concept, has asserted that there is not a constitutional guarantee of proportional representation. But Kennedy is seeking a standard that would help define constitutional and unconstitutional gerrymandering. His focus Tuesday was on the First Amendment, and whether Wisconsin’s redistricting plan ran counter to the principles of association.

Opponents of Wisconsin’s electoral maps point to the so-called “efficiency gap,” steeped in the notion that one party’s voters are wasting more of their votes than others because they continue to lose in partisan gerrymandered districts.

Chief Justice John Roberts would have none of it. He called the efficiency gap idea “sociological gobbledygook.” Justice Samuel Alito Jr. agreed, blasting the battle between social scientists that such a standard would create.

New Justice Neil Gorsuch added a little spice to his apparent rejection of the left’s arguments and its proposition that many tests or standards could be applied in determining partisan gerrymandering.

Tseytlin, who was grilled by Kennedy and other members of the court, said opponents of the redistricting plan have laid out shifting arguments in the case in the face of failed positions.