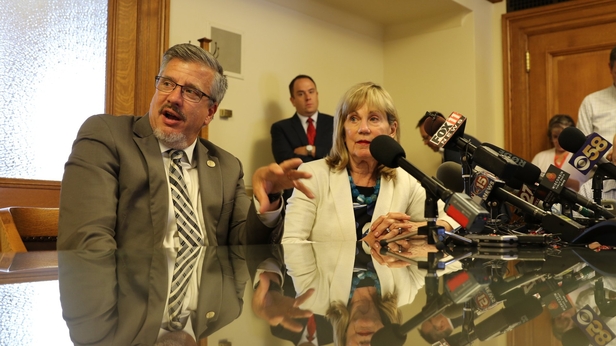 [Madison, Wis…] The Joint Committee on Finance finally approved a transportation budget Tuesday night – and by doing so removed the biggest roadblock in passing the 2017-2019 Wisconsin State Budget.

The final product to come out of JFC closely resembles Gov. Scott Walker’s proposed transportation budget that he presented almost seven months ago. It also satisfies his requirement of not raising the gas tax or registration fee on gas vehicles.

However, JFC’s version creates a new $100 fee for electric vehicles and a $75 fee for hybrids. Owners of electric and hybrid vehicles would pay this new fee on top of the existing $75 registration fee. Walker recently said he was okay with such an electric/hybrid fee because these vehicles use public roads but don’t contribute enough to the road fund. This item is expected to raise $8.4 million over the biennium.

One of the most contentious issues throughout the transportation debate was over bonding. Walker’s original budget included $500 million in new road bonds. Assembly Republicans have generally been opposed to any new bonding without additional revenue increases or new revenue sources to help pay for it. They have argued that the state borrows too much for roads and that we should adopt a pay-as-you-go approach to transportation funding. In the end, JFC approved $402 million in new bonds, approximately 18% less than Walker. That is the lowest amount of new road bonding since the 2003-05 budget and the $252 million for Foxconn road building is included in the $410 million total.

Rep. Shankland insists “people all over” asking Legislature to “Just fix it (WI roads)” Like these people? https://t.co/vBS1UdkoWl #wiright

While JFC approved new funding for the I-94 North-South Corridor Project, the committee decided to hit the brakes on two other important projects in southeastern Wisconsin. JFC included language in their motion that specifically prohibits any sort of funding for the north leg of the Milwaukee Zoo Interchange project during this 2017-2019 biennium. The north leg is the unfinished part of the massive Zoo Interchange project that has been under construction for years. The provision also explicitly prohibits the Department of Transportation from using savings from contract negotiations to fund the north leg of the Zoo project. The Finance Committee also did not appropriate any money for the I-94 East-West expansion between the Zoo and Marquette Interchanges, effectively preventing any work on this critically important project for at least two years.

JFC Co-Chair Rep. John Nygren (R-Marinette) explained to reporters, “This budget shows you’re not going to make a commitment that you can’t pay for, and that’s the bottom line. If we don’t have the resources to fund the east-west or the north leg of the Zoo, then we shouldn’t be making that commitment.”

There are also several items in the JFC transportation motion that attempt to satisfy the need of fiscal conservatives to find taxpayer savings from within the DOT. One provision included in the omnibus motion requires DOT to eliminate 200 positions over the biennium, many of them currently vacant according to the Legislative Fiscal Bureau, saving $13 million annually. Another provision would require the department to sell $4 million worth of land it holds and transfer the proceeds directly to the transportation fund.

Walker’s proposal to eliminate the prevailing wage in state building and highway projects made it into the final version, a big victory for fiscal conservatives in the Senate. The effective date of this provision was moved back to September 1, 2018, however. For an idea of the potential taxpayer savings, conservatives point to a study released by the nonpartisan Wisconsin Taxpayers Alliance that found state and local governments could have saved as much as $300 million on vertical construction projects in 2014 if there was no prevailing wage requirement. Remember, too, the story we did on the water towers in the village of Grafton.

JFC also approved language that addresses a concern expressed by Sen. Duey Stroebel (R-Saukville) and was the subject of a story that we wrote about earlier this year. It has to do with the rebuilding of Janesville Road in Waukesha County. The 1.2 mile stretch of Janesville Road that was rebuilt with local funds cost approximately $6 million to complete while the 1.2 mile stretch of Janesville Road, the exact same road, that was rebuilt with federal dollars cost almost $8 million. While Sen. Stroebel wants to direct the DOT to save money on local projects by swapping Surface Transportation Program (STP) funds with federal funds from the state highway program, the language in the transportation motion only requires the DOT to study this idea of federal/state aid swap and report back to the Finance Committee. Then there’s “Replace-In-Kind” alternatives for highway development plans that require the DOT to show what the project would cost without bike lanes, extra vehicle lanes, and by making other design changes. An item sure to be noticed in Mayor Barrett’s office is a provision that would prevent the City of Milwaukee from shifting expenses from its streetcar onto TIFs, the county, or the state.

All property owners in the state have scored an important win in the Finance motion, while certain property owners appear to have lost some ground. The motion contains language that prohibits local governments from condemning private property in order to build recreational trails, pedestrian ways, or bike paths. The motion also includes language that requires a railroad to go through extra steps before it acquires private land through the condemnation process.

The setback has to do with the regulation of quarries. The Joint Finance transportation motion has over five pages on the local regulation of quarries. While we are still researching and analyzing the language, it appears to change substantially the way local units of government can regulate these businesses. As we find out more about this provision, we will immediately pass it along to you.

“Repeal of prevailing wage will be a huge victory for taxpayers in Wisconsin” – Sen. @LeahVukmir , co-author of bill #wiright #wibudget

Not everything in the JFC motion will likely get the governor’s approval. The Legislature is trying to limit the governor’s influence on the Transportation Projects Commission (TPC). This commission is responsible for recommending which major and mega highway projects should be built, so there’s a lot at stake. The JFC plan takes away one of the governor’s appointments and creates four new public positions appointed by the Legislature. The motion also creates three new independent staff positions to support the TPC, thereby creating a whole new bureaucracy that will only grow with time.

“Have you ever put a transportation budget forward? You have not.” – @RepKooyenga to @GordonHintz A note on criticism w/o action #wiright

The approval of a transportation budget by Joint Finance does not mean the transportation funding debate has been put to rest for good. Nygren told reporters, “We’re not going to come up with a long term solution for transportation, that’s disappointing. But you live to fight another day. You don’t get everything you want.”

The conversation is far from over and I’m looking forward to continuing to advocate for a dedicated and sustainable solution. #wibudget