The most significant change is an increase in the income limit for the Wisconsin Parental Choice Program, also known as the statewide choice program. Families of four earning just shy of $54,000 annually – 220 percent of the federal poverty level (FPL) – will be eligible. Until now, the statewide limit had been 185 percent of FPL, or nearly $45,000 for a family of four. 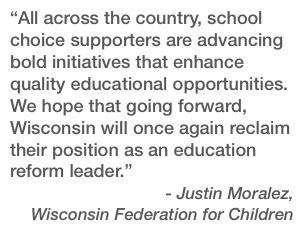 While the move to 220 percent is important, the statewide choice program will still be different than the other choice programs. Participation in the Racine and Milwaukee parental choice programs is limited to 300 percent of FPL, or nearly $73,000 annually. School choice advocates had hoped to increase the statewide income limits up to the same level, but fell short of that goal.

“The increase to the income limit for the WPCP from 185 percent to 220 percent of the federal poverty level is a step in the right direction but still leaves many working class families on the outside looking in,” Jim Bender, President of School Choice Wisconsin, said in a statement following the vote.

Ironically, the State of Illinois recently created an expansive statewide school choice program for students whose families earn up to 300 percent FPL. That program, a new tax credit scholarship for private school tuition, prioritizes students in families under 185 FPL as well as those in school districts with poor results. Students who receive the scholarship must also take the state accountability test.

As a result, Chicago will become the third biggest city in the country with access to parental choice once the program launches. The initiative will be funded by charitable donations made by individuals, who will receive a state income tax credit in exchange for their donation. Illinois’ program will expire after five years if legislators do not renew it.

As for Wisconsin’s vote, Sen. Leah Vukmir (R-Brookfield) voted for the package but said she would have preferred a bigger increase. 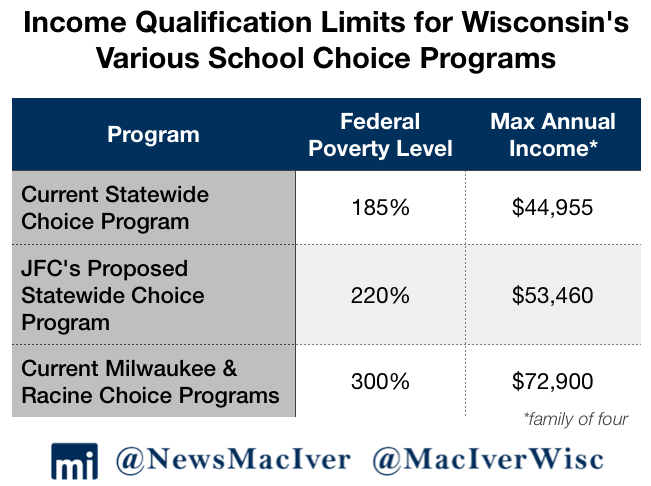 “A lot of times there are things in an omnibus that you like, and there are things that you don’t like,” Vukmir said. “And while I’m pleased that we’ve increased the participation in the school choice program from 185 percent to 220 percent of federal poverty level, everyone knows that I would’ve preferred a greater expansion, both in terms of that as well as the removal of the [pupil participation] cap.”

The cap that Vukmir referred to is the number of students that may enroll in the statewide parental choice program. Currently, no more than 2 percent of the pupils in any public school district may participate in the statewide program. However, neither the Milwaukee nor Racine programs have enrollment caps.

If more than 2 percent of pupils in a school district apply, DPI conducts a random lottery for admission and places the rest of the students on a waiting list.

The Finance Committee did make one important change to how students on the waiting list are treated. Right now, students apply for the statewide program only when entering kindergarten, 1st, or 9th grade. If a child is refused admission and placed on a waiting list but a spot opens up after he or she has graduated to the next grade, they are out of luck. They are denied entry into the program. With a limited number of openings during kindergarten and 1st grade, many students often miss the crucial 1st grade entry point – locking them out of the program until high school.

Under the budget passed by JFC, students who are placed on a waiting list and later admitted will be able to enter the program regardless of grade level. An estimated 100 more students will be able to participate as a result of those changes.

Paul Gnan, Executive Director of Sheboygan Lutheran High School, thanked the legislature for the changes, saying he knows of at least five families who have missed out on participating in the program because of the waiting list rule alone. As for the increase in the income limits, Gnan said he thinks it will “open up the eyes” of some people who will see that “it’s kind of a low-middle income program, and a lot more families are going to be able to take a choice, and make the best educational choice for their child.”

“We have 160 to 170 students in our school. I’d say last year we had 20 families that were just over the threshold and what this does, is now it opens it up,” Gnan said. “Every one of my teachers will be eligible.”

Another change adopted by the Finance Committee will allow students, who are new to Wisconsin, to apply for the statewide parental choice program. Currently, applicants must have attended a public school within Wisconsin the prior year in order to be eligible.

JFC’s budget also eliminated a provision that required school choice participants to annually verify their family’s income with DPI. As long as the student participated in the Milwaukee, Racine, or statewide programs the prior year, the family’s income will no longer need to be verified. Another provision will allow private school students to enter a school choice program regardless of grade level, as long as that student meets income and other requirements. 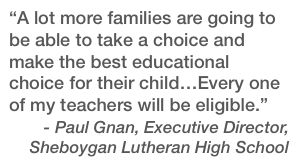 Gnan said his school was still reviewing those changes and others, but said that he thinks they will be very helpful for students.

“I’m just very grateful to the legislators for listening to us and at least coming partway,” Gnan said, striking a note of compromise. “I think it’s going to be really good.”

Perhaps even more significantly, JFC’s budget allows independent charter schools to be created statewide. Current law limits the locations in which authorizers can contract for a new school to Madison and Milwaukee.

One pro-charter group, the National Alliance for Public Charter Schools, celebrated the provision in a statement, highlighting that “the independent charter schools in Milwaukee are the highest performing sector of public schools in the city.”

Another program – often called the state’s most popular form of school choice – will see a funding increase. Public school open enrollment allows over 55,000 students across the state to attend other public school districts within Wisconsin. The program is open to students in kindergarten through 12th grade.

Under JFC’s budget plan, schools will receive an increase of $100 every year from 2017 through 2020 for every non-special education open enrollment pupil. 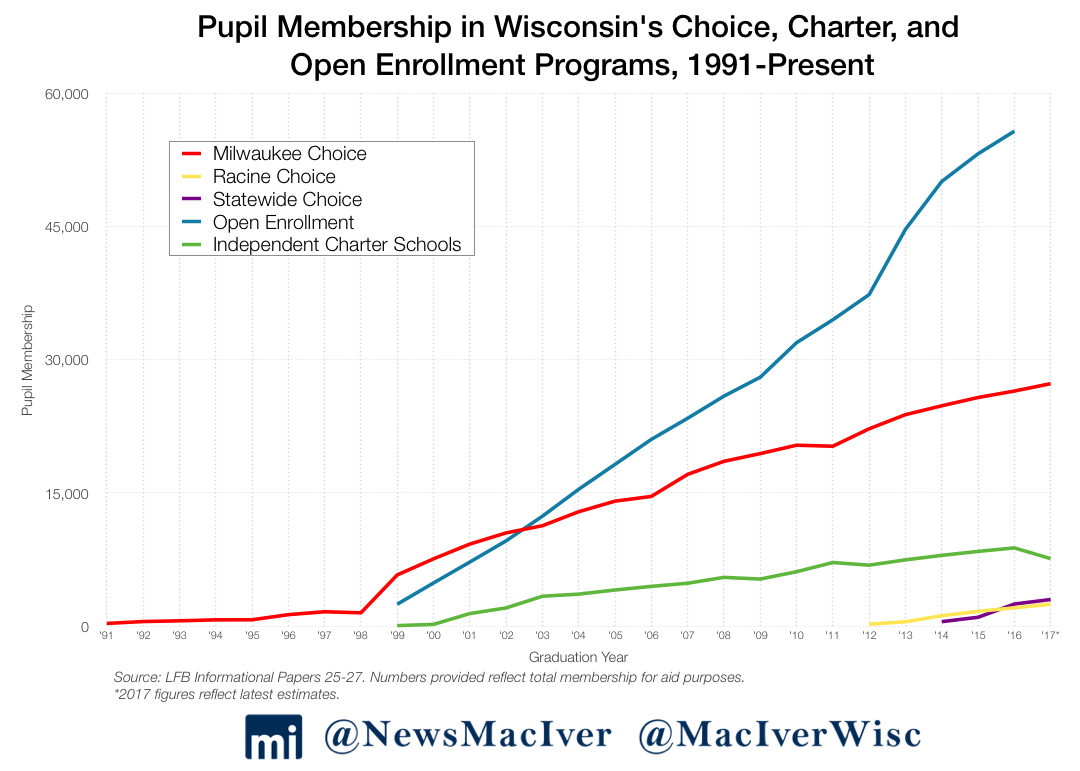 Even despite the reimbursement increase, funding for open enrollment falls several thousand dollars short of average per pupil costs in Wisconsin. New school districts do not receive as much in the per-pupil aid transfer as they do for regular in-district students. Districts that “lose” students to other places as a result of open enrollment keep the difference in funding.

More than 41,000 applications for the 2015-16 open enrollment program were submitted, according to a December 2016 DPI report. Students can submit up to three applications.

The popular program began in 1998. With no set cap on student participation, public school open enrollment has far outpaced other forms of school choice in Wisconsin.

The finance committee has yet to vote on two programs related to education: the special needs scholarship program and the school levy tax credit. Both votes are expected to take place in the coming days, as the committee wraps up its work on the 2017-19 budget. As always, the MacIver Institute will be there, watching out for any final surprises to the taxpayers. Follow along the debate at @MacIverWisc and @NewsMacIver.