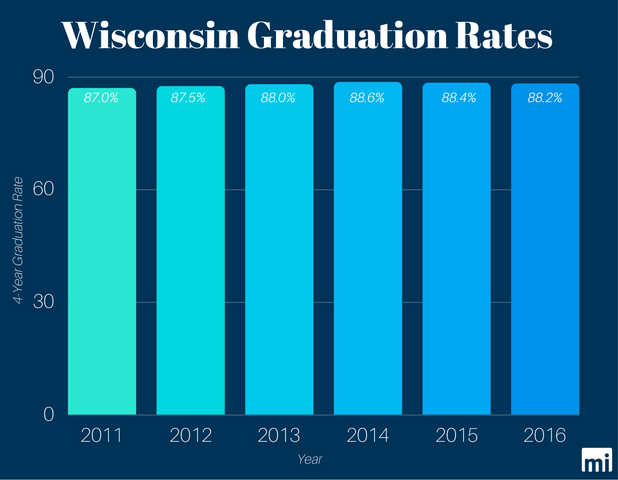 [Madison, Wis…] Wisconsin’s four-year high school graduation rate fell slightly in 2016 compared to the year prior, according to a new data release by the Department of Public Instruction (DPI). Overall, 88.2 percent of students graduated in four years, down from 88.4 percent in 2015.

The data came with massive “asterisks” in the form of data errata, or corrections, for 19 school districts. According to a DPI letter, the data “contains known errors identified after the collection closed, which are not corrected for the certified report.” As a result, data for certain districts was removed from statewide totals and in some cases does not match statewide numbers.

Correct graduation rates will be included in high school report cards, which will be released this fall.

Compared to five years prior, all racial and ethnic groups have improved their graduation rates, but Hispanic and Latino students posted the greatest overall improvements.

Students at Milwaukee Public Schools, the state’s largest and most troubled school district, improved their graduation rate by 0.5 percent over the previous year, with 59.7 percent of MPS students graduating in four years. Over the last five years, the graduation rate at MPS has trended generally downwards and is still nearly 30 points below the statewide average. In 2012, 61.8 percent of MPS students graduated in four years.

Unlike in past years, State Superintendent Tony Evers did not release a public statement about the data release. The data was released to the public several months later than its usual spring release.