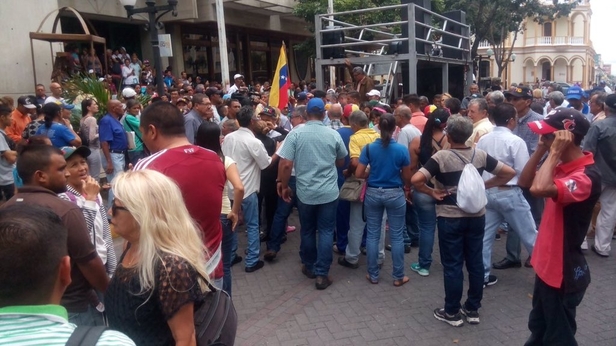 A Venezuelan student now studying in America is speaking out against the University of Wisconsin-Madison’s forthcoming award to Tariq Ali, a supporter of socialist dictatorships including those of Hugo Chavez and Nicolas Maduro.

“It is a shame really,” Jorge Jraissati, a student at Florida Atlantic University, said. Jraissati came to America when he was 18 to flee his home country’s violence. “It is a shame because universities should protect free speech and should protect those people who believe in freedom, not those who live in oppression. I’m ashamed that institutions like [the UW] give awards to people who defend a dictatorship.”

After the recent escalation of violence and deadly protests, we spoke to Jorge for a more in-depth look at the crisis in Venezuela, his personal experiences with the regime, and his hopes for the future of his homeland. 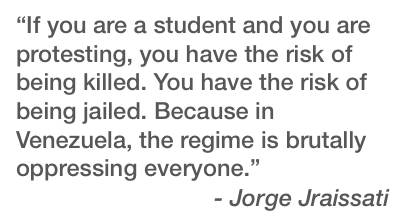 Jraissati became involved in politics at a young age,
inspired to help those afflicted with poverty in his country. He won a leadership position with Voluntad Popular – the opposition party that President Nicolas Maduro has repeatedly tried to disband because he views it as the “military arm” of a U.S. plot to remove him from power. After receiving personal threats, his parents urged him to move somewhere safer to begin his studies.

He expressed his deep disappointment that the University of Wisconsin is giving an award to someone who supports the brutal Venezuelan dictatorship.

Some news outlets like teleSUR claim that Western media is blowing the situation in Venezuela out of proportion, but Jorge argues they’re not capturing the true horrors.

“The situation in Venezuela is even worse than the media portrays. In Venezuela there’s a humanitarian crisis. And that’s something that people need to understand – that the media is not even close to what is happening in Venezuela.”

For the launch of teleSUR English in 2014, Ali interviewed Maduro. It was Ali’s first time in Caracas since Chavez died. In the interview, Ali states that “there’s a feeling of sadness but also a feeling of happiness that there’s continuity going on,” referring to Maduro’s ability to carry on the Bolivarian revolution that Chavez proliferated. Jorge presents a stark contrast to Maduro’s rhetoric.

Jraissati says he “understood how many people believed in Chavez because Chavez told them that he would bring prosperity,” but that he draws a line in the sand for people who continue to support today’s dictatorial regime. “Whoever supports a regime in 2017, with all the evidence that we have in human rights violations and all the brutal repression, whoever supports Maduro right now should be ashamed because he has blood on his hands.”

In the future, Jraissati aspires to help Venezuela rise from the shambles of socialism. “I came [to the United States], now I study economics and business management. I’m doing it because I want to prepare myself, I want to learn as much as I can. I want to earn my master’s and then come back to my country to help rebuild my country.”

For now, Venezuelans like Jorge won’t stop fighting for their freedom. Everything is on the line, Jorge says, and it’s up to the people on the ground to be “fearless. To fight on the streets without fear of being killed or without fear of being jailed, because we know that the most important thing that we can do is to reconquer our democracy.”

Pictured: Protesters gather on July 28 in Barquisimeto, Venezuela, to protest against the jailing of their democratically-elected mayor. Photo by Jorge Jraissati.