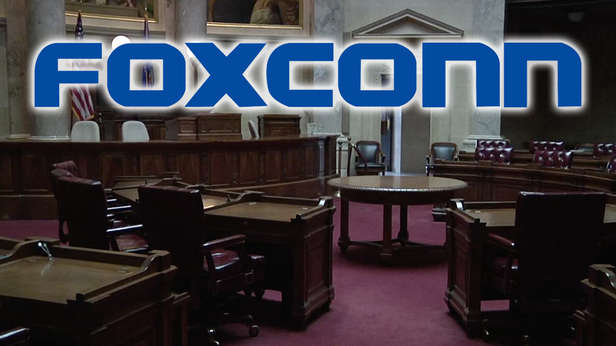 [Madison, Wis…] There appears to be a communication gap – again – between Assembly Republicans and their GOP brethren in the Senate.

Senate Majority Leader Scott Fitzgerald expressed his disappointment Wednesday that the Senate has not been contacted about the changes to an incentives bill for Taiwanese tech titan Foxconn Technology Group.

With an aggressive timeline in place, Fitzgerald hoped to be “looped in” about the bill’s dozen or so amendments proposed by this point, Myranda Tanck, communications director for the majority leader, told MacIver News Service.

The Assembly Committee on Jobs and the Economy is overseeing the bill, which includes $3 billion in tax credits and other sweeteners in return for Foxconn coming through on its pledge to build a $10 billion LCD panel manufacturing campus in southeastern Wisconsin. Foxconn says it plans to create 13,000 jobs and infuse billions of dollars into the Badger State economy with its first foray into manufacturing in North America.

Last week, the committee held a nearly 11-hour public hearing, which contributed to at least 50 amendment ideas, according to state Rep. Adam Neylon (R-Pewaukee), chairman of the committee.

Neylon said the Committee on Jobs and the Economy expects to vote on the bill and its amendments either Monday or Tuesday next week. If approved, the bill could go to the Assembly floor later in the week, Neylon said.

As to Fitzgerald’s concerns, Neylon said his committee has had its hands full just trying to get this bill through, “let alone thinking about the entire Assembly and the Senate.”

“They certainly play an important role in all of this, and there will be ample time for them this month to work on their side of the equation,” he said.

Last month’s memorandum of understanding signed by Gov. Scott Walker and Terry Gou, Foxconn founder and chairman, stipulates the incentives package must be completed by the end of September.

The Senate majority leader said he believed that timeline was pretty fast, with so much that needs to be completed on an economic development project of unprecedented scale. Senate leadership plan to open their version of the bill in the Joint Finance Committee.

While members of the Committee on Jobs and the Economy have expressed their interest and willingness to work with Assembly Democrats on amendments, they haven’t extended the same courtesy to fellow Republicans in the Senate, according to legislative insiders.

“Sen. Fitzgerald said from the beginning that he hoped this would be a bipartisan piece of legislation when it was brought to the Legislature,” Tanck said. “He thinks this (lack of cooperation) could delay passage of the bill if the Senate is unfamiliar with what’s in the amendments of this bill.”

Senate Republicans plan to caucus Thursday. Tanck said executives from the Wisconsin Economic Development Corp., the agency charged with administering the incentives, will be in attendance to go over the details.

Fitzgerald reiterated to reporters again Wednesday that the Senate’s priority is to finish the budget, which is now nearly six weeks late.

He’s concerned about a Legislative Fiscal Bureau report issued this week that shows it could take about 25 years for the state to break even on the Foxconn deal.

“The Fiscal Bureau did indicate it hasn’t dealt with something of this magnitude,” Tanck said of the Foxconn project. “But the majority leader certainly wants to approach this proposal with the due diligence that’s required.”

The Fiscal Bureau memo cautions that its analysis focuses on the impact of the Foxconn project on the state treasury. It does not take into account the other “benefits to the state’s economy and residents.”

Neylon said the Legislature is capable of working simultaneously on the Foxconn proposal and the state budget.

“It makes sense to want the budget completed, but it’s important to do our due diligence to have (the Foxconn package) done by the end of September,” he said. “It’s important to live up to those terms of the negotiations.”