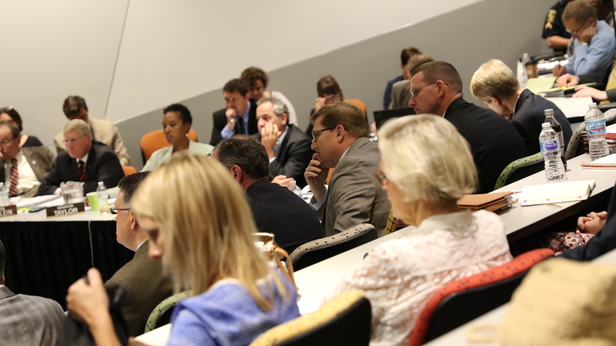 [Sturtevant, Wis…] The Joint Committee on Finance hit the road on Tuesday, holding a public hearing on Foxconn at Gateway Technical College in Sturtevant, Wisconsin. The budget committee met for five and a half hours and heard testimony from a range of people, from state and local officials to concerned citizens.

As the MacIver News Service reported last week, the full Assembly passed a Foxconn incentives package last Thursday. The Senate opted to refer the legislation to the powerful budget committee.

The exact location of the potential Foxconn plant has yet to be released, but it will be somewhere in the Racine and Kenosha area. At the last public hearing, held by the Assembly Committee on Jobs and the Economy, numerous individuals asked for a hearing in Southeast Wisconsin, where Foxconn is set to break ground. On Tuesday, Joint Finance delivered.

JFC #Foxconn hearing is underway in Racine area. MacIver is here for the duration, so stay tuned. #wiright #wipolitics pic.twitter.com/Xvfr8NTqel

Members of the Walker administration, including Secretary of Administration Scott Neitzel and Wisconsin Economic Development Corporation Secretary and CEO Mark Hogan, testified first, speaking about the enormous opportunity Foxconn represents for the state of Wisconsin.

“With this investment by Foxconn, two of the top five technology companies in the world will have located and invested in southeastern Wisconsin since 2013,” Neitzel testified, referring to Amazon’s Kenosha facility, which opened in 2015. “The groundwork was laid for our team to be successful.”

Several representatives also testified in front of the committee, including Rep. Tod Ohnstad (D-Kenosha) and Rep. Cory Mason (D-Racine). Both testimonies focused on the incredible potential for jobs in Southeast Wisconsin, while making sure to highlight their concerns about the incentive package’s waiver of several environmental rules for Foxconn and WEDC’s record tracking companies that have received taxpayer-backed loans.

Ohnstad, the ranking Democrat on the Assembly Committee on Jobs and the Economy, voted against the bill in committee but voted for it when it reached the full Assembly. Mason, who is running for mayor of Racine, has been vocal both about his interest in the project and about his hesitations. The only other Assembly Democrat to vote for the bill was Assembly Minority Leader Rep. Peter Barca (D-Kenosha), who was present at the hearing but did not testify.

At the hearing, Hogan confirmed that the median salary at the sprawling Foxconn campus will be close to $54,000. That was in response to the notion that the average salary figure touted by the administration – also $54,000 – could be significantly inflated by a few high salaries.

Hogan also pushed back on the idea that LCD screens could become obsolete before the state’s investment is realized, a talking point opponents have been hammering for weeks.

“This company has 55,000 patents,” Hogan said. “This is a company where research and development is part of their DNA.”

Proponents describe the bill as a “pay-as-you-grow” incentives package.

In a Break-Even Analysis, the review projects the state wouldn’t begin making money on the Foxconn deal until 2042. However, the very same memo notes that such projections must be viewed with caution.

“(A)ny cash-flow analysis that covers a period of nearly 30 years must be considered highly speculative, especially for a manufacturing facility and equipment that may have a limited useful life,” according to the memo.

Adding to the LFB’s note of caution about their analysis was a report released on Monday commissioned by the Wisconsin Technology Council that found for every $1 of public investment, the Foxconn project could generate an additional $3.90 for Wisconsin’s economy.

At least one JFC member questioned the notion that Foxconn should be treated differently than businesses already in Wisconsin. Sen. Sheila Harsdorf (R-River Falls) asked the administration to justify the inclusion of a sales tax exemption for Foxconn, saying “I don’t believe most businesses get that.”

For the administration, it came down to the massive opportunity Foxconn presents for the entire state.

“They’re not going to spend the dollars unless they’re here,” Hogan said, noting that the Bucks Arena also received a sales tax exemption. Asked why the deal is different than any other, his answer was decisive.

“Foxconn is taking an industry segment that does not exist in the United States, and they’re taking it from Asia, and they’re moving it to Wisconsin.”