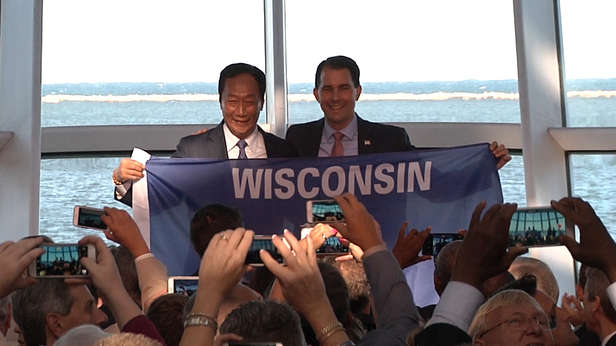 [Madison, Wis…] – When DNR Deputy Secretary Kurt Thiede told a legislative committee last week that Taiwanese tech giant Foxconn would be able to move more efficiently through the state’s environmental regulatory process, you could forgive businesses across Wisconsin for thinking, “That sounds good. I’ll have what Foxconn is having.”

Thiede told the Assembly Committee on Jobs and the Economy that a proposed $3 billion state incentives package would streamline the paperwork pileup, reducing the usual duplicative red tape.

“From a timeline perspective, we still believe the project can go forward expeditiously and have the regulatory framework in place to make sure the environment is protected,” the Department of Natural Resources official said.

But what about all the other businesses (including 440,000 small businesses) currently in Wisconsin that don’t or won’t get the Foxconn treatment when it comes to government regulation?

Scott Manley, Vice President of Government Relations for Wisconsin Manufacturers and Commerce, said the Foxconn effect could provide a “proof of concept” for greater regulatory reform.

“I think one of the things we have an opportunity to do with this project is to demonstrate to the people of Wisconsin that the streamlining reforms in this bill, when applied to a project of the magnitude and scope as the Foxconn project, is that we will essentially do a proof of concept, that, yes, we can streamline things and still have great environmental outcomes,” Manley told MacIver News Service this week on the Dan O’Donnell Show on NewsTalk 1130 WISN in Milwaukee.

“I think it’s a tremendous opportunity to demonstrate that we can make changes to the old way of doing things, the old command-and-control, government-centric way of regulating businesses, and once we’ve got that proof of concept established, I think policymakers would be much more likely to want to migrate that to all businesses as a whole,” he added.

Manley and others have described as “modest” the proposed changes to DNR procedures in the Foxconn incentives legislation now in the Assembly.

The legislation exempts the Foxconn project from some DNR permitting requirements, such as wetlands review, and lifts the usual demand for environmental impact statements that has slowed previous larger-scale development projects to a crawl. Supporters of the proposed incentives package point out that the wetlands exemption, for instance, calls for more rigorous replacement standards.

State Rep. Adam Neylon (R-Pewaukee), chairman of the Committee on Jobs and the Economy, said not every economic development project is alike – or equal for that matter.

“Every project is different and requires a different approach,” he said, turning to a sports analogy to illustrate his point.

“Putting money into venture capital or money into investing in a start-up or entrepreneurs is a lot like a draft where you select prospects and you hope one comes to fruition,” Neylon said.

Foxconn, the lawmaker said, is an “MVP all-star” that wants to come into Wisconsin and make an immediate and long-lasting difference on the state’s economy.

Still, Neylon asserts the state should be looking at how to help other companies in Wisconsin alleviate regulatory burdens. Bills like the “Regulations from the Executive In Need of Scrutiny,” or REINS, Act, which Walker signed into law Wednesday, are aimed at bringing regulatory relief to all business, Neylon said.

Walker said one of his top priorities is making sure government services are “effective, efficient, and accountable.”

“The Wisconsin REINS Act takes away power from unelected bureaucrats and makes sure state agencies are truly held accountable to our taxpayers. More importantly, it allows our taxpayers the opportunity to weigh in earlier in the rule-making process,” the governor said.

Also on Tuesday, the Mercatus Center at George Mason University released a new report analyzing the Wisconsin Administrative Code. The report, “A Snapshot of Wisconsin Regulation in 2017,” finds the Code contains nearly 160,000 total regulatory restrictions and 12 million words that impact the state’s economy. With more than 55,000 regulations alone, the Department of Natural Resources is the most burdensome regulatory agency in the state.