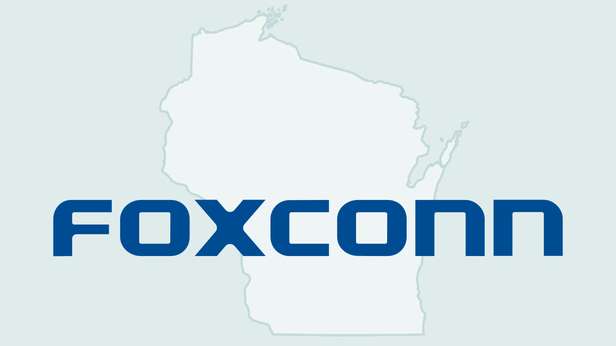 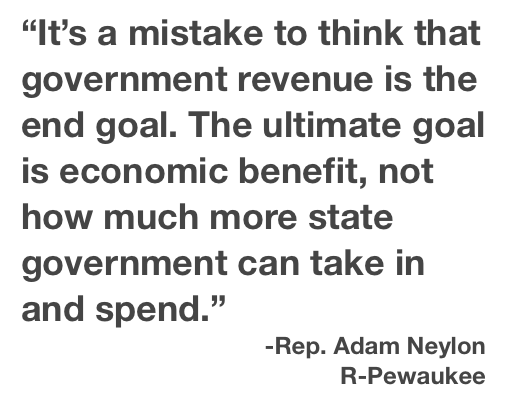 But the LFB acknowledges it has no way of accounting for all the potential positive economic impacts the proposed Foxconn manufacturing campus could bring.

The analysis, released Tuesday, was among state agency memos breaking down the fiscal impact of the proposed $3 billion in incentives tied to the estimated $10 billion project.

Foxconn would receive a total of $2.9 billion in tax credits over the 15-year lifetime of a specially created Electronics and Information Technology Manufacturing Zone (EITM) – if the world’s largest manufacturer of liquid-crystal display panels comes through on constructing its first North American plant in Wisconsin and fills all of the proposed 13,000 jobs, at an average annual salary of $53,875. 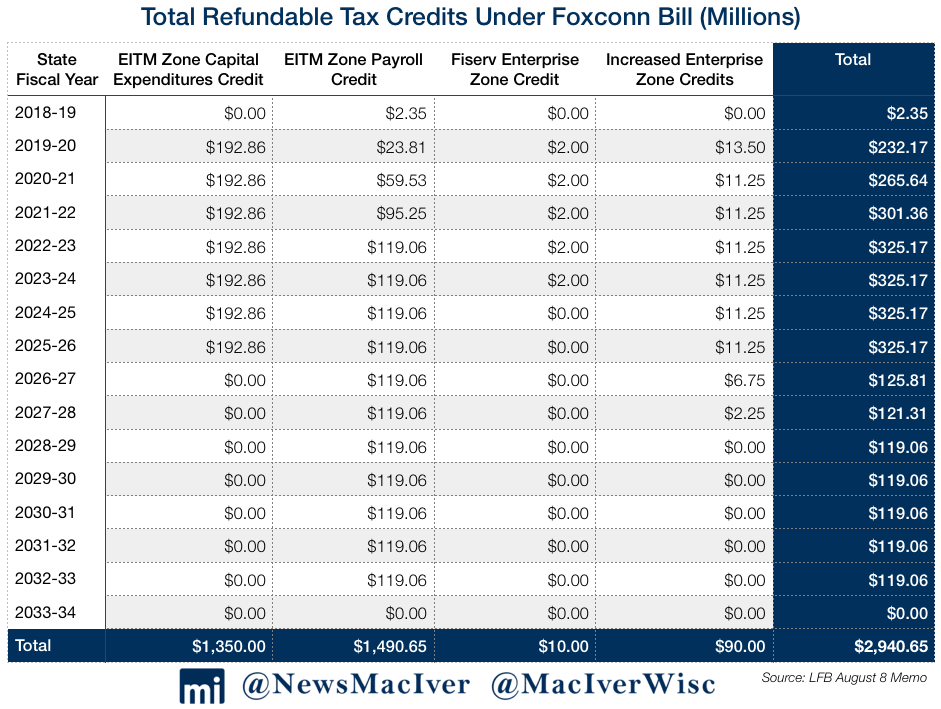 An incentives package bill introduced last week in the Assembly provides Foxconn with refundable tax credits for each job it creates paying between $30,000 and $100,000. The credit would be based on 17 percent of the company’s payroll in the EITM zone, for a total of up to $1.5 billion in tax benefits.

As the LFB points out, Foxconn plans to have about 1,000 permanent positions in Wisconsin this year (at an estimated payroll of $13.8 million), with plans to increase its workforce to 13,000 positions and a total annual payroll of $700 million by the beginning of 2021.

And Foxconn would be eligible for a refundable credit of up to 15 percent of its capital expenditures in the zone. Aggregate payments for the capital tax refund could not top $1.35 billion. Credits would be paid from the state’s General Purpose Revenue appropriations.

State capital tax credit payments to Foxconn would total $192.9 million annually in fiscal years 2020 through 2026, according to LFB.

“The company would receive the full amount of credit, even if it has little or no Wisconsin income or franchise tax liability,” the LFB analysis states.

The state Department of Administration projects the “cost” of the refundable state tax credits under the incentives package would exceed the potential increased tax revenue until fiscal year 2032, when the last EITM payroll credit is paid.

But as project supporters note, the tax benefits wouldn’t exist without Foxconn building and hiring in Wisconsin. They call it a “pay-as-you-grow” economic development proposal.

In that vein, Foxconn and its contractors would save $139 million through a sales and use tax exemption, according to the LFB report.

“However, since it is highly unlikely that Foxconn would locate in the state without the incentives provided under the bill, this amount should not be viewed as a state revenue loss,” LFB notes.

In a Break-Even Analysis, the DOA projects the state wouldn’t begin making money on the Foxconn deal until 2042. The Fiscal Bureau notes such a timeline must be viewed cautiously. 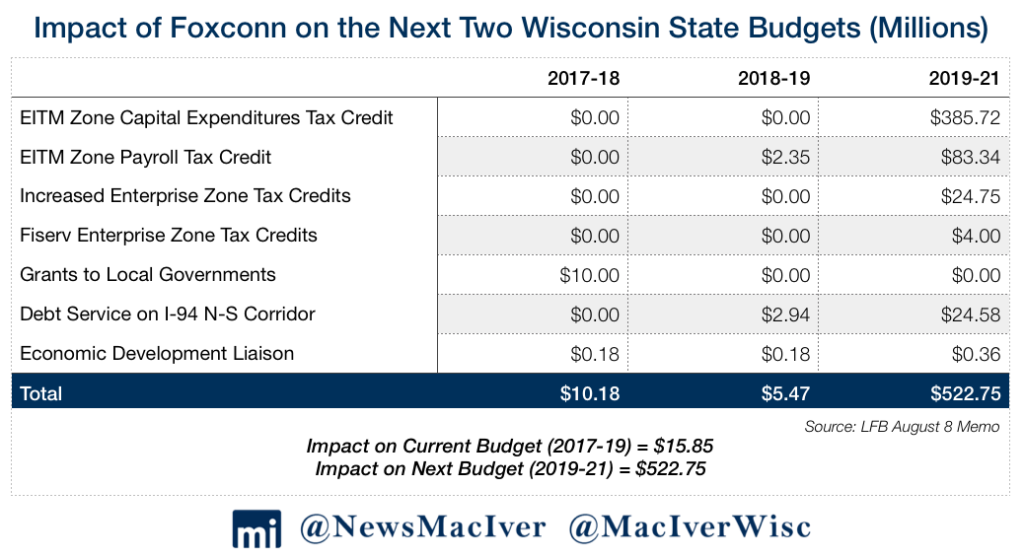 Democrats critical of the bill, particularly those mulling a run for governor, fired out press releases insisting the LFB analysis shows that the incentives package is nothing more than a taxpayer giveaway to a company that posted $136 billion in revenue in 2015.

“As today’s memo shows, Wisconsin taxpayers are assuming 100% of the risk of this proposal, and we are smart to be skeptical of the deal and ask questions,” state Rep. Gordon Hintz (D-Oshkosh), on a growing list of potential Democrat candidates for governor, said Tuesday.

The LFB notes #Foxconn incentives would yield $6.70 of private spending for each $1 of public money. Bucks Arena yields $3.#wipolitics pic.twitter.com/pfzJf4lXxh

Then there are the trades jobs needed to construct a dozen or more buildings on the proposed 20 million-square-foot manufacturing footpad. DOA estimates peg an average annual employment of some 10,200 construction workers and equipment suppliers earning average total compensation of $59,600 during the four-year construction period. Total income is estimated at $2.4 billion.

Another 6,000 indirect and related jobs are estimated to be created during construction, with average compensation of $49,900, according the Fiscal Bureau report. The total increased state tax revenue – primarily income and sales taxes – associated with the construction period is estimated at nearly $190 million.

DOA estimates a total of 22,000 indirect jobs and those secondary positions (suppliers) supporting Foxconn’s operations will be created, with combined annual wages of $1.1 billion per year beginning in 2021.

“The way to judge this project is not by government revenues, not by government figures. It’s what it means to our overall economy,” said state Rep. Adam Neylon (R-Pewaukee), chairman of the Assembly’s Jobs and Economy committee. The committee held a hearing on the bill last week.

Foxconn “will grow our GDP, it will have a tremendous impact on our economic activity in the state. A lot of people will benefit because of this incentives package. We have a situation where we will be attracting talent instead of losing it,” Neylon added. “It’s a mistake to think that government revenue is the end goal. The ultimate goal is economic benefit, not how much more state government can take in and spend.”

Neylon said his committee still plans to vote Thursday on the bill, with amendments. The lawmaker says he has received at least 50 amendment ideas on the legislation since the bill was introduced last Tuesday, from technical matters to more significant issues such wetland relocation.

“I think reading these new fiscal analyses reaffirms a lot of what we were told during the public hearing and what we were led to believe,” Neylon said. “It also exposes some areas we are working on to clean up or clarify or make sure there are safety nets in place within the language of the legislation.”