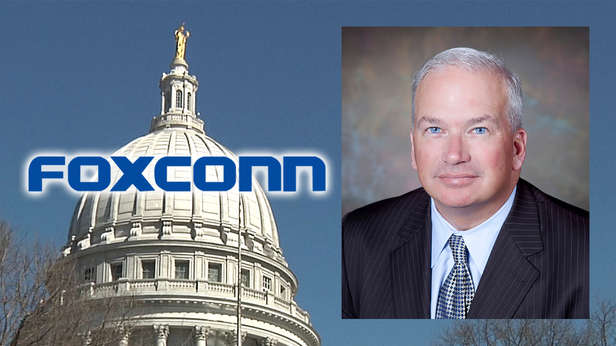 [Madison, Wis…] While supportive in principle of the proposed $3 billion Foxconn incentives package, Senate Majority Leader Scott Fitzgerald has no intention of Pelosi-ing the process.

It was U.S. Rep. Nancy Pelosi (D-Calif.) who famously – or infamously – said in 2010 that Congress needed to “pass the bill [Obamacare] so you can find out what’s in it…”

Pelosi was criticized for not being as deliberative as many would have liked. Fitzgerald has no intention of making that mistake.

But could the Senate’s usual sluggish pace cost Wisconsin what has been referred to as a “once-in-a-century” economic development deal – a project expected to create a city of tech manufacturing, employing 13,000 people within the next five years and contributing billions of dollars to the Badger State economy?

Fitzgerald doesn’t think so. As of Thursday morning, the senator said he didn’t have the votes to pass the bill. But then again, Fitzgerald said, he hasn’t seen the dozen Assembly amendments now tied to the incentives package.

“If there’s one thing I’ve learned how to do in the 10 years I have been Republican leader in that caucus is to be able to count noses,” he said, adding that not having the votes now doesn’t mean that the bill ultimately won’t pass.

“I do think it will pass, in one form or another, and I think the project will move forward. But I have not sat down individually or even as a caucus until today to say, ‘What do you guys think about this? Where are you at?'”

Republican senators are expected to caucus this afternoon. They will receive an overview on the Foxconn legislation and the potential impact of the project from the heads of the state Department of Administration and the Wisconsin Economic Development Corp., Fitzgerald said.

The Senate has been left out of the loop on key elements of Foxconn, he reiterated.

“I was at a barbecue at the governor’s mansion approximately a month ago. That was the first time I was ever even introduced to the idea of Foxconn or what Foxconn was or how this relationship exists between those that work with Foxconn and their American counterparts,” Fitzgerald said.

Assembly leaders, however, counter that the bill was introduced nine days ago, the Assembly Committee on Jobs and the Economy held a nearly 11-hour hearing on it a week ago, and the Legislative Fiscal Bureau has released a detailed report on the incentives package’s fiscal impact on the state treasury. Much is now known about the bill, they say.

But there are many more questions, Fitzgerald said.

“The thing that’s missing right now is if they [Foxconn] don’t live up to the job creation kind of on the short-term basis and hit the benchmarks moving out from there,” the majority leader said. What happens if a year from now, two years from now, nothing happens, and no jobs have been created? What happens to the investments local government and the state have made in building the infrastructure for a project slow to materialize?

“I think that’s just as big a concern as making sure taxpayers are protected and it’s kind of fuzzy as to whether or not it’s included in the bill or something negotiated between DOA and Foxconn,” Fitzgerald said.

He reiterated that finishing the state budget remains the Senate’s priority. Fitzgerald said he’s “hopeful” the Joint Finance Committee will be back in business either “late next week or early the following week.”

“We have about a three-day period that not only can we do a public hearing, not only on Foxconn, but then if we’re able to pull this together we could have the finance committee complete their work on the budget, which tees it up for both houses to take up the budget anytime after that,” he said.