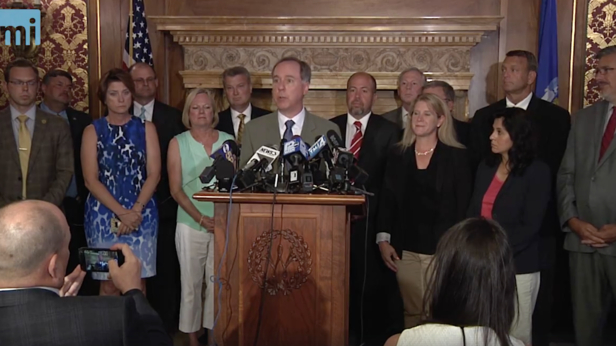 [Madison, Wisc…] Assembly Republicans say they want to act swiftly but diligently on a $3 billion incentives package for mammoth electronics manufacturer Foxconn and its plan to build a $10 billion factory in Wisconsin.

Senate Majority Leader Scott Fitzgerald, however, is calling for a more deliberative pace and a focus first on finishing the state budget – now a month late.

On Tuesday, four days after Gov. Scott Walker called the Legislature into special session to consider the unprecedented, $3 billion economic development proposal, Assembly Republicans packed the Assembly parlor for a press conference on the package and that legislative plan of action.

Assembly Speaker Robin Vos (R-Burlington) said the hope is to have the bill to the floor by the middle of the month.

But Fitzgerald and his caucus say, slow it down, folks.

“I think the members here were kind of like, ‘We need more information. We want to see something from the (Legislative) Fiscal Bureau…’ Until we have that stuff we’re just going to continue to focus on the state budget and make sure we can hopefully get the finance committee back in,” the Juneau Republican told reporters late Tuesday afternoon.

“…(L)et’s get the state budget done. Let’s give K-12 their funding numbers. Let’s make sure everyone knows we’ve got this under control before we try to jump in with both feet on Foxconn,” the senator added.

Fitzgerald said his caucus, unlike Assembly Republicans, wants to see the Foxconn bill go through the Legislature’s budget committee.

Walker has said he prefers the Foxconn bill and the budget advance on parallel tracks.

The proposal was introduced Tuesday in the Assembly Committee on Jobs and Economy, chaired by Rep. Adam Neylon. The Pewaukee Republican said the committee has scheduled a hearing for 1:30 Thursday. If all goes as planned, Neylon said, the committee could vote on the bill next Tuesday.

Assembly Majority Leader Jim Steineke says Republican leaders haven’t received any “drop dead date” on when an incentives package must be in place, but time is of the essence.

“Obviously, in a situation like this we want to make sure we follow the process, but we also want to get it done in a shorter amount of time,” he said.

Also Tuesday, the Legislative Fiscal Bureau released an 11-page policy memo on the Foxconn bill. The agency will publish a fiscal impact statement in the coming days.

Provisions of the incentives package include:

But the bill puts state taxpayers on the hook for local development costs under a “Moral Obligation Pledge.” The Legislature would, if called upon to do so, pay up to 40 percent of the principal and interest of a local government’s obligations related to the Electronics and Information Technology Manufacturing Zone.

The bill also would authorize $252.4 million in general fund-supported bonds to help pay for the Interstate-94 North-South corridor project, part of the southeast Wisconsin freeway megaprojects program. The state Department of Transportation wouldn’t be able to spend the money from the bonds unless the federal government provides matching assistance for the project.

Vos noted Walker’s previous compromise offer on bonding. The Assembly said at the time it would be willing to “use some bonding contingent on federal revenue,” Vos said.

“I think in Gov. Walker’s offer to us, he probably knew that this (Foxconn deal) was likely to happen,” Vos said. “We accepted that offer so I would say the potential to do matching federal revenues was a major motivator for our caucus, at least be open-minded to it, but I think the $250 million is probably more of a cap than a floor.”

Vos insists the incentives package has “almost zero” fiscal impact. In the grand scheme of things, he may be right. The state, if it pursues the I-94 North-South project bonding, would be looking at $2.94 million in additional debt service for 2018-19, and $10 million for a state grant program to assist local governments with infrastructure and public safety costs associated with the economic development project.

Environmentalists already are up in arms about the bill’s provisions exempting the project from Department of Natural Resources’ permitting requirements. Vos says the bill simply streamlines the permitting process. In some cases, he said, the bill strengthens environmental protections, like a provision requiring two acres of wetland replacement for every acre of wetlands disturbed.

The federal environmental process will be “as rigorous” as it is on any other project, the speaker said.

The federal regulatory approval quest has proved costly, if not deadly, for previous development projects, particularly during the previous presidential administration.

“We’re always concerned about federal overreach and what they may do to gum up the works, but we’re hopeful that under a new administration that they think along the same lines we do, that economic development is critical and we can both protect the environment and have economic development at the same time,” Steineke said. “I’m hopeful we’re living in a little different world than we had in the last eight years.”

With President Donald Trump personally involved in the Wisconsin-Foxconn project and his administration’s efforts to rein in regulators, it’s likely the kind of bureaucratic delays once so prevalent won’t dog the Foxconn development.