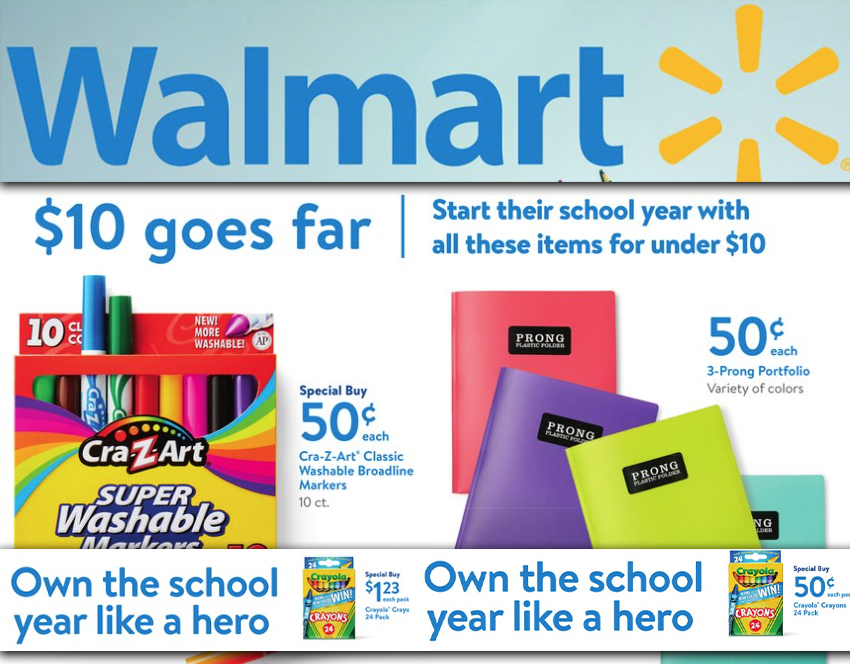 [Madison, Wis…] Back-to-school shopping in Wisconsin is once again more expensive than in neighboring states thanks to the state’s minimum markup law, which outlaws sale prices that are too low.

The minimum markup law, formally known as the Unfair Sales Act, bans retailers from selling merchandise below cost. The law, originally passed back in 1939, also requires a 9 percent price markup on specific items like alcohol, tobacco and gasoline.

Unfortunately, Wisconsinites are forced to pay for this archaic law that’s still on the books despite ongoing efforts to repeal it.

Families in Milwaukee buying basic items like composition books, markers, and crayons can expect to pay anywhere from 12 to 146 percent more than shoppers in St. Paul, Minn., Dubuque, Iowa, and Kalamazoo, Mich.

Walmart’s circulars boast that their great sale prices mean “$10 goes far,” but it goes a lot farther if you’re not shopping in Wisconsin. A basic shopping list would cost 90 percent more for a Milwaukee back-to-school shopper than in nearby states.

Shoppers in Illinois have previously enjoyed the same lower prices as other Midwestern states, as pointed out by the MacIver Institute last year. But this year, possibly thanks to the state’s recent draconian tax increases, families from Rockford to Chicago are joining Wisconsinites in paying inflated prices.

In 2015, Sen. Leah Vukmir (R-Wauwatosa) and Rep. Jim Ott (R-Mequon) introduced a bill that would have eliminated the Unfair Sales Act. Unfortunately, the repeal bill did not receive even a public hearing in either house.

Another effort earlier this year by Rep. Dale Kooyenga (R-Brookfield) to reduce the minimum markup as part of a transportation funding package also fell flat, so the law remains on the books.

Vukmir, Ott, and other legislators haven’t given up. Earlier this year, they were joined by Sen. Dave Craig (R-Town of Vernon) and Rep. Dave Murphy (R-Greenville) in introducing a modified repeal bill.

This latest effort to relieve Wisconsinites from the burden of higher prices, however, has received the same silent treatment as previous repeal efforts.

Even though minimum markup repeal has hit a wall in the Legislature, a 2015 poll found that Wisconsinites are tired of paying higher prices and want the law taken off the books. The poll was conducted by reputable research firm Public Opinion Strategies and found that 80 percent of respondents had an unfavorable view of the minimum markup law when told “Wisconsin residents are required to pay more for many on-sale items than residents in neighboring states simply because of this 75-year-old law.”

Wisconsinites were just as angry when told that “the law forbids retailers from selling to consumers below cost and also requires that gasoline retailers sell gas to consumers with a minimum 9 percent markup, meaning Wisconsin drivers have to pay more for gas here than drivers do in other states.”

Some retailers have used the law to file complaints with the Wisconsin Department of Agriculture, Trade and Consumer Protection (DATCP) against competitors who were offering items for too low of a price. In 2015, MacIver first reported on numerous complaints filed against Meijer, a privately owned Michigan-based grocery and supercenter chain of stores with more than 200 locations nationwide, as it made its first foray into the Wisconsin market.

The minimum markup law also makes illegal in Wisconsin many of the discounts received on popular national bargain hunting days like “Black Friday” or “Amazon Prime Day,” which in Wisconsin could better be called “Amazon Crime Day.”

With repeal efforts on the rocks once again, bargain hunters should beware: Wisconsin’s Price Police remain on the prowl.