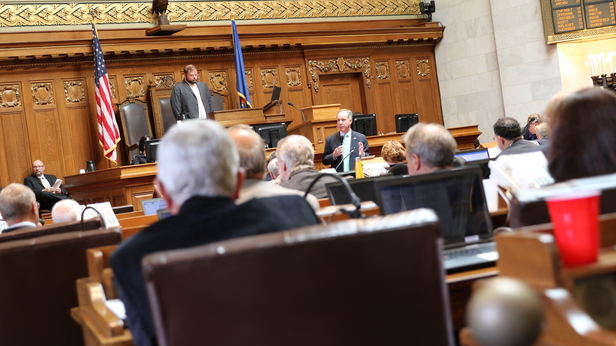 [Madison, Wis…] Foxconn Technology Group is one step closer to breaking ground in Wisconsin after the Republican-led Assembly passed a $3 billion incentives bill on Thursday evening after seven hours of debate.

The amended proposal was approved 59-30 on a mostly party-line vote, with Republicans lauding the “pay-as-you-grow” incentives package and Democrats painting it as a taxpayer giveaway for a Fortune 50 tech conglomerate. Most Republicans voted for the plan and most Democrats against, with some exceptions.

Rep. Cory Mason (D-Racine), who is running for Mayor of Racine, voted for the bill, as did Rep. Tod Ohnstad (D-Kenosha), the ranking Democrat on the Assembly Committee on Jobs and the Economy, and Rep. Peter Barca (D-Kenosha), the Democrats’ Minority Leader. Rep. Adam Jarchow (R-Balsam Lake) and Rep. Todd Novak (R-Dodgeville) were the lone “nay” votes on the Republican side of the aisle.

Citing his free market ideals, Kooyenga said that he didn’t love everything about the bill, but stressed that it would be a once-in-a-lifetime opportunity. “When you have the opportunity to bring an entire industry to Wisconsin, that offers hope for people.”

Rep. Jeremy Thiesfeldt (R-Fond du Lac) echoed the sentiment. “You can’t compete if you’re not in the game. This Foxconn deal puts us in the game.”

The bill includes up to $1.5 billion in refundable tax credits for job creation, but only jobs paying between $30,000 and $100,000 a year would be eligible and credits would only be issued after paychecks are cut.

Skepticism about #Foxconn completely understandable. That's why incentives based on results not promises. No investment in WI = No $ from WI

In a Break-Even Analysis, the review projects the state wouldn’t begin making money on the Foxconn deal until 2042. The Fiscal Bureau notes such a timeline must be viewed cautiously, however.

“(A)ny cash-flow analysis that covers a period of nearly 30 years must be considered highly speculative, especially for a manufacturing facility and equipment that may have a limited useful life,” the LFB analysis states.

While Foxconn would receive up to $1.5 billion in capital expenditure tax credits and sales tax exemptions, the incentives would “induce private investment of $10 billion from Foxconn alone, for a leverage ratio of $6.70 of private investment for each $1 of public outlay,” according to the analysis. The payroll credit would spur a leverage ratio of 5.9 to 1. And those ratios climb higher when indirect and vendor-related jobs associated with the project are factored in.

Democrats took turns expressing their skepticism over the deal, including taking shots at the Fortune 50 company itself. Rep. Gordon Hintz (D-Oshkosh) slammed Foxconn as having “no track record of success,” though the company started in the 1970s making parts for the Atari. Rep. Bob Kulp (R-Stratsford) pointed out that the company’s founder and CEO Terry Gou started his career working in a rubber plant.

.@BobKulp: Any entrepreneur that can go from working in a rubber factory…to producing LCD screens has my admiration and attention.

They also bemoaned the fact that 22 Democratic amendments to the bill failed during last week’s party-line vote on the legislation in the Assembly Committee on Jobs and the Economy. The bill included the original incentives package and a slate of amendments that committee chair Rep. Adam Neylon (R-Pewaukee) said included ideas from both Republicans and Democrats.

Democrats were also skeptical about the number of jobs the manufacturing campus would eventually create. “You know what your priority is, based on this bill? The possibility, the dream, the folly, the fairy tale that you might get 13,000 jobs in exchange for $3 billion,” said Rep. Gary Hebl (D-Sun Prairie). “I’m not going to waste or take a chance or gamble on the taxpayers’ money.”

But Minority Leader Peter Barca admitted that the company is planning to create over 1,000 jobs within the next two years during a debate over a Democrat amendment on worker training. “We shouldn’t wait two years to start a training program. Foxconn’s already going to hire 1,040 workers before then. Let’s make sure our people are trained and first in the queue to get these jobs,” said the Kenosha Democrat, whose district is near where the electronics giant is looking to locate its campus.

Barca was the only member of Democratic leadership to vote for the bill.

Speaker Robin Vos (R-Rochester) jumped on the slip-up. “You said you’re all worried about the jobs never coming,” Vos said, “and now your argument is entirely focused around ‘we need more money quicker because the jobs are going to come too fast for our ability to be able to train them.’ So, are you worried about workers being trained because so many jobs are being created? Or are you worried more about the rhetoric of finding any reason you can to be a naysayer on the largest economic development project in our state’s history?”

“You can’t have it both ways,” Vos said.

After Dems said they doubt #Foxconn jobs would actually come through, @SpeakerVos caught @PeterWBarca in a moment of double-speak. #wiright pic.twitter.com/RNGLXQZ2u6

Indirect jobs, including construction and offshoot industry roles, could total up to 22,000 new positions, according to some estimates.

The legislation exempts the Foxconn project from some DNR permitting requirements, such as wetlands review, and lifts the usual requirement for environmental impact statements that has slowed previous larger-scale development projects to a crawl.

Supporters of the incentives package point out that the wetlands exemption, for instance, calls for more rigorous replacement standards. Opponents expressed concern at other changes, including the waiving of the environmental impact statement.

“Once this company is allowed to decimate our environment, to dump into our streams that’s eventually going to go into our lake, what does that do to our most beautiful important natural resource that we have in the state of Wisconsin?” said Rep. Christine Sinicki (D-Milwaukee).

“We might be the last generation that actually gets to enjoy the beautiful natural resources of southeastern Wisconsin. It’s disgusting to me,” Sinicki said. She also lamented that the Foxconn deal could be a model statewide.

Small business and free market advocates have already pointed out that the Foxconn deal could be a “proof of concept” for removing duplicative, burdensome regulations for all businesses in Wisconsin, including the state’s 440,000 small businesses.

If it's good for #Foxconn, why not the rest of the state's 440,000 small businesses? https://t.co/gYODNKWTjS

The next stop for the bill is the Senate. Senate President Roger Roth (R-Appleton) last week referred the bill to the Joint Finance Committee, which is expected to convene next week.

Speaking with reporters after the vote, Vos said that he’s open to any good ideas from the Senate, but believes the bill passed by the Assembly is a good one and doesn’t expect the Senate to make any changes.

.@SpeakerVos: "I expect no changes" to #Foxconn bill from Senate. Says this bill was agreed to by Gov. pic.twitter.com/YBENT9gEtV