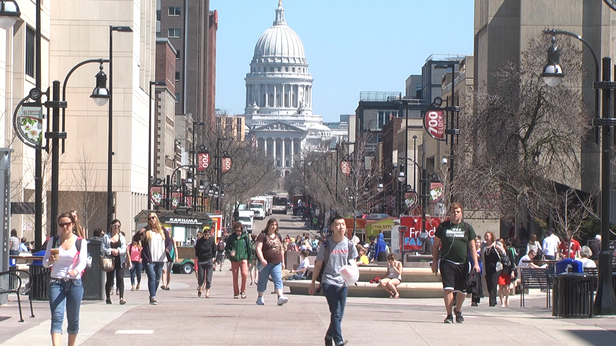 Happy Friday, readers! The Capitol was abuzz this week with indications that Gov. Scott Walker and legislative leaders may soon be reaching a turning point in biennial budget discussions. The Senate GOP caucus released their budget blueprint for consideration, the Governor showed he was willing to compromise in order to get the budget finalized, and the Assembly Republicans made it clear they were not impressed by the Senate’s attempt to move the budget debates forward.

1. Senate GOP Budget Unveiled
On Tuesday, the Senate Republicans released their budget proposal. The plan is quite similar to Gov. Scott Walker’s biennial proposal, with the exception of bonding: the Senate plan would raise bonding to $712 million, up from the $500 million proposed in Walker’s plan.

In an interview with MacIver News Service, Assembly Majority Leader Jim Steineke reacted to the underwhelming reveal by stating “there was nothing new in anything that they said. I found that kind of surprising. I thought there would be some kind of revelation.”

Another surprising change – the Senate’s blueprint calls for the elimination of the Gov’s income tax reduction provision, which would lower tax rates for the bottom two tax brackets and widen the second bracket to tax more income at a lower rate. MacIver Research Associate Ola Lisowski authored the Glide Path to a 3% Flat Income Tax earlier this year, and the Assembly plan calling for a 3.95% flat income tax over a 12-year period seemed to be moving in that direction.

2. Senate K-12 Plan: More Money for Low-Spending Schools, Slightly Expanded School Choice
K-12 education is the other main issue area that has yet to be tackled in the budget decisions. The Senate’s plan released on Tuesday includes stark differences compared to the Gov’s proposal – $24 million more in spending, six additional DPI positions, adjustments to allow for certain districts to increase local property taxes, and an increase in the statewide voucher program’s income limits to 220 percent of the poverty line.

How does @WIGOPSenate's K-12 plan compare to Gov, Assembly? We break the complex plan down here: https://t.co/QZ2VRKhUye#wiedu #wibudget

3. Budget Breakthrough? Walker Deal Trades Income Tax Cuts for Transportation
With the budget three weeks past due, the pressure is intensifying for the Senate, Assembly, and Gov to come to an agreement about key issues such as transportation and education. To break this impasse, Walker offered to shift money for income tax cuts into the transportation fund. Assembly Republicans accepted the suggestion, but Senate Majority Leader Scott Fitzgerald (R-Juneau) made it clear that this compromise is not enough to sway them.

The compromise would stop a gas tax hike, but at a cost. Rep. Dale Kooyenga (R-Brookfield) noted that “if you are going to use general revenue to fund transportation you are going to have higher income taxes [and] by forgoing income tax cuts now we can probably afford greater tax cuts down the road.”

Read more here or listen to MacIver President Brett Healy discuss the surprising situation on the Vicki McKenna Show below:

4. Tween Entrepreneurs Battle ‘Big Brother’ to Sell Ice Cream
The government melted the dreams of two kids who wanted to bike around selling ice cream this summer. Two 12 and 13 year old brothers from Wausau, Nic and Mac Ruffi, wanted to embrace their entrepreneurial spirit this summer rather than play video games all day, but burdensome regulations have stopped them in their (moose) tracks.

Wausau’s new youth vendor city ordinance fee charges a small fee of $15, but also requires parents of the entrepreneurs to take on $100,000 liability coverage and list city of Wausau as an insured party. For many parents, including the Ruffi’s, that’s asking for too much.

The government messed with the wrong momma bear. Sara Ruffi, mother of the young aspiring businessmen and owner and attorney at Ruffi Law Offices in Wausau is fed up with the bureaucracy stopping her sons from their ambitions. Ruffi says “I think the government’s job is to get out of their way and encourage them to be entrepreneurs and follow that spirit rather than say, ‘Hey, we’re going to make it difficult and expensive for you to get into business.’ I think that’s just wrong.”

This story has a happy ending – Rep. Joel Kleefisch (R-Oconomowoc) plans to introduce a ‘Lemonade Stand’ bill to get pesky, burdensome, and arbitrary regulations out of the way for young entrepreneurs. The bill would allow kids under 18 to start small businesses, like the Ruffi boys’ ice cream operation or a lemonade stand.

Angry Wonka would be proud: Wausau regs would cost 12-yr-old entrepreneur $620 just to sell ice cream from a bike:https://t.co/aEPvdzYi3J pic.twitter.com/JT7hbbWauu

.@KleefischJoel to introduce 'Lemonade Stand' bill to get regulators out of the way of young entrepreneurs https://t.co/rWX0r6QpVH #wiright

5. DOT Secretary Warns Budget Stalemate Could Risk Federal Funding
In an address to the La Crosse Area Chamber of Commerce last Friday, Department of Transportation Secretary Dave Ross warned that the budget stalemate could lead to loss of federal funding and delays in projects.

In order to receive certain federal grants, the state DOT needs to show it can match the federal funds. While they are able to shift funds around in the department to make ends meet, Ross emphasizes the need for a budget. “We think we can cobble together enough dollars in the agency to match those grants and not miss that opportunity, but this is not the way we should be running state government. This is absolutely not the way we should be running the state government,” he said.

6. Supreme Court Ruling Prompts New State Private Property Rights Bill
A St. Croix County family wanted to sell one of their lots, but the county, state, and US Supreme Court all denied them since the lot is adjacent to another lot they own. This legal battle inspired Rep. Adam Jarchow (R-Balsam Lake) to introduce a bill to ensure private property violations like this don’t happen in the future.

Jarchow introduced the private property rights bill, also known as the Homeowner’s Bill of Rights earlier this week. He explains that the bill “grandfathers substandard lots, prohibits merger provisions, [and] provides standards with respect to conditional use permits.”

https://t.co/i2K92BS6dS [Madison, Wisc…] A St. Croix County family owned two lots, side-by-side, and wanted to sell one of them. The cou… pic.twitter.com/11UIsOlR2Z

7. Do Wisconsinites Really Want to Pay More for Roads?
The latest Marquette University Law Poll shows that transportation isn’t as much of a priority to Wisconsinites as many claim. Only 23 percent of respondents considered transportation a top priority, while 25 percent viewed healthcare and 37 percent viewed K-12 education as their top priorities.

Interested in more in-depth coverage on any of these issues? Check out our coverage from this week on budget discussions, arbitrary regulations, and more on Twitter.