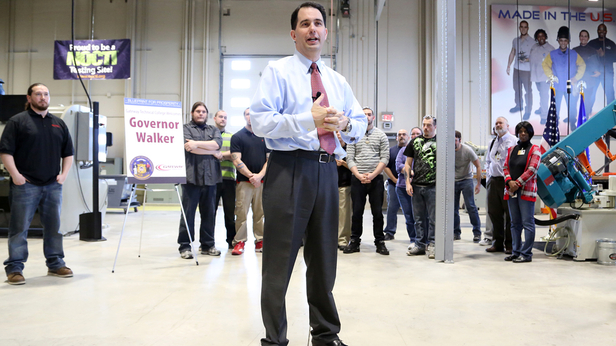 UPDATED at 11 p.m. to include comment from Assembly Majority Leader Jim Steineke (R-Kaukauna)

[Madison, Wis…] In an apparent move to break the stalemate on the state budget, Gov. Scott Walker is proposing cutting $200 million in bonding from his transportation package, a move the Republican governor asserts is a “win for (GOP) Assembly leadership” long critical of borrowing to pay for projects.

But Capitol watchers wonder whether Walker’s latest offer is an olive branch or a stick to beat over the heads of a recalcitrant, Republican-controlled Assembly that has pushed gas tax and fee increases to fill a disputed $1 billion transportation budget shortfall.

One thing is certain: Walker hasn’t changed his mind on tax and fee hikes. In a letter to Assembly Speaker Robin Vos (R-Rochester), and Senate Majority Leader Scott Fitzgerald (R-Juneau), he urges the Legislature to “pass a strong and safe transportation budget without a gas tax or vehicle fee increase.”

“We can pass a budget that provides meaningful increases to local governments to improve roads and bridges – as well as add significant investments in safety and maintenance and highway rehabilitation – all without raising the gas tax or vehicle fee,” the governor wrote in the letter, dated Wednesday.

“We believe this can be accomplished while continuing to keep projects on schedule,” he wrote.

Walker has proposed $500 million in new bonding. The Senate has been kicking around adding $350 million in borrowing onto that. In his letter to Republican leadership, Walker noted that his original transportation budget, presented in September, includes the lowest levels of transportation bonding since the 2001-2003 state budget.

“Lowering bonding by $200 million is a win for Assembly leadership who have voiced their desire to return bonding for transportation projects,” Walker wrote.

Assembly Majority Leader Jim Steineke (R-Kaukauna), said the governor’s offer was a “good step in the right direction,” signaling Walker’s “willingness to move off the position he laid out in his budget.”

“I think that’s obviously a positive step and he’s getting closer to where we are,” Steineke told MacIver News Service Thursday on the Vicki McKenna Show, on NewsTalk 1130 WISN in Milwaukee.

But Steineke said Republican leaders in the Assembly haven’t changed their basic position that set revenue increases are needed to fund and keep critical transportation projects on track.

“If we’re going to do that, our position is you should pay for it as you go as much as possible, because we’ve already taken transportation debt from about 8 to 10 cents on the dollar to up to 20 cents on the dollar and if we increase borrowing in this budget it will go even higher,” the lawmaker said. “We just think that’s unsustainable and without a clear plan to pay that down over time we shouldn’t do anymore bonding at this time.”

Walker said the prospect of moving on several mega projects in southeast Wisconsin is a “win for Senate leadership.”

But banking on the federal government to send back more tax dollars is generally a fool’s errand for state governments.

In his letter to leadership, Walker said all active major projects remain on schedule with “these additions to our proposal.”

“In addition, new revenues will be available for roads in the next budget as the bonds funded by the Petroleum Inspection fee will be paid off and those revenues can be available to bolster the Transportation Fund,” Walker wrote. Sources tell MacIver News more than $30 million in freed-up cash would be available beginning in fiscal year 2020.

Senate Republicans spent much of Thursday in caucus. Capitol insiders told MacIver that the Assembly and Senate remain far apart on transportation.