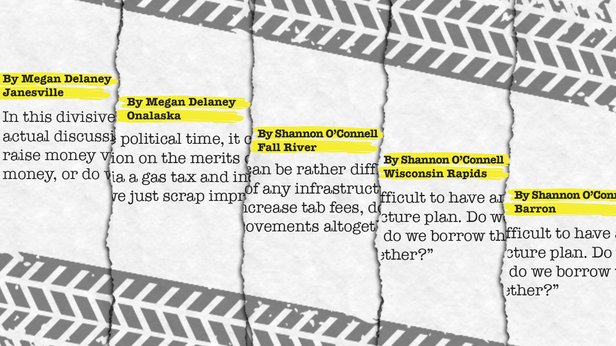 It would appear a letter-writing campaign begging lawmakers to squeeze more money out of motorists for Wisconsin’s roads and bridges is a groundless groundswell.

Supposedly spontaneous letters that have appeared in newspapers around the state have an awful lot in common, including the writers’ names and virtually identical language urging legislators to take action on fixing the state’s roads.

In December and January, letters were published in newspapers from Janesville to Rice Lake with a common just fix it message about the state’s infrastructure problems. The writers went by the names Megan Delaney and Shannon O’Connell. Their letters, according to a MacIver News Service review, used various combinations of the exact same language, each one including this passage almost word-for-word:

“In this divisive political time, it can be rather difficult to have an actual discussion on the merits of any infrastructure plan. Do we raise money via a gas tax and increase tab fees, do we borrow the money, or do we just scrap improvements altogether?”

The letters then sprinkle in some local flavor and several move on to repeat:

“No one wants a raise in taxes or tab fees, but road taxes could be made to be specific to ensure that all money raised goes directly to the roads and not some government slush fund.” 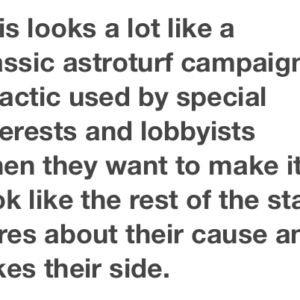 Letters using this and other very similar language appear in newspapers around the state, while the two writers claimed to be from local communities. In the Janesville Gazette on Dec. 8, 2016, a Megan Delaney who claims to be from Janesville wrote a letter headlined, “Put aside differences to fix our roads.”

In the La Crosse Tribune on January 15, another Megan Delaney who says she’s from Onalaska wrote a letter entitled, “We need to fix roads, grow jobs.” Both the Janesville and Onalaska Megan Delaneys declare that “These infrastructure plans are definitely needed in Wisconsin”.

Shannon O’Connell’s name shows up as the author of letters to the editor in at least four different papers. In a letter in the Wisconsin Rapids Daily Tribune on January 19, O’Connell claims to be from Wisconsin Rapids. In that letter, headlined “Good roads will bring more jobs,” O’Connell seemingly copy-pastes both Megan Delaneys’ declaration that “These infrastructure plans are definitely needed in Wisconsin”.

In yet another letter dated Jan. 12, O’Connell claims to be from Fall River in papers serving the nearby cities of Baraboo, Beaver Dam, and Portage. The letter to those papers was titled, “Use taxpayer money to fix infrastructure.” In addition to the verbatim language, the letter cites a local road, Park Avenue, that apparently needs repairs.

O’Connell’s name also showed up in the Rice Lake Chronotype – part of a chain of papers spanning the northern part of the state – on Dec 7. In that paper, O’Connell claims to be from nearby Barron in a letter headlined, “Improve roads, cut down on debt.”

Shannon O’Connell of Barron and Megan Delaney of Janesville both decry borrowing for roads and the benefit of road spending for average working people. “Let’s agree to less debt through unwarranted borrowing, better roads, and a better future for the working class,” both letters implore.

A quick Whitepages search finds no records of a Megan Delaney or Shannon O’Connell living in any of the communities their letters claimed to be from.

Maybe there are two Megan Delaneys and three Shannon O’Connells. Maybe each is very concerned about our transportation infrastructure and sincerely want higher gas taxes to pay for it. But the nearly identical language used in their letters suggests something else may be afoot.

This looks a lot like a classic astroturf campaign, a tactic used by special interests and lobbyists when they want to make it look like the rest of the state cares about their cause and takes their side.

The letters provide cover for proponents of a gas tax increase, who can point to them as evidence that the public is so concerned about transportation funding and crumbling roads that average local citizens are taking the time to sit down and write supposedly uncoached, unplanned, uncoordinated letters to their local papers to voice their concerns.

If this is a coordinated campaign, who is behind it? That’s unclear – but nearly identical letters also appeared in newspapers in Michigan and Washington state, albeit less frequently than in Wisconsin. The name Megan Delaney was used in Cheney, Wash., and the name Shannon O’Connell was used in Ludington, Mich.

Professional astroturf campaigns are hard to spot, but in this case all the letters shared the same passage word-for-word, making it possible to track down with a few Google searches.

These letters could just be the tip of an iceberg.

As I wrote Tuesday, special interests in Madison are desperate to make it seem like there’s a groundswell of average citizens demanding action on road maintenance – and increased gas taxes. Are these interests placing fake letters to the editor in a smoke-and-mirrors PR effort?

The copy-paste language used by these two letter writers, and possibly others that are yet to be uncovered, suggests the answer is yes. It certainly is the same: More taxes for transportation.