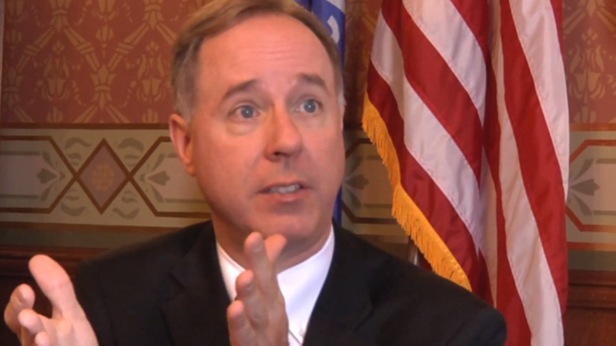 [Madison, Wis…] One of the main players in the state’s budget drama emerged from high-level discussions Wednesday with “deference to the Senate,” but there’s still no deal in sight.

As the stalemate drags on, what is becoming increasingly clear is the Republican-controlled Assembly and Senate are trying to out-conservative one another.

Vos (R-Burlington), said the Republican triumvirate didn’t “go into any great depth about specifics” on the Senate’s budget proposal, unveiled the day before.

“So hopefully over the course of the next week we’ll be able to digest what the Senate said and listen to some of their ideas and see if we can come together,” Vos told reporters.

The Assembly will have to “digest” a spending plan that stays fairly true to Walker’s budget blueprint and stands by his adamant rejection of gas tax hikes and vehicle fee increases. Like Walker’s proposal, Senate Republicans lean on bonding, although more heavily, to fund what they see as the more pressing transportation needs.

That’s a lot to swallow for Assembly Republican leaders who loathe the notion of borrowing to meet funding obligations for a growing list of road projects, preferring a “long-term solution” to fill a disputed $1 billion transportation budget hole.

“Yeah, we saw (Majority Leader Jim) Steineke say (Tuesday) we have problems with bonding at $500 million, which is where Gov. Walker was, so obviously a number significantly north of $500 million doesn’t make sense,” Vos said. The Senate budget plan calls for $712 million in transportation borrowing. “But at the same point, I appreciate the fact that they have ideas on the table and we will attempt to negotiate…”

The speaker said the “vast majority of Americans” believe that improvements to the nation’s infrastructure are critical. Perhaps, but as MacIver News Service’s Chris Rochester reported this week, the latest Marquette University Law School Poll found most Wisconsinites aren’t nearly as concerned about transportation issues as tax-hike advocates have long suggested.

“Marquette’s poll, conducted at the end of June, found that a mere 23 percent of respondents identified transportation as their top priority. More Wisconsinites identified healthcare (25 percent) and K-12 education (37 percent) as their number one concerns,” Rochester wrote.

Senate Republicans and the governor, among others, have derided tax increases as anti-conservative. Vos took aim, conservatively, at that assertion.

“It’s not more conservative to borrow than it is to continue to spend,” he said. “So that’s the Assembly’s position. It’s where we’ve been literally for months, so nothing has changed.”

Doesn’t sound like a recipe for a speedy resolution to the budget impasse. But the two sides – in this case, the same side – continues to talk.

In releasing the budget plan, Fitzgerald said the Senate has been working through the budget process even as the Assembly hasn’t shown the same sense of “urgency.” Vos shot back Wednesday that he’s glad to see Senate Republicans have finally laid out their positions in a proposal.

“The Assembly over the course of the past several months has had positions and we’ve been putting a lot of those out, so you’ve already analyzed where we’ve been on transportation, education, all those kind of things,” Vos said. “So we now want to give the deference to the Senate. They put their plan out, we want to take the time to talk about it and listen. And that’s where we continue to negotiate, try to find the common ground between where the Senate believes they need to be and where the assembly needs to be.”

Democrats, meanwhile, blame the Republican governor, in advance of next year’s election in which Walker will be a formidable two-term incumbent. At an impromptu Senate Dem rebuttal Tuesday, Sen. Jon Erpenbach, D-Middleton, blamed the governor no less than five times before he blasted Republicans at large for “playing the blame game.” Democrats have not presented their own full budget plan because they feel they have been locked out of the process by the majority party, Erpenbach said.